Old Dominion, the Ground and Pound of College Basketball

Being a big New York Jets fan,  I am well aware of Coach Rex Ryan's "ground and pound" philosophy.  It's run the ball, aka use a good "ground" game, and a have a really tough "pounding" defense.  So, when I saw that Old Dominion had beaten Xavier 67-58 in typical tough Monarch defensive fashion to win the Paradise Jam Classic last evening, it all made sense.  ODU is the "Ground and Pound" of college hoops and from all my years of watching the CAA, has been for a long time. The kind of basketball that when the opposing team tries to score inside, the Monarchs say "NOT UP IN HERE!" 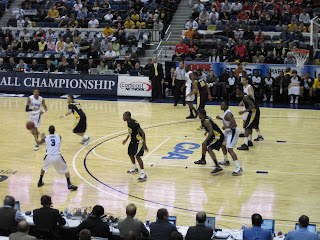 It all starts with their coach, the man with the "stache", Blaine Taylor.  As you can see from the link in the previous sentence, I wrote an article about Taylor back in January 2009.  Taylor is really one of the best in game manager coaches in the country.  And his philosophy is playing physical tough defense and working the ball inside. 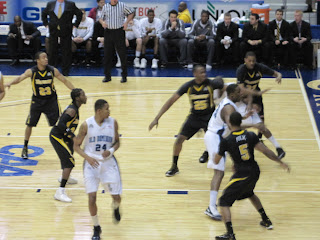 Watching an Old Dominion game is often like watching hockey.  Taylor often shuttles three players at a time into a game as if he was Scotty Bowman doing a line change.  And it works as the Monarchs opposition wears down late in the game.  Take for instance last night's game vs. Xavier.  Mark Lyons hit a three point for the Musketeers to cut the Monarchs lead to one, 52-51 with 6:07 left.   Xavier would then only score six points the rest of the game as they shot 2 of 8 from the field in the game's final six minutes. The Musketeers also did not have one single offensive rebound in the last eight minutes and 45 seconds of the game. 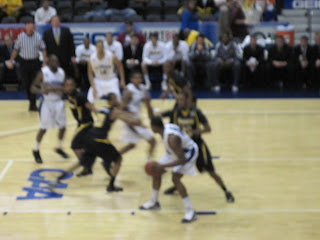 But as you can tell from the number of players that Taylor uses, it's a team philosophy, similar to what Kyle Whelliston wrote about the 2006 George Mason.   For Old Dominion, the whole has been greater than the sum of its parts.   Yes, there have been star players like all First Team CAA players Isaiah Hunter, Alex Loughton and Gerald Lee.  But for each Hunter, Loughton or Lee, there has been an unsung Monarch like Arnaud Dahi, Jonathan Adams and now Keyon Carter.  The guys that come off the bench who play at full throttle, provide suffocating defense and give the team a major spark when necessary.

And thanks to Taylor's philosophy of inside play, suffocating defense and depth that grinds opponents down, the Monarchs win and win a lot.  After nine seasons at ODU, Taylor is 188-103, a 646 winning percentage. Taylor has averaged 20 wins a season in his career and in his past six seasons as coach, Old Dominion is 146-60.  That's an average of  24 wins a season.  During those six seasons, Taylor has led the Monarchs to three NCAA appearances, including last season's first round win over Notre Dame and a NIT semifinal appearance.  Taylor may be one of the most underrated coaches in the game.

But maybe not any more.  By winning the Paradise Jam Classic, the Monarchs knocked off a team in Xavier that went to the Sweet 16 last season, plus knocked off previously another NCAA team from last season, Clemson in the process.  Finally, Old Dominion gave #16 Georgetown all they could handle, leading most of the game before losing to the Hoyas by three.  The Monarchs are no longer a well kept secret.  In fact, someone truly believes they can be a Sweet 16 team this season.  So OK, that person is me.  But still, the Monarchs are that good.

Significant tests remain before conference season starts.  There are home games with Richmond and Dayton, plus a road game vs. #12 Missouri still await the Monarchs.  But one thing is for certain when a team plays Old Dominion.  They best bring their lunch pails, because that team is in for a long day's work against ODU.   And usually that long day ends up in the loss column for the Monarchs' opponent.   Another team grounded and pounded by Old Dominion.
Posted by Unknown at 8:49 PM