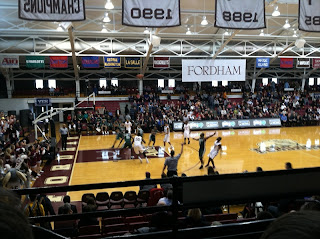 I wanted to do something crazy for the 800 games Played Project.  An opportunity arose a few weeks ago to be able to see three games in one day; Charlotte vs. Fordham, Georgia State vs. Hofstra and Iona vs. Manhattan.  The time schedules were perfect; 1:00 PM, 4:00 PM, 7:00 PM.  With a little luck and a lead foot, I thought I could make all three games.


When I planned out my triple header for yesterday, I noticed that the three games all had something in common; Hofstra.  Thus the theme for all three stories is the "Six Degrees of Hofstra Separation". The first of the three games involved Charlotte at Fordham at Rose Hill Gym.  Fordham is coached by Tom Pecora, the former head coach of the Pride.

Pecora was first an assistant at Hofstra under Jay Wright, whose teams made back to back NCAA Tournaments in 2000 and 2001, as well as a NIT appearance in 1999.  When Wright left for Villanova, Pecora was hired as the coach.  Under Pecora, the Pride had three straight NIT appearances in 2005, 2006 and 2007.  Yes, we all know about 2006.  Let's not go there. Hofstra also had four twenty plus win seasons under Pecora as a head coach.

He is also known for being a strong recruiter, especially when it comes to guards. Speedy Claxton, Norman Richardson, Rick Apodaca, Loren Stokes, Antoine Agudio, Carlos Rivera and Charles Jenkins were all very successful Hofstra guards that were recruited by Pecora.   Three of those players; Claxton, Richardson and Jenkins have played in the NBA.  Apodaca played for Puerto Rico in the Olympics.  Jenkins was three times the Haggerty Award winner for the best player in the New York City metro area.  Stokes and Jenkins were both CAA Players of the Year (Jenkins twice).  Agudio and Stokes were each two time First Team All CAA players. 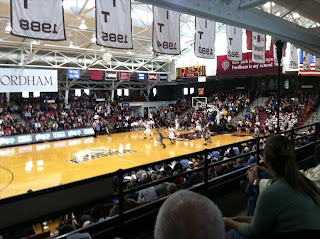 That brings us to Pecora's latest talented guard, Branden Frazier.  Frazier originally was recruited for the Pride in Pecora's final season as head coach of Hofstra.  But when Pecora left for Fordham, he took Frazier with him.  Last season, Frazier averaged eleven points per game in his freshmen season while playing mostly point guard for the Rams.  His best game was his sixteen point effort in Fordham's home upset of St John's, where he  went three of four from beyond the arc and added five assists.

In his sophomore season, Frazier has moved to the two guard as the Rams have Devon McMillan playing the point.  While sitting in the Xavier section for Fordham's game against the Musketeers,  I was very impressed with Frazier's improvement.  Against one of the best teams in the Atlantic Ten, he had twenty two points, five steals, five rebounds and three assists.  It was the classic stat sheet stuffer performance I have seen from so many Pecora guards over the years.

When my son Matthew, my friend Tieff and I got to our seats up in the balcony of Rose Hill Gym yesterday a few minutes before another Saturday Mass, the gym was surprisingly nowhere as filled as it was for the Xavier game. Yes, I know the 49ers are not quite the Musketeers, but Pecora has brought an energy to the Rams' fan base.  As I suspected, it turned out it was a late arriving crowd for the game that was on the YES network.  Once we were a few minutes into the game, Rose Hill was filled pretty well as the listed crowd was near 2,500. 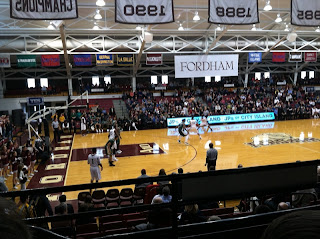 One of the more frustrating aspects about college basketball nowadays is teams' over-reliance on the three point shot.  The early action in the Charlotte-Fordham game was an excellent example of that.  Players on both teams were camped out on the three point line, while the ball movement and player movement off the ball were lacking.  In the first seven minutes, of the twenty shots taken, twelve or sixty percent of those shots were three pointers.  Fordham missed five of their seven three point attempts in the first seven minutes.

But after those first few minutes, both teams realized that they had a inside presence on offense.  For Charlotte, that was Chris Braswell.  Braswell actually scored the team's first four points but was a key in their 9-0 run late in the first half to put the 49ers up 27-16 with five minutes left.  Braswell would have nine first half points for Charlotte. 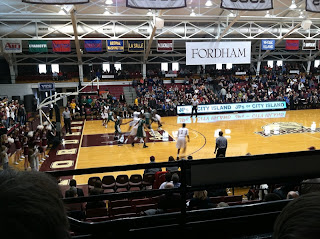 As for Fordham, the Rams started going to their double double machine, junior forward Chris Gaston.  Gaston is simply relentless inside. He scored ten first half points to keep Fordham in the game as they were only down 32-28 at the half.

At the start of the second half, Fordham quickly outscored Charlotte 6-0 to take a 34-32 lead.  But Jamar Briscoe buried two long three pointers to put the 49ers back up 38-34.  The teams would exchange the lead a couple of more times and the game was very close for the first ten minutes.  Charlotte was only ahead by one, 48-47 with ten minutes left.

But the 49ers extended that lead with a 8-0 spurt as a result of five offensive rebounds in the span of five minutes.  This was due in large part to Braswell and DeMario Mayfield.  The duo combined for thirty seven points and twenty six rebounds as each had a double double on the game (Braswell 20 and 12, Mayfield 17 and 14).  The 49ers outrebounded the Rams 53-36 with eighteen offensive rebounds.

Gaston did his best to keep Fordham in the game as he scored fifteen second half points to score twenty five for the game.  He shot ten of seventeen from the field and added fourteen rebounds as well.  He hit a layup to cut Charlotte's lead to four, 60-56.  With the under four minute media timeout, the Rams were still down only four, 62-58 and the Rose Hill crowd was soundly into the game now. 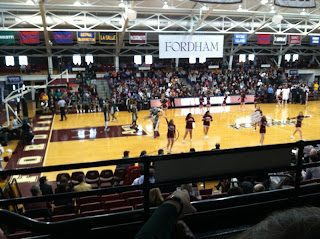 Despite Gaston, the problem was the rest of the team was ice cold from the field.  The Rams shot only twenty seven percent in the second half.  This was due to the previously mentioned over reliance on the three pointer.  Subtracting Gaston's field goal attempts, the Rams had fifty one other field goal attempts on the game.  Over half, twenty six of them were three point attempts.  Of those twenty six, Fordham hit only six, including going two of fourteen in the second half.

And no one was colder than Frazier.  Frazier hit his only two three pointers in the first half.  In the second half, Frazier was one of six from the field and two of nine overall from beyond the arc. A series late in the game highlighted Frazier's struggles on the day.  With a little over one minute left in the game and the Rams down five points, 65-60, Frazier had an open look for a three pointer. He missed the three, then right afterwards committed his fifth foul.  Frazier only had eight points on the day, four under his average on the season.

Charlotte would go on to win 69-62.  It was only their third win in the Atlantic Ten this season. But the 49ers evened their overall record at 11-11. 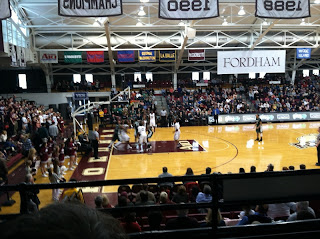 As for Fordham, 9-13 overall, it was only their third loss at home on the season in eleven games at Rose Hill Gym.  Considering that they only had two overall wins in the 2009-10 season, that's definitely an improvement.  Pecora has to be somewhat pleased with their home record and that his team already has more wins this season, nine, than last season, seven.  They also have already two conference wins, more than last season.

But for a coach that's used to having several twenty plus win seasons, Pecora knows that he still has a lot of work to do.   Fortunately for him, he has Gaston, Frazier and Bryn Smith, who had fourteen points yesterday, all returning next season.  The Rams will continue to improve.  But as yesterday showed, there will continue to be growing pains along the way for a rebuilding Fordham program.
Posted by Unknown at 10:53 AM