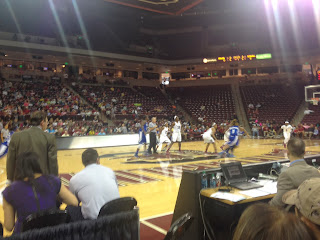 In August of 2012, I accepted a position at the University of South Carolina School of Law.  After forty six plus years of living on Long Island, I made the biggest move of my life and left for Columbia, South Carolina. It's only been fifteen months, but my family and I are truly happy here. It was a move that worked out for the best.

In late March of this year, Tony Bozzella accepted the Women's Head Basketball Coach position at Seton Hall.  In Coach Bozzella's case, he was coming back home to his alma mater after eleven seasons at Iona.  It was while at Seton Hall that he first started his coaching career as the head coach of St. Mary's High School, now known as Cardinal McCarrick, in South Amboy, New Jersey.  But that was not the most important part of his undergraduate years at Seton Hall.    The most important part was meeting there his future wife, Maria, who is also a Seton Hall graduate. 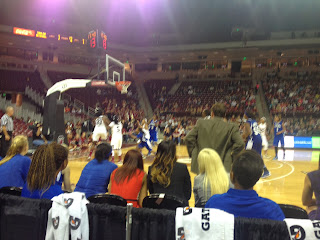 For Coach Bozzella, Seton Hall is just another in the list of reclamation projects he has overseen in his twenty one years as a head coach.   His first job was SUNY Southampton, where he took a perennial doormat ECAC team and took them to six straight winning seasons.  Then he received his first Division I head coaching position at LIU Brooklyn.  In his very first season there, he guided the Blackbirds to their first ever NEC Tournament Championship and their only ever NCAA Tournament appearance.  In his second and final season, he took LIU Brooklyn to the championship game before losing to St. Francis PA.

Then he took the head coaching position at Iona College.  Over his eleven seasons there, he led Iona in 2005-06 to their first ever winning season in twenty three years. In 2006-07, he guided Iona to their first ever postseason appearance, a WNIT bid.  He would take the Gaels to three more WNIT appearances and in his last seven seasons with Iona, the Gaels had an 85-56 MAAC conference record. 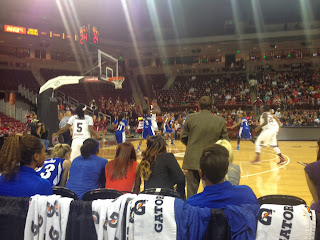 Bozzella has always had a sense of family and loyalty as far as his coaching staff.   His Iona coaching staff has been made up over the years of former players for Southampton, LIU Brooklyn and Iona.  His Seton Hall coaching staff is no exception.  Lauren DeFalco, a former star guard at Iona, Melissa Flagg, another former starting Iona Gael guard and Timothy Gardner served as assistants for him at Iona.

When I found out that Coach Bozzella's Pirates were going to be in Columbia to face the Gamecocks on November 17, it was the genesis of what turned out to be a  three day sports weekend for our group of friends.  As I noted in my previous post, my friends Mal and Tieff flew down Friday morning and we spent Friday night in Charleston watching UNC Asheville defeat the College of Charleston in overtime.  We were then joined on Saturday by our friend Den Bashuk and his friend Neal to watch SEC Football as South Carolina rallied at home to defeat Florida. 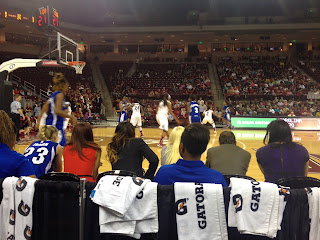 Sunday was not only a big day for my friends, but for me personally.  November 17 also happened to be my younger son Jonathan's sixth birthday.  He woke up about 7:00 AM and not too long after, we were opening his birthday presents.  Later, my entire family met up with my friends for brunch at Liberty Tap House and then we made our way to Colonial Life Arena.  Once there, we joined up with Maria and the rest of the Bozzella family, Samantha and Joseph and caught up on old times.

Seton Hall had won their first three games, the latest being an impressive 78-61 win over Weber State last Friday night.  However, on Sunday the Pirates were missing three of their starters - Bra'Shey Ali, Alexis Brown and Sidney Cook, all due to injuries.  They were facing the #21 team in the country in Dawn Staley's  3-0 Gamecocks on their home court, a tall order even for a fully healthy team. 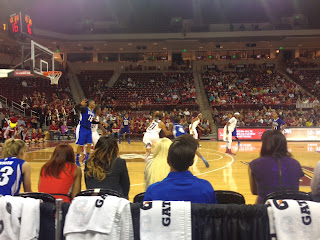 South Carolina responded with two free throws by Khadijah Sessions, another free throw by freshman sensation Alaina Coates and a three point play by Ibiam to go up 10-7.  Seton Hall would answer as Richardson Smith would tie the game at thirteen with another three pointer.  Then after Aleighsa Welch would put the Gamecocks ahead again with another free throw, Ka-Deidre Simmons hit a jumper to put the Pirates back up one, 15-14.  Simmons would hit another jumper to give Seton Hall an 18-16 lead. 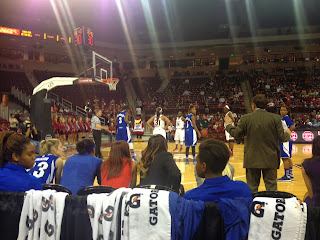 However, the foul toll was mounting on short handed Seton Hall.  In barely a little more than ten minutes, the Pirates had fourteen fouls. Janee Johnson already had three fouls with 10:45 left in the first half.  Bozzella, who was only dressing nine players, used his entire bench in the first half, basically out of necessity.

And yet not only did the Pirates hang in there against the talented, taller Gamecocks, they actually rallied from a late six point first half deficit with 7-0 mini spurt, capped by another basket by Richardson-Smith to put Seton Hall up 39-38 with about a minute left.  Asia Dozier would answer for South Carolina with a three pointer to put the Gamecocks up two.  Simmons missed on a jumper at the buzzer but the Pirates were only down two, 41-39 at the half. 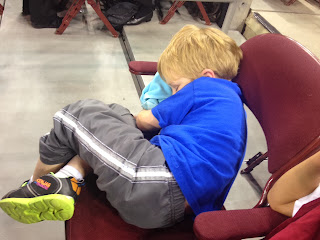 Seton Hall actually hit six more shots on fourteen more attempts in the first half than the Gamecocks including five of nine from beyond the arc. But the Gamecocks went to the line in the first half more than most teams do in a game with twenty seven attempts.  South Carolina hit on twenty one of those free throw attempts, seventeen more than Seton Hall (four of five from the line).

During halftime of South Carolina Women's Basketball games, kids can dance with Cocky on the court. Jonathan had a chance to celebrate his birthday by dancing as well.  He decided he didn't want to go out there.  Then I found out why; he was tired from being up early that morning.  A short while later, he was asleep in his seat.

At the beginning of the second half, Dozier picked up right where she left off with another three pointer. It would start a 16-4 run, culminated by two Tiffany Mitchell three pointers and a Sessions layup to put the Gamecocks up 57-43 with 14:23 left in the game. It looked like the Hall was about to be blown out of Colonial Life Arena. 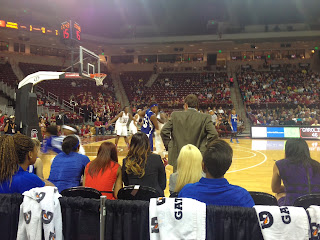 But the Pirates refused to quit and came back with a 10-4 spurt.  Richardson-Smith would score another five points and a Simmons layup would cut the South Carolina lead to eight, 61-53 with eleven minutes left.  Seton Hall was only down ten, 64-54 with ten minutes left.

But the Gamecocks size and post play was too much for the Pirates.  After Seton Hall was still within eleven, 72-61 with about six and a half minutes left,  Ibiam went to work.  She would score the next seven Gamecocks points, on three short jumpers in the post and a free throw.  It would swell to an eventual 12-2 run that put South Carolina up 84-63.  The Gamecocks would go onto win 88-67. 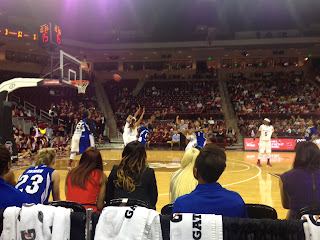 The Gamecocks shot an impressive nearly seventy four percent from the field in the second half, hitting seventeen of twenty three shots.  The Pirates actually had as many field goals, twenty six and as many three pointers, six, as the Gamecocks.  However, South Carolina had twenty one more free throws than Seton Hall and that was the difference in the game.

As the game was ending, I heard Coach Bozzella turn to his bench and say "Good Effort".  Considering he was missing three starters, his team was only down two points at the half and were only down ten with ten minutes left, it was a good effort.  The Gamecocks were just too strong in the paint for the shorthanded Pirates, who only committed eight turnovers on the game (South Carolina only committed eleven turnovers). 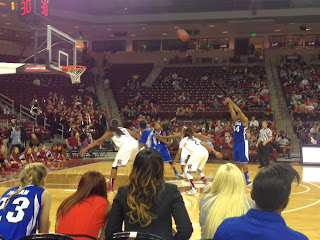 The Gamecocks had five players in double figures in scoring.  Ibiam led the way with eighteen points, Sessions added seventeen, while Welch and Mitchell each had fifteen and Coates added ten points. Richardson-Smith led Seton Hall and all scorers with twenty four points while Simmons added nineteen.

We said our goodbyes to Maria, Samantha and Joseph, along with Mal and Tieff.  We couldn't stay because Jonathan wanted to have his birthday dinner at his favorite place...McDonalds (hey, he is only six).  Plus I knew I would see them again later next month when they play at St John's during our Christmas in New York vacation.

It was good to see an old friend who was able to go back home to his alma mater.  For Tony Bozzella, considering his track record, it will be for the best too.
Posted by Unknown at 10:01 PM