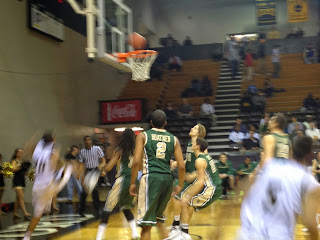 When you have two young boys, weekends during the holiday season revolve around Christmas light shows and various other festive events.  Such was the case this weekend for my family.   Friday night was the "Lights Before Christmas" at the Riverbanks Zoo, which showcases nearly a million lights in the zoo setting, plus if you're lucky, you get to see a tiger pace about during the night setting.

Several days ago, I was looking for a college basketball game in the area to watch on Saturday.  It's not quite the same in South Carolina as it was in New York.  In New York, I had several local schools - Hofstra, Stony Brook, St John's, Iona, Manhattan, Wagner and LIU Brooklyn, to name a few, all located within a hour's drive.  Plus, I had a quick train trip to New York City to see many games at Madison Square Garden. 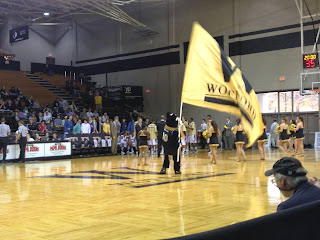 There are a lot of Division I schools in South Carolina - South Carolina, Clemson, College of Charleston, Charleston Southern, Coastal Carolina, The Citadel, Winthrop, Wofford, USC Upstate, Presbyterian and Furman.   The problem is outside of the University of South Carolina, where I work, the closest school to me is Winthrop, which is over an hour away by car (Presbyterian is a very close second).   In fact, Charlotte and Davidson are closer to me than say Wofford or USC Upstate.

So, unless USC is playing a home game, other Division I Men's Basketball weeknight games in South Carolina are very difficult for me to cover (and that's while I will be covering more USC women's games, plus the fact that they are a good team). If I am going to see a non USC college basketball game, it's going to be on the weekend. 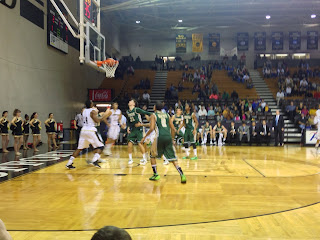 Thus, when the opportunity came up to see William and Mary play at Wofford, I knew my color analyst, aka my older son Matthew would go with me.  The trick was trying to make it into a festive event trip so that my wife and my younger son could go as well.   Sure enough, Hollywild Park, a wildlife park located 25 minutes from Wofford in Inman, South Carolina, is having their annual "Holiday Lights Safari Benefit".  I was able to convince Chelle to bring Jonathan for the ninety minute drive from our house to Spartanburg, where Wofford is located. 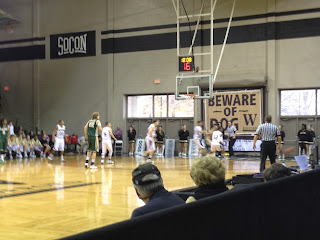 The Southern Conference is in a state of flux as four current members will be leaving after this college basketball season; Davidson (A-10), Appalachian State (Sun Belt),  Georgia Southern (Sun Belt) and Elon (CAA).  They will be replaced by East Tennessee State, Mercer and VMI.  The SoCon, as it is affectionately known, already lost the College of Charleston to the CAA this season.

We got to the campus parking lot about thirty minutes before game time.  This was my second time here, having gone to a Davidson-Wofford game last season.  The Johnson Arena is located in the Campus Life Building on the campus of Wofford.  This time, we passed up lunch in the student cafe and headed to our seats in the East section of Johnson Arena.  As I noted in last year's post, there are two wings to Johnson Arena and they are only interconnected by a hallway inside the Campus Life Building.  Thus, if you are on the west wing, you have to walk that hallway to get to the East wing section of the arena. 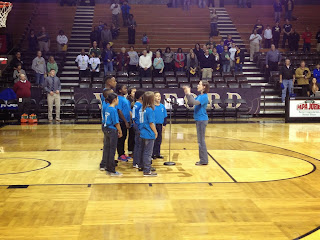 I had purchased our tickets for the game online only a few hours before we left for Spartanburg.  Having remembered the arena, there is a reserved section with individual seats and the general admission area which is wood bleacher seats.  The nice thing is that the price of a reserved seat is only a couple of dollars more than a general admission seat.  So it is worth the extra two bucks to sit in more comfort, especially when you luck out and have front row seats as we did yesterday.   It also gave us a great view of the school choir that sang a nice rendition of the national anthem before the start of the game. 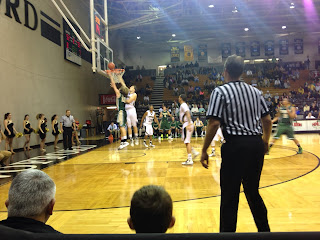 For Matt and me, it was our second William and Mary game in the span of about ten days.  The Tribe had won at home by thirty points over VMI on Thanksgiving Eve.  And they did it in large part due to their new found inside game, jumping out to a 30-11 lead by working the ball inside to "Beasthoven", senior forward Tim Rusthoven.

After Jaylen Allen gave the Terriers an early 2-0 lead, William and Mary used that aforementioned inside game to score the next four points on a a Kyle Gaillard layup and a Beasthoven jumper.  After each team missed their next three shots, Wofford's Lee Skinner hit a jumper to tie the game at four. 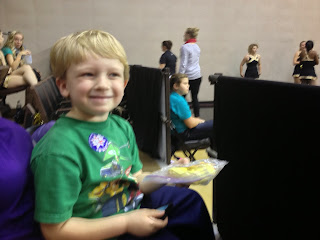 During the first media timeout, Wofford had their usual "Cheeseburger in Paradise" promotion, in which the cheerleaders handout/toss free McDonald's cheeseburgers to the crowd.  Sure enough, Jonathan and I got free cheeseburgers (I got one the last time I was at Wofford).   I think Jonathan was happier with the free fries coupon that came with the cheeseburgers.

Scoring would become even more a premium over the next ten minutes.  During this time, the Tribe outscored the Terriers 15-6.   Outside of a Marcus Thornton three, William and Mary scored all their points on either layups or free throws, as they continued to work their inside game on Wofford.  With about six and a half minutes left in the first half, the Tribe were up 19-10. 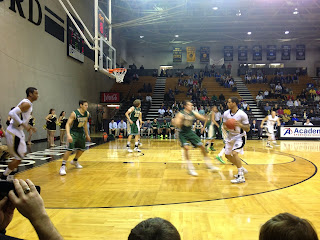 Johnson Arena is not a very large arena.  It's really more a nice, small gym that seats about thirty five hundred.  Yesterday, the announced attendance was a little more than a thousand and it certainly seemed sparse.

However, Johnson Arena holds sound well.  Really well.  And when the Terriers went on 11-2 spurt over the next four minutes, the Wofford fans showed Coach Tony Shaver and the rest of the Tribe of William and Mary just how loud Johnson Arena can be, even with only a thousand fans.  When Terriers' guard, Indiana Faithfull, an Australian senior with a name that the movie "Hoosiers" would love, tied the game with at twenty one with two free throws, the arena had the atmosphere of a sold out, first place on the line conference game.  And the game would enter halftime tied at twenty seven. 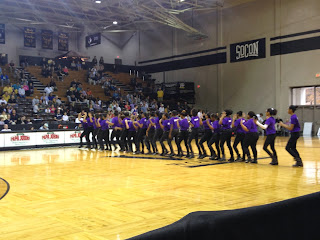 What I have always loved about mid major basketball games is often there is unique halftime entertainment. Yesterday was no exception as the crowd was entertained by a middle school stepping team.  They were quite good and received a loud ovation from the fans.

As I noted earlier, I was here in February as Davidson defeated Wofford.  But in that game, Spencer Collins, a freshman at the time, really impressed me with his play.  He had a career high 24 points in that loss to the Wildcats, going 10 of 19 from the field.  Now a sophomore, Collins is leading his team in scoring, averaging 14.4 points per game.  And Collins came out strong in the second half, hitting a three pointer to give Wofford their first lead since the first minute of the game, 30-27. 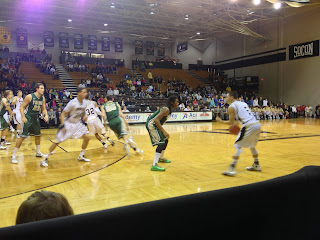 But Beasthoven, the Tribe's third leading scorer at 13.7 points per game, would score five straight points for William and Mary.  His three point play put the Tribe back up 37-34. A short time thereafter, Gaillard buried a three pointer to put William and Mary up four, 40-36.

The Tribe went cold though for the next three and a half minutes missing two shots and committing two turnovers.  The Terriers took advantage with a 7-0 mini-spurt, capped by an Allen jumper to give Wofford a 43-40 lead.  Allen would hit another jumper later to maintain the Terriers three point lead, 45-42 with eleven minutes left. 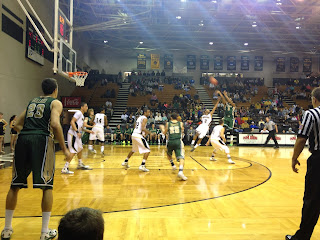 But William and Mary would respond with their own mini-spurt, a 10-3 run, as they continued to work the ball inside.  Terry Tarpey hit one of two free throws to give the Tribe a 52-48 lead with 6:15 left.  William and Mary had chances to extend the lead but the Tribe missed four free throws over the next four and half minutes.  And Wofford took advantage, tying the game at 57 on a Collins three pointer with a minute and a half left in regulation.

But after the Terriers called timeout, the Tribe's Julian Boatner hit a sweet layup to put William and Mary up 59-57 with 1:25 left.  But again, the Tribe missed opportunities at the free throw line to extend the lead.  Gaillard and Boatner each only hit one of two free throws to put William and Mary up four 61-57 with thirty five seconds left.  Faithfull made them pay with a three point play to cut the lead to one, 61-60 with thirty seconds left. 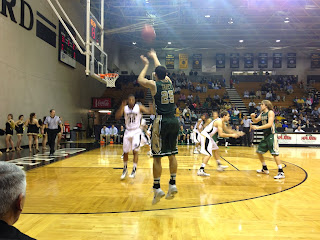 All the missed free throws would seemingly haunt the Tribe after Omar Prewitt lost the ball in the backcourt, giving the Terriers a chance for the last shot and the victory.  But Allen missed an open look jumper with six seconds left and Wofford was forced to foul Gaillard with one second left.  This time, Gaillard hit both free throws and William and Mary escaped with a 63-60 win.

Beasthoven led all scorers with seventeen points and Thornton added fifteen points for the Tribe. William and Mary, who have now won four of their last five games, shot fifty six percent from the field including a blistering 19 of 29 from inside the arc. The Tribe did hurt themselves only shooting 13 of 22 from the free throw line (fifty nine percent).

Collins led the Terriers with fifteen points, but he was only 4 of 16 from the field, though he was 5 of 6 from the line.  Allen added thirteen points and guard Karl Cochran, all six foot one of him, nearly had a double double with eleven points and nine rebounds.  Wofford had fourteen more shots than William and Mary, but made two less field goals and only shot thirty eight percent for the game.  Shooting 14 of 18 from the charity stripe kept the Terriers in the game. 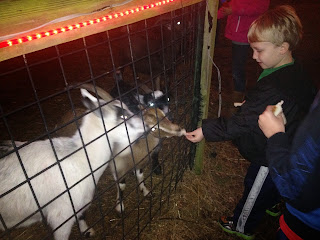 After we left Wofford, we went out to dinner and then went to Hollywild Park to see the light display, as well as watch deer, cows and zebra walk up and put their heads in cars for a slice of bread.  My family and I tried to get a couple of cows and some deer to walk up to our car, but the sheer number of cars there were scaring off the deer. Later we visited "Santa's Village" as Matthew and Jonathan got to play with puppies and baby deer.