It's All About the D Part 2 - Relentless (Recap of Ole Miss vs. South Carolina) 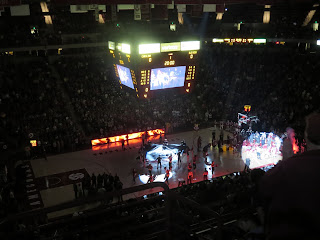 Later on in the day after our team won our first basketball league game of the season, Matt and I went to the Ole Miss-South Carolina Men's Basketball Game Saturday night.  Our day ended as it started - with tenacious defense. 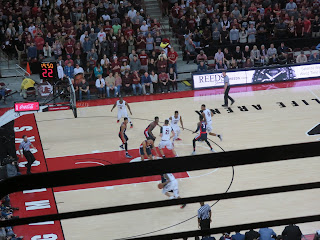 This is Frank Martin's fifth season at the helm of the Gamecocks.  He started at USC at the same time, I did, the summer of 2012.  I had always appreciated his Kansas State teams' defense.  It took him a while, but starting with his 2014-15 team,  the Gamecocks started playing very good defense.  After inheriting Darrin Horn's team that didn't have much talent, Martin's teams started improving their record season after season.  Last season,the Gamecocks went 25-9, including 11-7 in SEC play.  Only an upset in the SEC Quarterfinals to Georgia 65-64 kept them from making the NCAA Tournament, despite having beaten eventual NCAA Tournament team Vanderbilt in their only regular season contest. 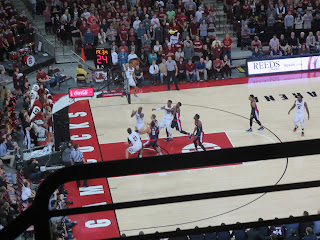 This season, the Gamecocks started off strong, winning their first eight games, including a neutral site win over Syracuse and home wins over Michigan and Vermont (don't laugh, they're in first place in the America East at 5-0 and 14-5 overall).  Then Sindarius Thornwell, the Gamecocks leading scorer and first team all SEC defensive player last season, was suspended for eventually six games for violating team policy.   The Gamecocks struggled without Thornwell, going 3-3 with two close losses to Seton Hall and Clemson, along with a thrashing at Memphis.

But Thornwell came back for the start of SEC play and it was like South Carolina hadn't missed a beat.  First they won at Georgia 67-61, holding the Bulldogs to thirty eight percent from the field, four of thirteen from beyond the arc and forced sixteen Bulldog turnovers.  Last season, the Gamecocks lost all three games they played versus the Bulldogs. 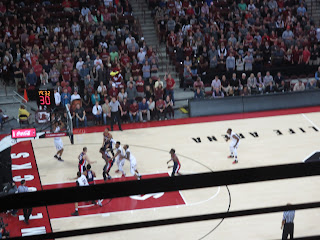 Then came a hard earned, come from behind win at home vs. Texas A&M 79-68, where they forced the Aggies to commit twenty five turnovers, which gave South Carolina thirteen more shot attempts. Finally, the Gamecocks traveled to Tennessee and downed the Volunteers 70-60.  South Carolina forced twenty two Tennessee turnovers and held the Volunteers to thirty nine percent from the field and unseemly one of eleven from beyond the arc.

So in three SEC games, the Gamecocks forced sixty three turnovers, an average of twenty one per game.  Watching them play against Ole Miss, it's easy to see why. 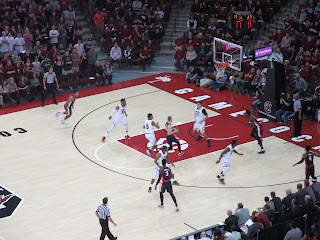 Second, the Gamecocks contest every dribble, every pass, every shot. South Carolina is eleventh in the country in steal percentage and it was evident early on as Ole Miss turned the ball over five times in five and a half minutes.   Ole Miss, who was missing their leading scorer, Deandre Burnett, due to injury, would only score two points in the first six and a half minutes.  It was due in large part to the tenacious South Carolina defense, as the Gamecock defenders would pick up their man right after the ball was inbounded and they trapped Ole Miss at half court.  Kotsar was particularly impressive early on, grabbing rebounds and adding a block shot. 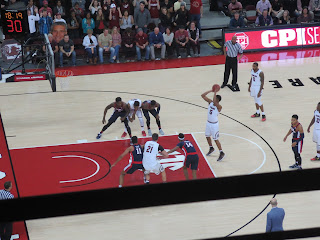 But the Gamecocks couldn't take full advantage of their defense, missing on twelve of their first fourteen field goal attempts, Dozier made USC's first two field goals, including a three pointer he was fouled on.  Dozier hit the free throw for the four point play and four other free throws by Thornwell and Silva gave South Carolina the early 10-2 lead. 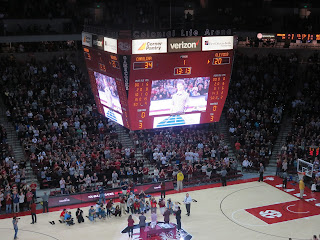 At halftime, the Gamecocks honored their Rhodes Scholar, Jory Fleming, who has a perfect GPA and also has autism.  Jory has been the subject of several, wonderful national news pieces.  Jory was given several gifts, including an autographed football helmet given to him personally by USC football coach, Wil Muschamp.  It was a touching ceremony and the 15,000 in attendance gave Jory a standing ovation.

At the start of the second half, South Carolina outscored Ole Miss 7-1 to go up twenty, 41-21.  The lead was 46-28 with 13:56 left after two Silva free throws. Both teams would not score for nearly three minutes until two more free throws by dynamic USC reserve Rakym Felder, who scored twelve points off the bench in the contest. 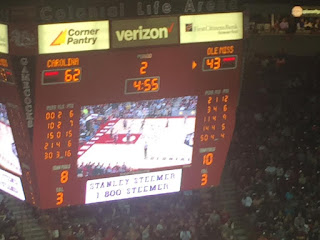 The Gamecocks lead would swell to twenty five, 61-36.   The Rebels would outscore the Gamecocks 20-6 the rest of the way but not before actually having four players on the court with four fouls each.  South Carolina would win the game 67-56.

The game was not pretty for the most part.  Ole Miss turned the ball over twenty one times, keeping with the average the Gamecocks have forced on a SEC game basis.  But South Carolina turned the ball over twenty times themselves.  Both teams shot under thirty seven percent from the field.  USC went to the line and had thirty one free throw attempts, almost hitting as many free throws, twenty two, as Ole Miss had attempts, twenty three.

At the end, it was an ugly but effective win for South Carolina.  At 4-0, they are right in the thick of things in SEC play.  They need to improve on their offensive sets, but after watching their defense play for forty minutes, I can tell their future SEC opponents that one word sums up the Gamecocks defense.

Relentless.
Posted by Unknown at 12:50 PM