CAA Tournament - Lovely To See You Again My Friend

When Hofstra moved to the Colonial Athletic Association starting in the 2001-02 season, the first CAAHoops tournament the Pride was in down in Richmond, I was sitting at home in Seaford, NY, listening to the games on WRHU radio.  Chelle and I were renting an apartment on the side of a house from my brother's long time friend Tom Graziose. 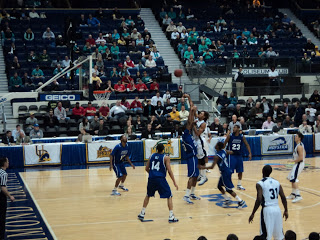 The 2001-02 Hofstra season was somewhat similar to the 2016-17 Hofstra season.  The Pride started out the season 4-2, including a win over an eventual Elite Eight team in Kent State.  Then the wheels came off the car, as Hofstra would lose sixteen of their next twenty one games, including their last seven regular season games in conference (Hofstra would start 9-5 this season before a rough stretch in CAA conference play).

Yet in the 2002 CAA Tournament, the #10 seed Hofstra remembered that it had some talent with Rick Apodaca, Danny Walker and others.   They pummeled the #7 seed Towson 72-52 in the first round play in game.  Then in a quarterfinal against Jerry Beach's all time favorite coach, Jim Larranaga, and #2 seed George Mason, the Pride pulled off a huge upset and knocked out a Patriots team that had won thirteen conference games, defeating them 82-76.  Hofstra would lose their semifinal game to VCU 70-54. 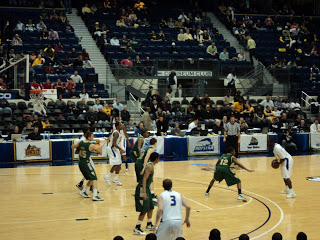 It would turn out to be only one of two times from 2002 to 2012 that I didn't attend the CAA Tournament in Richmond.  Starting in 2003, I would attend nine of the next ten CAA Tournaments. There are so many memories, including spending my last CAA Tournament on press row.  From the first tournament in 2003, seeing Woody Souffrant play the game of his life for Hofstra in a quarterfinal loss to eventual CAA champion UNCW, to the 2006 tournament where Hofstra proved it was the better team than George Mason in the CAA Semifinals, despite an underhanded punch to the groin by Tony Skinn, to the 2012 tournament and seeing George Mason nearly coming back from an early 32-4 deficit vs. VCU, the CAA Tournament always provided a signature moment with this college basketball fan.  You'll see pictures from several CAA Tournaments I have attended sprinkled throughout this blog post. 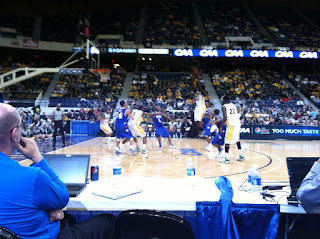 Then in the beginning of August 2012, I accepted a position with the University of South Carolina School of Law.  I would move down to Columbia, South Carolina in the middle of August and the rest of my family would join me six months later after we sold our house in North Bellmore, New York.    In February 2013, I would get involved in Little League down here, head coaching one team and assistant coaching another team, before eventually joining the Trenholm Little League Board.   As a result, I would not attend the last four CAA tournaments in Richmond and Baltimore respectively.

Then a funny thing happened.   Realizing that Baltimore was not drawing respectable size crowds (the 2016 championship game drew only 3000 fans), despite being a midway point between the farthest northern point in the conference - Boston - Northeastern, and the farthest southern point in the conference - Charleston - College of Charleston, CAA officials decided to go to where the crowds in #CAAHoops are (UNCW and CofC are the #1 and #2 teams in home attendance) and agreed to play in North Charleston Coliseum for the next few seasons. 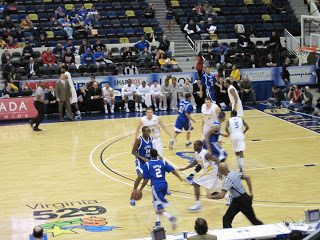 So what will the CAA Tournament be like this year.  UNCW is the favorite, having finished first in the regular season with a 15-3 record, just like they did in the 2002-03 season.  College of Charleston is the #2 seed, having finished with a 14-4 record.   Both teams should bring a good number of fans and you figure the North Charleston Coliseum, which seats a little over 13,000, should be at least half full, which is a lot better than the 3000 attendance figure for the 2016 CAA Championship game between UNCW and Hofstra in Baltimore. 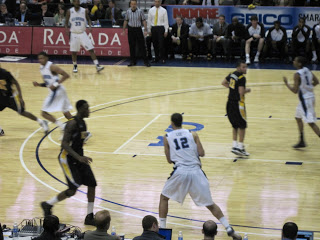 As I look at the matchups, the play in games favor the higher seeds.  #7 James Madison swept #10 Drexel during the regular season, as did #8 Hofstra against #9 Delaware.    If both of those games go to form, which they should, JMU will play #2 CofC and Hofstra will play UNCW in the second round.  CofC swept JMU, though the game at Harrisonburg was decided by only two points.  Meanwhile, the Seahawks swept the Pride, but both were close games throughout, with UNCW winning both by single digits.

I think the best chance for an upset is in the quarterfinals where #3 Towson split the regular season series with #6 Northeastern and John Davis, who will be missing the CAA tournament due to a truly sad incident while visiting his family in Philadelphia, played in both those games.   The most entertaining matchup will be #5 Elon vs. #4 William and Mary, as both teams can put up points (William and Mary is second in CAA in scoring offense at 81.7 points per game, while Elon is fourth at 75.4 points per game).


Honestly, I think UNCW has a very hard road to repeating as champion.   They will likely get Hofstra in the quarterfinal round, which is a rematch of the 2016 CAA Tournament Championship, won by UNCW in overtime.  UNCW won both games this season, but both were close games as UNCW won each game by single digits,  In their 84-76 home win, UNCW was only up by three, 75-72 with less than a minute left before C.J. Bryce hit a three pointer to put the game away.   In UNCW's road win over Hofstra, the Seahawks were only up one point, 77-76 with forty two seconds left before scoring the final six points in an 83-76 win. 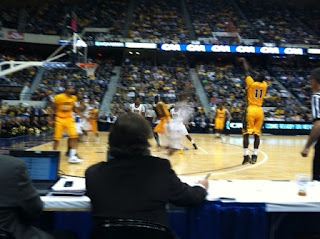 So here are my predictions.  In the Pillow Fight play in games on Friday, JMU takes down Drexel, Hofstra defeats Delaware.   In the Quarterfinals on Saturday, the afternoon session will see two exciting high scoring games.  UNCW barely holds off Hofstra, though I would not be surprised if Hofstra won that game.  In the other afternoon session quarterfinal, Elon squeaks by William and Mary.   In the evening session quarterfinals, College of Charleston handles James Madison, while Northeastern pulls off the upset against Towson. 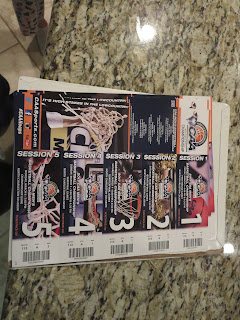 In the semifinals, UNCW downs Elon in another high scoring game while College of Charleston ends Northeastern's run in the other semifinal.  In the final, I like College of Charleston, because a) they play excellent defense and b) the Cougars do not turn the ball over, which is what UNCW predicates their play on to win games, which they have done so well this season.  But the Cougars keep the mistakes at a minimum and CofC wins in a relatively low scoring affair in the high sixties, low seventies.

No matter what happens, it should be a lot of fun. It will be my tenth CAA Tournament.  My color analyst, aka my older son Matthew, my good friend Tieff and I will be in Section 113, Row A, seats 1-3.  Come visit us starting tomorrow night at 6:00 PM as Hofstra takes on Delaware.

CAAHoops - Lovely to see you again, my friend.
Posted by Unknown at 2:13 PM