A Strong Second Half Surge Propels Hofstra Over Towson 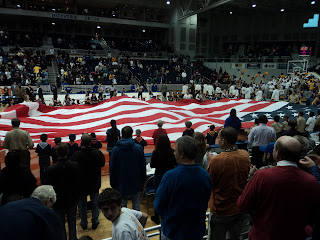 The game started with a nice touch on the National Anthem as the Hofstra Dance Team, Hofstra Cheerleaders and the Boy Scouts unfurled a large American flag before the anthem started.  The cherry on top was a nice rendition of the national anthem. 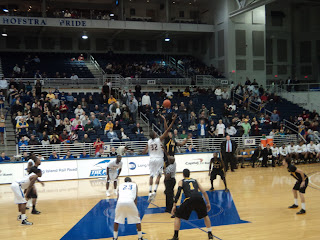 Then it was onto tipoff and the game itself.  The Tigers were looking for their first road win after sneaking by Western Michigan at home.  Meanwhile, the Pride were coming off an impressive ten point win on the road over Rider and looking for their third straight win.

Hofstra continued early on their solid defensive work from their win over the Broncs and held Towson to just two points in five minutes, while holding a 7-2 lead. The Pride were winning 12-7 when the Tigers found their offensive rythym and scored the next eight points as Isaiah Philmore scored the last four points in that run to put the Towson up 15-12 with 10:36 left in the first half.  The teams would then exchange the lead several times over the next five minutes. 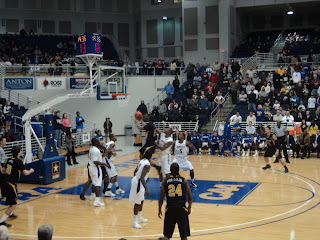 But Rashawn Polk's second three of the night, followed by a Philmore three point play put the Tigers up seven, 30-23 with 4:08 left.  The Pride would score six straight to cut the lead to one.  But Towson responded with the final four points of the half, including Brandon Dupree's putback of a Troy Franklin airball to put the Tigers up five, 34-29 at the half..

Towson shot 52 percent from the field in the first half while Hofstra only shot 34 percent, including 2 of 11 from beyond the arc. Philmore (13 points) and Polk (10 points) both scored in double figures. Yet the Pride stayed in the game due to ten more field goal attempts, a result of ten offensive rebounds to the Tigers' five in the first half.  Hofstra's bigs had foul trouble though. Greg Washington had as many fouls, three, as blocks.  Stephen Nwaukoni had two fouls in four minutes.  As a result, coach Mo Cassara used a smaller lineup for a period of time that consisted of Charles Jenkins, Shemiye McLendon, Mike Moore, Dwan McMillan and David Imes as the lone big. 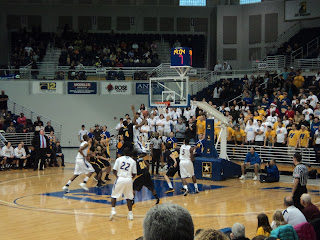 Perhaps realizing that he only had seven points in the first half,  Jenkins was truly "Charles in Charge" to start the second half.  Jenkins scored the first five points of the second half and the first seven Hofstra points as the Pride tied Towson at 36 with 17:27 left in the game.  The teams would go back and forth for a while.  The Tigers would take a lead, then the Pride would tie it.  Hofstra would finally take the lead, 48-46 on two free throws, from who else, Jenkins with 11:44 left.

Hofstra would extend the lead to four but Towson came back as Troy Franklin, who scored 10 points in the second half, buried a three to tie the game at 52 with 8:32 left.  Again, the Pride and the Tigers traded baskets.  A Jenkins three put the Pride up three, but Polk hit his third three of the game to tie it up.  After Dwan McMillan hit a layup, Josh Brown matched it with his own layup and the game was tied at 57 with 6:34 left. 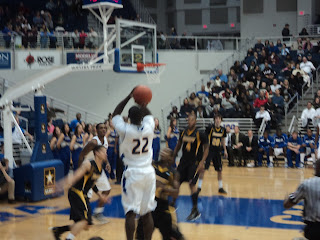 Then came the turning point of the game. With 6:19 left, Imes drove the lane and was fouled as he put up the shot.  The ball dropped neatly into the basket.  Imes would hit a free throw to put the Pride up 60-57.  Brandon Dupree would miss two free throws in part due to the ingenious Hofstra crowd chanting loudly "Look at Him" while pointing to one of the fans right behind the basket in what seemed to be a Ralph Cramden bus driver fat suit.  I kid you not.

From there, the run was on.  Imes hit a jumper to put the Pride up five.  A McMillan layup put them up seven.  Two Moore free throws made it nine.  In the span of not even three minutes, the score was 66-57 and the Tigers never recovered. 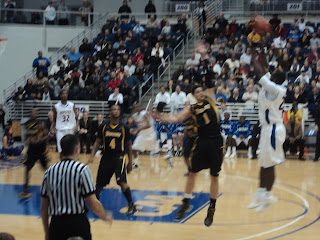 The final dagger to Towson is pictured to your left.  Jenkins nailed another three, his fourth of the game, to put Hofstra up thirteen, 71-58 with 2:15 left.  After four Tiger free throws cut it to nine, Mike Moore ended the scoring burying another three and Hofstra had the win 74-62. 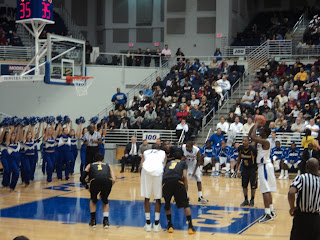 Meanwhile, Hofstra shot 52 percent in the second half including a scorching 6 of 9 from beyond the arc. As usual, Jenkins saved his best work for the last 20 minutes, scoring 19 of his game high 26 in the second half, including 3 of 3 and 4 of 4 overall from beyond the arc.  Jenkins is now averaging 22 points per game while shooting 57 percent from the field on the season.  Mike Moore had 15 points for the Pride, while David Imes had a double double, 11 points and 10 rebounds.   Finally Dwan McMillan had 10 points for the Pride.

The two most impressive stats in the game though had to be that a) Hofstra had one, yes one turnover in the second half only and six for the game.  The Pride also dished out sixteen assists while forcing sixteen Tiger turnovers.  And b) Hofstra shot a perfect 12 of 12 from the line for the game, which was one less free throw than Towson had, though the Tigers had ten more attempts.  After giving up 107 points to North Carolina, it was the fifth consecutive game Hofstra held their opponent to 63 points or less.