Hofstra Advances To CAA Semifinals By Knocking off William and Mary 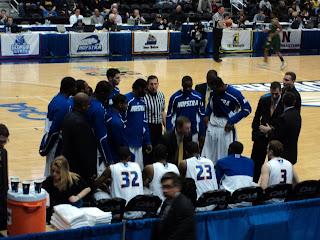 Since the CAA went to twelve teams in the 2005-06 season, this was the third time Hofstra had a bye in the first round.  And it was also the third time the Pride was the third seed, which meant they played the last game on Saturday night.  As much as I love watching basketball, when your team is playing its first game as the eighth game on the second day of the CAA Tournament, you get nervous and a little impatient.  I was chomping at the bit waiting for Hofstra's first game.

After watching the other three top seeds hold serve in one fashion or another, Hofstra fans like me were prepared for the last game of the CAA Quarterfinals against #11 seed William and Mary last night.  The Pride faithful had to be concerned as several us had watched the Tribe played a spirited game in knocking off  #6 James Madison on Friday night.  Quinn McDowell, who scored 28 points in his last game against Hofstra, scored a tournament record 35 points vs. the Dukes.  And also there were the two close games Hofstra played against W&M, both wins.  The second win was of course the classic comeback against the Tribe that cemented Charles Jenkins legend in Hofstra basketball lore. 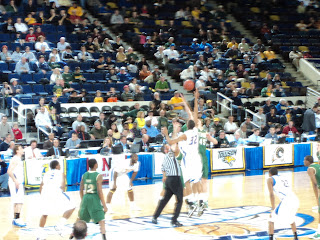 So the question was could Hofstra sweep William and Mary or would they fall victim to the old adage that you can't beat a team three times in a season? Then there was McDowell, who perhaps might be the hottest player in the CAA going into the game.  Then throw in a terrific game manager of a coach in Tony Shaver, and you had to be nervous.

Finally, a little after 8:30 PM, the game started and William and Mary picked up right where they left off the night before.  The Tribe jumped out to a 9-0 lead not even four minutes into the game.  Early on, Hofstra looked out of sync, settling for jumpers and Charles Jenkins missed two free throws to boot.  Meanwhile, W&M had worked it inside for layups by Marcus Kitts and Kendrix Brown.  And of course there was a McDowell three. 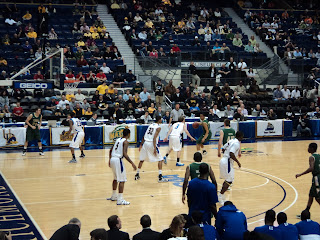 But the Pride found their stride and scored the next eleven points.  Jenkins hit a layup, then assisted on a three pointer by Brad Kelleher.  Six more points later and Hofstra was up 11-9 with 13 minutes left.   The teams would struggle to score for the next few minutes and the game would be tied at 15 with seven and a half minutes left in the first half.

But again, W&M would go on another run.  The Tribe would outscore the Pride 8-2 as Brandon Britt and McDowell contributed with two threes and W&M was up 23-17 with four minutes left.  But the Pride would rally with their own 8-2 run as Mike Moore's jumper tied the game at 25.   Two Marcus Kitts free throws on what seemed to be a phantom foul would end the half with William and Mary up 27-25. 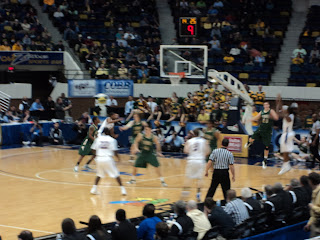 If you were one of the many Hofstra students that made the trip from Hempstead down to Richmond, you had to be happy that your team was only down two points at the half, despite Charles Jenkins only having five points in the first 20 minutes.  You knew The Man would have one of his patented second half runs.  It was only a matter of time.

The second half started with the Mary maintaining a small lead, 32-29 barely three minutes into the second half.  Then Hofstra started taking over with a balanced attack. Moore buried a three to tie the game at 32.  Then Jenkins hit a layup to put Hofstra up for good 34-32.   Jenkins, Kelleher and Moore would combine for another eleven points and the Pride lead swelled to 45-36. 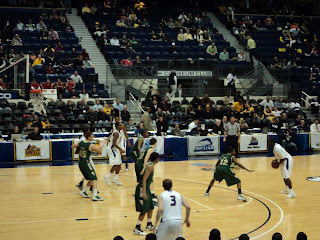 W&M would briefly cut the lead to six, 47-41 with 10:15 left.  Then Hofstra used suffocating defense to force three William and Mary turnovers to ignite a 15-0 run over the next four minutes.  Jenkins three pointer started the run and two Jenkins free throws ended the run.  The Pride was up 62-41 with six minutes left and the Tribe was exhausted, having spent a lot of their energy beating JMU the night before.   Now Hofstra had pressured them to the point of expiration.

After scoring a CAA Tournmament record 35 points vs. James Madison, McDowell was hounded by Hofstra all night, whether it was David Imes, Moore, Yves Jules or Jenkins guarding him.  He was only 2 of 6 from the field.  Also, after shooting 10 of 11 free throws Friday night, McDowell didn't have a single free throw attempt against the Pride.   With their best scorer held to six points, the Tribe were done.  Hofstra would win their third game against W&M this season, this time winning easily 72-56. 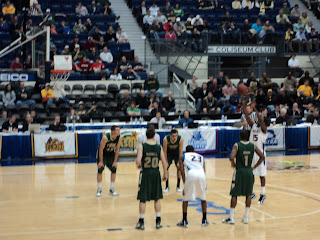 Having seen Hofstra all season, I honestly think it might have been their best defensive performance, especially the last 20 minutes.  The Pride forced fifteen Tribe turnovers while only committing two turnovers themselves.  Hofstra also had great balance.  Jenkins had 20 points of course, but Kelleher added 12, Moore 11 and Imes had 10 points and 8 rebounds. Shemiye McLendon again was a great spark off the bench with 9 points.  The Pride are now 19-1 when three or more players score in double figures.  Hofstra was also 19 of 22 from the line.   Finally, Coach Mo Cassara's game plan to take McDowell out of the game worked perfectly.

As the team celebrated with their fans after the game, the Pride know they have a quick turnaround later today with #2 seed Old Dominion.  If Hofstra can continue the suffocating defense they had vs. the Tribe and limit the Monarchs on the offensive glass like they did vs W&M (only four offensive boards), then they have an excellent chance to move to the finals.

This time, I won't have to wait nearly two days to see this next game.
Posted by Unknown at 1:32 AM