BBQ and BBall in Newark, as Hofstra Defeats Delaware 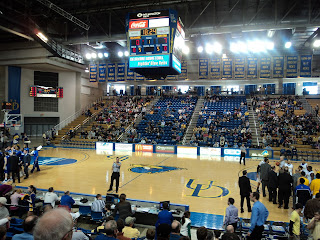 My son Jonathan has been getting up early all week.  As in between 4:30 - 5:30A.M. early.   Now for the first five days of the week, I was not too thrilled.  But yesterday, when Jonathan woke up at 5:30 AM, I didn't mind.   The first reason was that I needed to put the finishing touches on my "Iona Squared at the U" article.  The second reason, I was eager to get on the road to head to Delaware for some barbecue and basketball as Hofstra took on the University of Delaware Saturday afternoon.

I had all the giddiness of a school boy about to go on a date with his grade school crush.  That's because I have always loved the road trip to Delaware.  First, road trips with my dear friend and partner in road trip crime Tony Terentieff  (otherwise known on this blog as Tieff) are always fun.  Second, the Bob Carpenter Center, aka The BOB, is a great place to see a basketball game.   Finally, the BOB has the best concessions area in the CAA, a barbecue stand with side dishes! 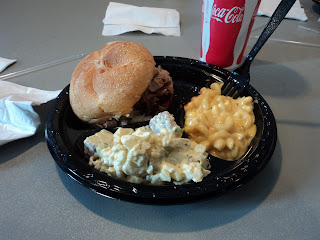 Over the years, we have made many road trips to CAA games, including Drexel, Delaware, Towson and of course Richmond for the CAA Tournament.  All those trips have in common the drive from the Southern State to the Belt Parkway to the NJ Turnpike to I-95.  The key is getting onto the Verrazano.   Once on there, we rarely have encountered a delay.  The problem is usually the Belt Parkway.

Yesterday was no exception.  As we approached Exit 13 on the Belt, we ran into a huge traffic jam.  We wondered at first if it was an accident.   I had the radio on WCBS 880 AM and WINS 1010 AM all throughout the drive.  There was no mention of delays on the Belt Parkway.  Yet here we were in bumper to bumper crawl behind a large Ford Econoline that had on the back "CHURCH VAN".  So we couldn't see really ahead of us.  My patience was wearing thin as I had nowhere to go while my stomach grumbled for the barbecue it craved. 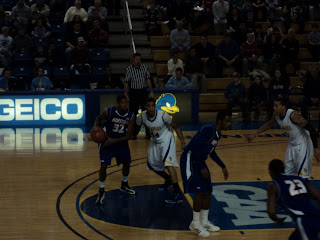 I had my navigation system with me and our ETA that was originally 12:50 starting climbing.  12:55. 1:00. 1:10.   Finally Tieff wondered if it was a moving pothole repair crew.   As Tieff looked down at the road, he saw a freshly tar covered spot and showed me the evidence.   A short time later we finally made our way up to the pothole repair crew.  They blocked TWO lanes of the Belt and all the traffic was merging to one lane.  Unbelievable.   It ended up delaying us over THIRTY minutes.

Needless to say I was fuming.  How dare the New York CITY DOT delay me from my barbecue roast beef sandwich!  I decided to channel my inner Tony Stewart.  I made up about ten minutes of time as we flew down the New Jersey Turnpike to I-95 and then to the University of Delaware exit.   We got to the Bob Carpenter Center around 1:20 PM.   After waiting in line, we parked behind the football stadium and walked to Will Call, where we had to pickup our online purchased tickets. 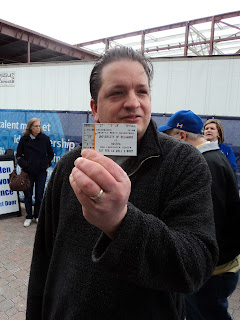 As we waited on line at Will Call, I ran into my friend, Mr. Defiantly Dutch, Jerry Beach.  Jerry immediately showed me his ticket for the game.  Hofstra was spelled "Hostra".   That should have warned me for what was about to happen next.

Before I left the house, I wisely forwarded my Ticketmaster ticket receipt email message to my gmail account, so I would have that as my proof that I had purchased tickets.   So after her last pronouncement, I pulled out my IPod and showed her that I have this receipt email from Ticketmaster that I had purchased the tickets.   Immediately she said "Oh, that's the Ticketmaster Will Call. "  She quickly looked, found the tickets, gave them to me and said "Here are your tickets."

It was the most completely dumbfounding experience I had at a ticket window.  I showed the woman my ID.  All she had to do was look to see if I was in either the regular will call tickets or the Ticketmaster Will Call.  The sign above the outside ticket booth says "Will Call".  It doesn't differentiate between Ticketmaster and whatever other team or player Will Call tickets.   First, the NYC DOT, now a completely moronic experience at the Will Call window.   I needed barbecue stat. 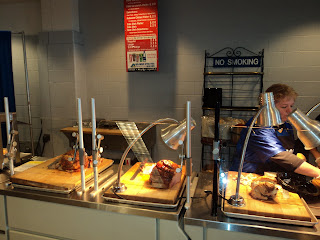 We made our way into the BOB, going up the stairs to the main entry way for the Acierno Arena. And as we walked in, there was salvation.  The Barbecue Concession Stand.   Delicious roast pork, roast turkey and roast beef.   And there was no line.  Hallelujah!   Tieff and I quickly made our orders.  Roast Turkey sandwich platter for Tieff.  Roast  Beef sandwich platter for me.  And it was "Buy One Platter, Get the Second for Half Price".  How the hell can you beat that!

Tieff bought lunch since I drove my car to the game and we sat down at the large roundtables next to the stand.  As  you can see from the picture next to the third paragraph, there was the roast beef sandwich with barbecue sauce, a generous helping of potato salad (the old fashioned German kind) and a generous helping of yummy mac and cheese.  All I can say was that as usual, it was truly delicious.  If you have never had the barbecue at a Delaware basketball game, well you are really missing out. 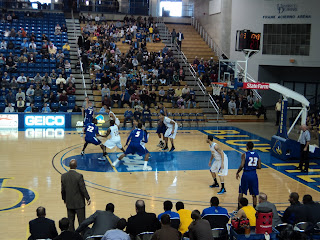 We got to our seats in Section 18, Row L a couple of minutes after tipoff.   It was a decent size crowd (listed attendance was 3,503),  and a couple of Pride fans I know made the trip out (probably for the BBQ too).  Hofstra was already ahead 2-0 and they were about to extend the lead to 7-0.

The lead was extended to 22-10 on a Jenkins layup with about eight and a half minutes left in the first half.  Jenkins had seven points but it was Greg Washington who was the most impressive.  He hit a couple of his usual jumpers but on one play he took the ball at the top of the key, drove the lane and hit a layup.  Tieff and I were stunned.  Just stunned.  In four years we had never seen Washington do that.  And when you have your 6 foot 10 center making plays like that, it only helps expand the offense. 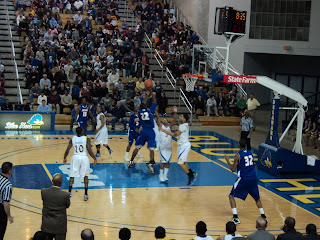 Another interesting development was that in the first half, Hofstra was getting rebounds, especially one David Imes.   Imes had nine rebounds, eight on the defensive end in the first half as Hofstra outrebounded Delaware 21-17.  When the Pride is limiting teams to one and done possessions, it becomes even more difficult to beat the team with best player in the CAA. 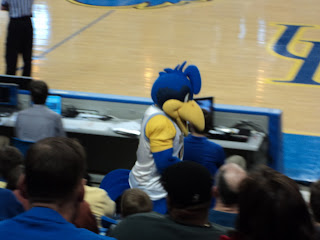 With the Blue Hen trying to rally the fans in the stands, the start of the second half saw Delaware starting to hit their shots while Hofstra looked stagnant on offense.  The Blue Hens outscored the Pride 8-2 to cut the lead to 33-28 with 16:25 left.   But Hofstra would respond with a 12-2 run as Mike Moore scored seven of those points.

The score was 43-30 with 13:44 left.  But Delaware has played tough at home, defeating ODU and taking VCU to overtime.  So it was not surprising that the Blue Hens made another run, outscoring the Pride 12-4 over the next six minutes.  Delaware was back within five, 47-42 with seven and half minutes left. 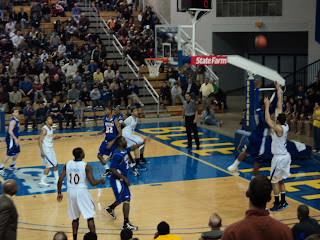 But as with the start of the second half, once Delaware got close, Hofstra would have a response.  The Pride would score the next six points.  Four free throws by Washington and Jenkins and a jumper by Moore put Hofstra up 53-42 with 5:42 left.  It looked as if the Pride had perhaps finally put out the fight in the Fightin Blue Hens.

But there's was still a few punches left in Delaware.  The Blue Hens would outscore the Pride 11-2 over the next three minutes.  A couple of three point bombs by Devon Saddler and Jawan Carter made the score 55-53.  The home fans at Acierno Arena were finally into the game cheering their team on.  Hofstra called timeout with 2:45 left to setup their offense. 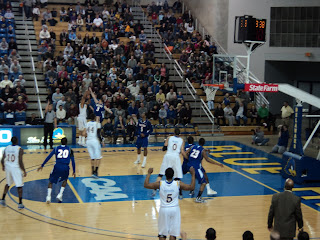 With the home crowd loudly chanting defense,  Hofstra got the ball into Jenkins' hands, but he missed a three pointer.  However, Mike Moore got a huge offensive rebound and again Coach Mo Cassara called timeout with about two minutes left.  Once again, Jenkins got the ball and this time he hit the short jumper to put Hofstra up 57-53 with a little more than a minute and a half left.

But Delaware responded again, as Saddler, who had 25 points on the day, hit a short jumper with 47 seconds left to again cut the lead to two, 57-55 with 48 seconds left.   Coach Monte Ross called timeout to setup the Blue Hens defense.  They knew who would get the ball for Hofstra. 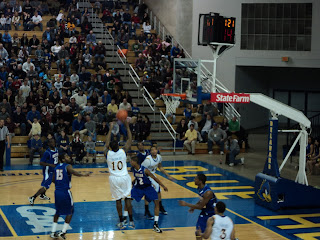 The Pride got the ball in the hands of their man Jenkins.  He wound the shot clock down and went on his patented drive to the basket.  As he put up his shot, he was fouled by Jamelle Hagins.  With a raucous crowd screaming for him to miss, Jenkins calmly hit two free throws to put the Pride up 59-55 with 16 seconds left.

Delaware went back to their man Saddler.  But as Saddler went to put up a shot, Jenkins came over to help and blocked the shot.  Jenkins picked up the loose ball and immediately was fouled.  Two more free throws and the Pride went up 61-55 with nine seconds left.   Yves Jules forced Saddler to dribble up the court to take time off the clock.  Jules backed off Saddler, who sank another three pointer right at the buzzer.  The last three points didn't matter and only made the final score 61-58.  Another Hofstra road win. 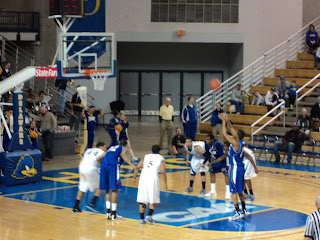 The Pride were lead by of course Jenkins who had 23 points, 3 assists and that all important one block.  Moore had 17 points and Washington added 11 points.  Hofstra is now 15-1 when they have three or more players score in double digits.  Imes added three rebounds to his first half total for 12 rebounds in total.  Saddler was the only Blue Hen in double figures with his 25 points.  Jawan Carter, who came into the game averaging 15 points, only scored 9 points.

With the win, Hofstra is now 11-4 in the CAA, still tied with ODU for third place after the Monarchs trounced VCU at the Siegel Center on ESPN2.  The Pride are still up two games on Drexel, who barely squeaked by William and Mary at home 54-52, with three games left to play in conference.  Drexel is the only team that can deny Hofstra one of the four bye spots for the CAA Tournament after James Madison lost at George Mason.   Delaware is now 6-9 in conference in a three way tie for seventh in the CAA with UNC-Wilmington and Georgia State. 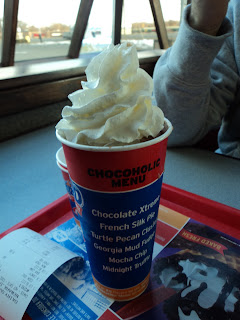 Despite the wonderful New York City Department of Transportation (dripping sarcasm) and a moronic Will Call system, it was still a great road trip.   And there was only way to celebrate Hofstra's sixth road win in the CAA this season.  A large Chocolate Truffle Blizzard at a Dairy Queen a mile away from the arena.  Blizzards always taste great.  But they taste even better after your team wins a big road game.

There are still at least two road trips left for me.  One is the road trip this coming Friday to Dayton for the Hofstra vs. Wright State BracketBuster.  Then in less than three weeks, it's the annual trek to Richmond for the CAA Tournament.    Two more times to have fun watching basketball.   And definitely two more times to have Dairy Queen Blizzards.
Posted by Unknown at 12:34 PM