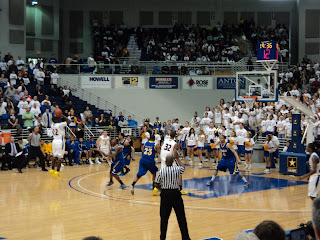 As you get older, the years go by much quicker.  It seemed like yesterday I was up in Worcester, Massachusetts watching a freshman wearing #22, and built like a Miami Hurricane free safety, drive his way to the basket in his first game as a member of the Pride.  November 10, 2007 was one of the very few nights in Charles Jenkins' career that he scored less than ten points (by my count Jenkins scored less than 10 points six times in his career).  But really yesterday was February 26, 2011.  It was Senior Day, where a sold out crowd of 5,050 thanked Jenkins and his senior teammates Greg Washington and Brad Kelleher for all they have done. 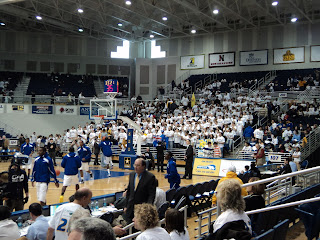 My son Matthew and I walked into the arena about ten minutes to 1:00 PM, more than an hour before game time and forty-fifty minutes before the festivities would start. We each grabbed a free Charles Jenkins T-shirt and headed towards our seats. Already the Lions Den section was mostly full as it has been for a good part of the season.  The Hofstra student faithful wanted to properly send off their seniors.  Numerous cameramen and production people wearing dark blue CAA television sweatshirts were around the announcers table, as the game was the CAA Television game of the week with the always good Scott Graham. 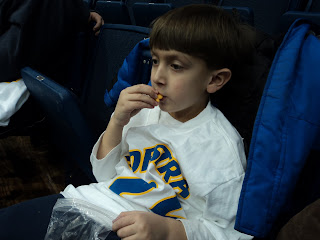 Matthew and I got to our seats, and I noticed the decals with the numbers of 3, 22, and 32 on the court, signaling the numbers of the three seniors, Kelleher, Jenkins and Washington.  As I watched the teams warm up, Matthew quietly ate his goldfish.  A little later my good friend, Mr. Defiantly Dutch, Jerry Beach came by and we chatted about the big day, the fact JMU was winning at VCU and the upcoming CAA Tournament.

The festivities started with a video showing the highlights of the careers of the three seniors.  Then each of the seniors walked on the courts with their families to get their framed jersey and thanks from the University President, Stuart Rabinowitz, AD Jack Hayes and coach Mo Cassara.  First it was Kelleher, with the Lions Den chanting "Aussie Aussie Aussie!" complete with a Australian flag.  Then it was the six foot ten Washington who walked on the court.with the rest of his equally tall family.  Finally, it was Jenkins who walked out with his parents. 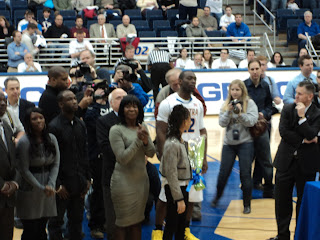 But Jenkins was not just getting a framed jersey on this day.   He was getting more than that.  For the first time ever in Hofstra's athletic history, an active player's number would be retired before their last game.  As Jenkins, his family and a capacity crowd watched, the black sheet was removed from the rafters unveiling Jenkins' #22 banner.  The Mack Center was electric as the Hofstra Lions Den chanted loudly "CHARLES JENK-INS".   It was one of the most special moments ever held at the arena, a fitting tribute to a great player and person. 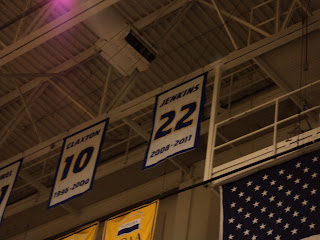 But there was still a game to play against the Fightin Blue Hens.  Seventh place Delaware was looking to finish .500 in conference and had only lost by three in Newark to Hofstra.  And on Senior Day, Delaware senior guard Jawan Carter wanted to celebrate as well in his own way.  Carter would score eleven of Delaware's first nineteen points.  How he scored them was quite interesting.  One three pointer, six free throws after being fouled on two three point FG attempts and a layup.  The score was 19-17 Blue Hens with 9:09 left in the first half. 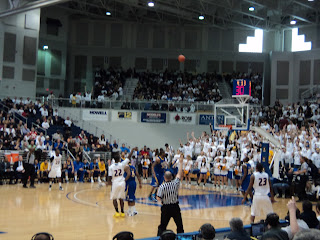 Hofstra was down two halfway through the first half of their Senior Day game and they needed a spark. They just so happened to get that from a freshman, who didn't play at UNCW on Wednesday as a result of a "teaching moment".  Shemiye McLendon came off the bench and hit two jumpers and assisted on a three pointer by Mike Moore.  It was part of a 12-2 Pride run that was capped by a Charles Jenkins three point play.  Hofstra was up 29-21 with 3:57 left in the first half.  The Pride would enter halftime leading 33-26 at the halftime. 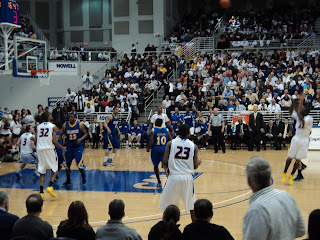 During the first half, Hofstra found out they had at least clinched third place when it was announced over the PA system that JMU had defeated VCU 72-69.  The knowledgeable Lions Den roared in approval.  All that was left was the Pride to get the win and clinch a tie for second place and clinch a tie for their best regular season record in the CAA conference. And their senior trifecta being honored yesterday would lead the way on that.

Hofstra came out in the second half and rode its seniors to a huge run in the first ten and a half minutes.  Jenkins, Kelleher and Washington combined to score nineteen of the Pride's first twenty three points as Hofstra outscored Delaware 23-10 and took a 56-36 lead with 9:27 left in the game.  What was particularly impressive was that after thirty three minutes, the Pride only had four turnovers while dishing out fourteen assists.  The lead swelled to twenty one, 58-37 as Kelleher assisted Washington on a layup. 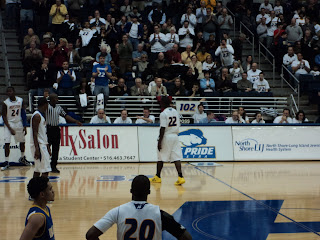 Towards the end of the game with the outcome certainly no longer in doubt, Coach Mo Cassara started taking his seniors out.  With 58.6 seconds left, Cassara took out Jenkins.  The capacity crowd at the Mack all stood up and gave the two time Haggerty Award winner a roaring standing ovation.  Jenkins hugged his teammates and Coach Cassara.  It was a fitting final tribute to Jenkins at the Mack.

The game ended with Hofstra soundly defeating Delaware 79-60.  Hofstra had five players in double figures in scoring, led of course by Jenkins and his 21 points (he also added 4 assists and 4 steals).  Washington had 12 points, 8 rebounds and 4 steals.  Kelleher also had 12 points and 5 assists.  McLendon had 11 points, 5 rebounds and 4 assists.  And Mike Moore had 11 points and 6 rebounds.  The Pride are now 18-1 when three or more Hofstra players are in double figures scoring.  For Delaware, Carter and Devon Saddler combined for 38 points on 11 of 25 shooting.  The rest of the Blue Hens however shot a combined 6 of 23 for 22 points. 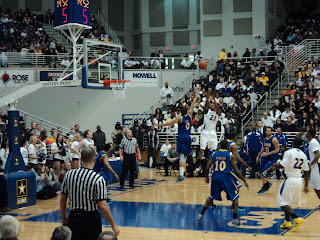 Hofstra now enters the CAA Tournament with a 20-10 record and a 14-4 conference record.  The Pride are the third seed and will face the winner of the #6 James Madison vs #11 William and Mary game.  It's the first time since the 2007 CAA Tournament that Hofstra has a first round bye.  And if you are one of the few, the proud, the readers of this site, you well know that since the CAA expanded to twelve teams in the 2005-06 season, the winner of the CAA Tournament has only come from one of the teams that had a bye in the first round. 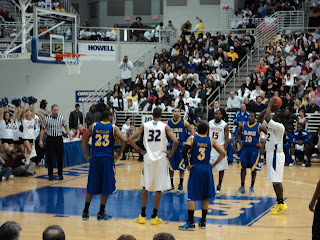 As we started to leave the arena, one of the images I will remember the most about this Senior Day was taking place over at the left hand corner of the Hofstra Lions Den student section.  There Greg Washington, all six foot ten of him, was conducting the Hofstra pep band during their closing fight song.  Tieff, Mal, my son Matthew and I all stopped in amazement at what was definitely a humorous moment.  I didn't get my camera out in time to take a picture, but I will never forget seeing Washington's long arms waving the band on in song.

It was a fitting end to a very unforgettable day.
Posted by Unknown at 11:00 AM