Iona Squared on the U 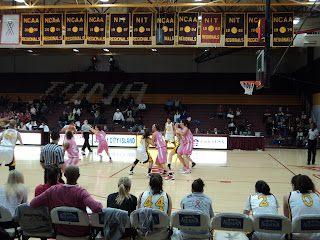 After finishing work yesterday, I got in the car and called my better half to check in.   Chelle knew I was heading out to an all familiar destination, traveling from Long Island up to the Whitestone Bridge to the Hutchinson River Parkway.  It's otherwise known as the trip to New Rochele, home of Iona College.   This time it was for a MAAC doubleheader that was broadcasted nationally on ESPNU.  First it was my friend Tony Bozzella's Iona Lady Gaels vs the #24 ranked team in the nation, the Marist Red Foxes.  Then the nightcap was men's basketball action as the Siena Saints took on the Iona Gaels.

For the Lady Gaels it's been a tough season. A team that had made the WNIT three of the past four seasons struggled out of the gate this season.   At one point, Iona was 5-13.  Then the Lady Gaels won their next four games in conference to even their MAAC record at 5-5 and were 9-13 overall.  Things were looking up for a team that was used to success under Coach Bozzella.  Then in the past week, Iona suffered two heartbreaking losses in a row.  The first was in overtime at home to second place Fairfield.  Then in their next game, Iona lost in double overtime at Rider.  Now the Lady Gaels were trying to regain their footing with the very difficult task of facing the nationally ranked Red Foxes who were 12-0 in conference. 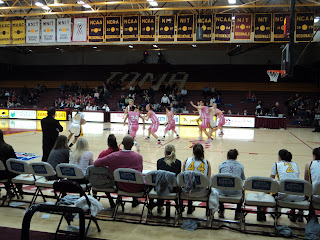 After having to deal with traffic on the Cross Island Expressway, thanks to two minor accidents, I got to the game at halftime.  First it was Breast Cancer Awareness Week.  I made my contribution by purchasing a pink kids' basketball for $5.00.    Then I made my way into the gym.  The Lady Gaels were down 33-24 at halftime.  All things considered to be down only nine to a nationally ranked team at the half is pretty good.   Now the question was, could the Gaels come back in the second half.

Iona did their best on the defensive end to keep themselves in the game.  In the first thirteen minutes of the second half, Marist shot only 4 of 15 from the field.   The problem was the Red Foxes' stifling half court defense was equally effective in keeping the Lady Gaels from getting any closer than eight points.  And when Iona had open looks, they couldn't hit their shots.  During that same thirteen minute span, the Lady Gaels shot 4 of 19 from the field.  But An Anda Ivkovic free throw cut the Marist lead to eight, 43-35 with 8:33 left in the game.

There was a decent sized crowd for the women's game, many of whom had come for the second game.  But even with the deficit at only eight points, the crowd was very dead in the second half.  There was the rare and not very loud "Let's go Marist!" chant by the fans that traveled down from Poughkeepsie to see their #24 ranked Red Foxes.   Part of the problem was that the game was such a low scoring defensive affair that at times was tough to watch.  Still, you expected the home crowd to rally behind their Lady Gaels, but it never really did. 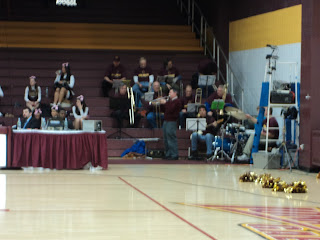 Still for me, it was a fun atmosphere.   Both teams were playing hard, especially Iona's Kristina Ford who had a double double with 15 points and 11 rebounds.  You also had the Iona Pep Band playing as well.  The always solid group was playing it's usual repetoire of Stevie Wonder, Led Zeppelin, Edgar Winter's "Frankenstein", the James Bond theme, and my personal favorite of theirs, Steely Dan's "Peg".

Down eight, Iona had several chances to cut the lead to at least six, including one possession where they had two offensive rebounds.  But they just couldn't put the ball in the basket.  The Red Foxes eventually would win 56-45.  The stats showed that it was a low scoring affair as Iona shot 24 percent from the field while Marist only shot 39 percent.  The Lady Gaels outrebounded the Red Foxes 46-32 including 20-7 on the offensive end.  But Iona basically couldn't capitalize on the second chance opportunities they had.  Marist is now 13-0 in the MAAC while Iona is 5-8. 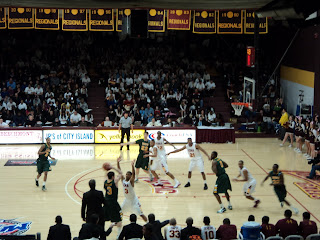 Now it was onto the men's game.   This featured the three time defending MAAC champion Siena Saints vs. an Iona Gaels team in their first season under coach Tim Cluess.   It has been a struggle for the Saints this season.  A team that had a record of 77-26 in its previous three seasons was 10-13 on the season, 7-6 in conference.  Meanwhile, entering this season the Gaels were considered a team on the rise in the MAAC.  And they started out like it with a 13-6 record including 7-1 in the MAAC.  But Iona then lost four straight in conference before beating Manhattan earlier in the week.  Both teams needed a win badly.

It was WhiteOut Night at Iona as fans were encouraged to wear white for the nationally televised games, and a local Honda dealer gave out white T-shirts for the first 1000 in attendance.  Thus the crowd filled in during the break between the games. By the start of the game, there was a capacity crowd in the gym. 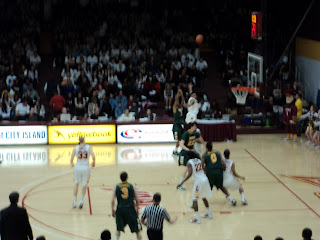 As I sat with Coach Bozzella and his family in the upper rows of the gym, Iona came out strong from the start.  The Gaels' best player is forward Michael Glover.  And now whenever Glover scores at home, they play over the PA System "I AM OPTIMUS PRIME!" And Optimus Prime Glover dunked to give Iona a 19-12 lead.  A Kyle Smyth three extended the lead to 24-14 with 7:25 left.

But the Saints still have two players left from those Saints teams that made three straight NCAA Tournaments, seniors Clarence Jackson and Ryan Rossiter.  And two players with championship hearts led Siena back into the game.  During an 18-8 run over a six minute span, Jackson would hit two threes and a layup, while Rossiter chipped in with six points of his own to tie the game at 32 with 1:29 left in the half.  But Jermel Jenkins fed Alejo Rodriguez for a layup.  It was already the 13th assist for Iona who went into halftime up  34-32. 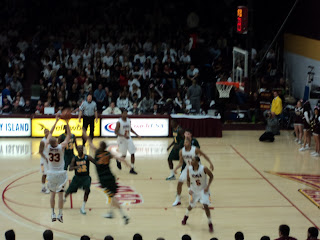 The second half saw Siena come out and take the lead for the first time in the game on another Jackson three pointer.   Iona would briefly take the lead, but again Jackson would hit another three pointer to tie the game at 40 all with 15:24 left in the game.  The fans were now squarely into the action as the students started a loud "I - O - N - A, IONA GAELS!" chant.

I had wondered why a Siena team that was coming off three straight NCAA Tournaments and that still had Rossiter and Jackson was struggling at 10-12 overall.  Then I found why out over the next ten minutes of the game.  Over that span, Siena committed six turnovers, a lot of them on simply careless passes.   During that time, the Gaels outscored the saints 18-5.  What had been a tie game was now a thirteen point Iona lead, 58-45.   You simply can't win when giving the leading scoring offense in the MAAC additional offensive opportunities.  And the Gaels, who average 78.6 points per game made the Saints pay. 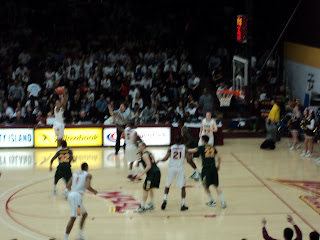 The Hynes Center was now rocking after the Gaels run which included three Jermel Jenkins three pointers.  And of course there was the aforementioned 'I AM OPTIMUS PRIME" after another Glover basket.    We stayed until the three minute TV timeout.  By that time, Iona was up 60-50 with three minutes left and Glover was fouled before the timeout.  He would hit the two free throws and though Siena made a late spurt, the Gaels held off the Saints for a 69-65 win.

Though Jackson had 14 points and Rossiter added 13, it was sophomore Jonathan Breeden who let Siena in scoring with 24 points on 10 of 14 shooting.  Glover would lead the Gaels with 22 points while Jenkins added 19.  The Gaels had 18 assists on the night, which was above their average of 17.2 which is 11th in the country.  It's really impressive how Tim Cluess' team passes the ball around.

I said goodbye to my friend Coach Bozzella, his lovely wife Maria and his great kids Samantha and Joey and headed back to my car for the trip back home to Long Island.  Another fun Friday night in New Rochelle.  But it was time to get home for the next day was my annual road trip to Delaware to see Hofstra take on the Fightin Blue Hens.

Another day, another live basketball game.  Nothing wrong with that.
Posted by Unknown at 7:14 AM