Jenkins Gets His Proper Due Today 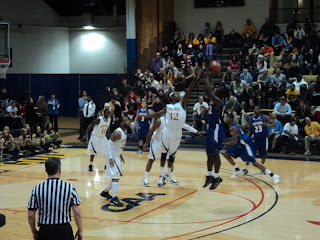 When Hofstra announced a few days ago that Charles Jenkins' jersey was being retired BEFORE he played his last home game for the Pride, I thought it was the ultimate honor for the ultimate player.  Having witnessed so many of his games over his four seasons, I can honestly say I have never seen a better player in a Hofstra uniform than Jenkins.  And yes, I saw many of Speedy Claxton's games.

More importantly from all accounts, there has never been a better person than Charles Jenkins.  He regularly attends other sporting events on campus to support his fellow athletes and he has been humble in the face of  increasing attention, including a hilarious Chuck Norris influenced Facebook group called Charles Jenkins Facts.   I have met him a couple of times myself and he is genuinely a nice person. 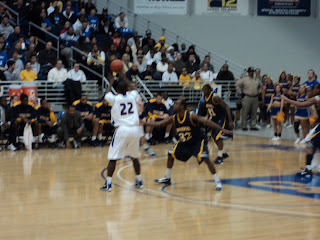 So later that day, I came up with the idea to rename my blog on Saturday for one day in honor of Charles Jenkins.  I also ran the idea by Jerry Beach to see if he would join in and rename his blog in honor of Jenkins as well.  He agreed.  So "The Hofstra Bloggers", as Kyle Whelliston calls us, have both renamed their blogs for today, Saturday, February 26 for "The Man".

I first saw Jenkins' first game for the Pride  in November of 2007 in Worcester, Massachusetts.   Hofstra was facing Holy Cross in a return matchup from their BracketBuster game from February 2007, which the Pride won 65-64 at the Mack Center.  This time on the Crusaders home court, Holy Cross easily won 61-47 as Hofstra struggled with their new lineup.  Jenkins would only score five points in that game but showed "a propensity to drive to the basket strong but missed several layups".  Those layups started falling in the next game against Manhattan and kept falling thereafter that first season. 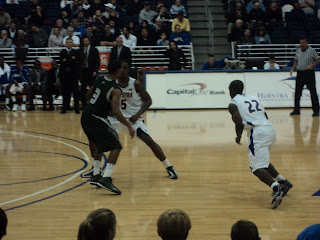 The 2007-08 season was also Antoine Agudio's senior season.  So it was quite ironic that Agudio, the former all time Hofstra leading scorer and Jenkins, the man who broke his record, played together that one season.   Despite having what would eventually become two iconic scorers, the Pride struggled that season going 12-18 and losing in the first round of the CAA Tournament to Towson.

Still, Jenkins would be named the CAA Rookie of the Year that season. Jenkins averaged 15 points per game that season while shooting 47 percent from the field and 78 percent from the line and added 4.6 rebounds per game.  I got to see Jenkins' best game that season in New Rochelle in February 2008.  Hofstra would defeat Iona on Bracketbuster Saturday 81-63.  Jenkins had a dominant day with a double double.  He scored 28 points on 11 of 20 shooting, added 10 rebounds and 4 assists. 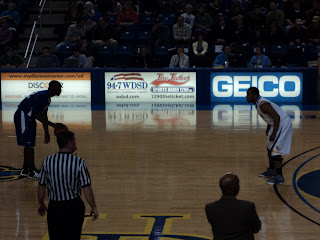 Of course, Jenkins would only get better his sophomore season.  Though his field goal percentage went down to 40 percent, he averaged 19.7 points per game.  His assists shot up to 4.3 per game, more than double from the season before while his rebounds were at 4.8 per game.   The Pride improved to a 21-11 record and 10-8 in conference before losing to ODU in the quarterfinals of the CAA Tournament.

Jenkins would be named CAA First Team and won the Haggerty Award for being the best player in the NYC metro area.  My favorite Jenkins game from that season was a double overtime classic on February 18, 2009 at home vs. James Madison, one of a series of overtime gems between the two teams.  In that game Jenkins nearly had a triple double with 32 points, 13 assists and 7 rebounds.  He also added four steals while shooting 11 of 16 from the field and 10 of 12 from the line as the Pride outlasted the Dukes 99-96.

Last season, again Jenkins improved as a junior.  He would increase his points per game total to 20.9 ppg.  He averaged nearly four assists per game while averaging 4.5 rebounds per game.  Where he also improved was his three point field goal percentage, jumping from 31 percent  to 41 percent from beyond the arc.  His overall field goal percentage improved to 44 percent.  Jenkins would be named the CAA Player of the Year and again would be named the Haggerty Award winner for the second year in a row. 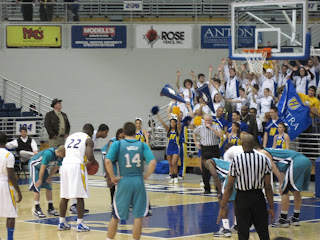 The game that Jenkins stood out for me in the 2009-10 season was of course the game against UNC Wilmington at the Mack Center on January 27, 2010.  In the 93-54 win over the Seahawks, Jenkins would have an EIGHT POINT play.  It was the most surreal thing I had ever seen in a game.   Read the aforementioned link for my recap of the play, because I can't do it justice again.   Jenkins had 24 points on that night on a neat 7 of 9 shooting and 9 of 10 from the line. 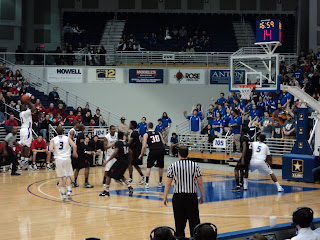 Jenkins has also stepped up his point guard abilities.  He averages 4.8 assists per game, making him only one of two players who lead his conference in both scoring and assists.  Jenkins has also improved his three point shooting to 42 percent from beyond the arc. As you can tell, his all around game has improved each season.

Due to Jenkins unselfish nature, he has got his teammates more involved.   And as a result, the Pride's conference record has dramatically improved this season.  Hofstra is 13-4 in the CAA and 19-10 overall.  The Pride are guaranteed a first round bye in the CAA Tournament and can finish third with a win over Delaware today. 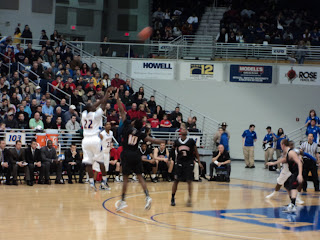 Due to Jenkins' all around game, he has received national exposure from the Sporting News, ESPN, Yahoo Sports, the New York Times etc.   And he is getting a lot of attention from NBA scouts.  Twenty seven NBA scouts saw Jenkins play against Georgia State in Atlanta earlier this month.  And he had one point for each of them, with one left over for David Stern.  Chad Ford currently has him listed as #50 in his Top 100 overall NBA prospects for the upcoming NBA draft.

Jenkins has indelibly left his mark on this season with two classic games.  There was another overtime gem with James Madison on January 24 where Jenkins willed his team to win 92-90.  He had 35 points, 5 assists, 3 blocks, 2 steals, and the final rebound to seal the win.  The Pride had rallied from a 45-30 second half deficit to win in OT.   I vividly remember the ending of the game where Jenkins grabbed the ball underneath the basket after Julius Wells purposely attempted to miss the second free throw.  After the clock ran out, he went to the front row of the student section behind the basket.  There, he was mobbed by his teammates and the Hofstra Lions Den.   It was a fitting end to such an emotional game.

Then when you thought he could not top that at home, he did on February 15 and became a YouTube sensation.  Jenkins would score 28 points in a thrilling 81-78 overtime win over the Tribe.  But it's how he did that which has made him now a legend.   He forced overtime with a three pointer with four seconds left to tie the game at 69.  Then in the overtime, with no time left on the clock, Jenkins buried a 35 footer to win the game for Hofstra.   The moment was even more special for me because it was my 45th birthday and my five year old son attended the game with me.  Matthew is now hooked on basketball thanks to one Charles Jenkins. 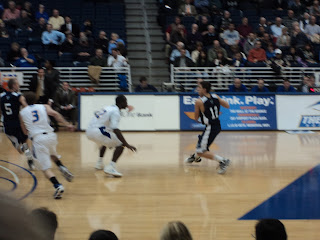 And Jenkins is more about winning than setting personal goals.  After he set the scoring record in a loss to Drexel at the Mack Center, Jenkins could talk about nothing but the fact they lost.   He has also mentioned numerous times that he wants to accomplish what Speedy Claxton accomplished, a NCAA Tournament appearance.  That's why you don't see Jenkins take more than 14 shots a game.  That's why he averages nearly five assists per game.  The Man knows his priorities.

So it is fitting that someone who has been more than just a great basketball player but a great member of the Hofstra community gets his number retired today.   And it's also fitting that someone who has given me four seasons of so many memories, and given my older son a memory he will never forget, should get what I hope he considers another honor.  For the only time ever, I will name my blog for this one day after a great player and an even better human being.

Charles Jenkins is the College Hardwood.  Congrats Charles.
Posted by Unknown at 12:00 AM