Doubleheader Day in New Rochelle (Recap of Loyola-Md vs. Iona) 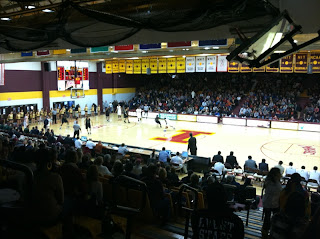 Yesterday, I brought both of my kids with me to the doubleheader since my wife works on Sundays.  Matthew, my older son, loves basketball.  He was excited about the prospect of watching two games.  Jonathan on the other hand did not fare as well.  The women's game he was fine.  But since the gym was so warm yesterday, he needed some hugs in the second game.  Towards the end, he fell asleep on the seat. 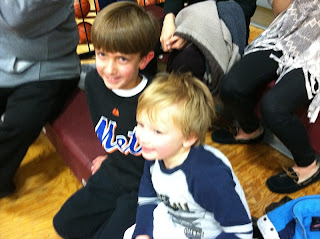 In the women's game, Iona rallied from a first half 22-11 deficit and held on to defeat Manhattan 65-60.  It was the Gaels fourth win in their last five games and gave them a 4-2 record in conference.  What makes that even more impressive is that Iona has done all this without their best player, all conference forward Kristina Ford, who has been out with a knee injury.  It's just another example that All of Us is greater than Each of Us.

In the second game, you had two men's teams whose last game involved major second half comebacks.  In Iona's case, they were outscored by twenty points in the last seven minutes and forty eight seconds of their loss to Manhattan on Thursday night.  Meanwhile, Loyola-Maryland rallied from fifteen points back and defeated Fairfield on Friday night.  Having been in attendance for both of those games, I was wondering what these two teams would do for an encore. 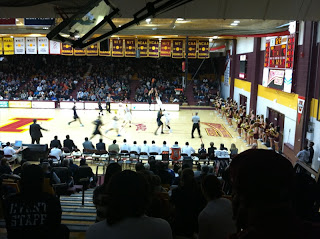 The start of the game saw one team building on it's momentum from their win Friday night, Loyola, while the other team was hungover from their stunning loss on Thursday, Iona.  The Greyhounds came out with a lot of confidence and stormed off to a 22-15 lead as they hit five shots from beyond the arc.  Robert Olson, the subject of a lot of Coach Jimmy Patsos' tongue lashings on Friday night, hit two of those five three pointers.

Momo Jones would get Iona back in the game.  He scored seven straight points and nine of the Gaels' eleven points in a 11-1 run as Iona would go out in front 26-23 with nine minutes left in the half.  Jones stepped up in a big way since Michael Glover and Scott Machado each had two fouls in the first half.

Loyola responded with a half ending 13-5 spurt.  Justin Drummond and J'hared Hall combined for nine of those thirteen points. Loyola would go into halftime leading 36-31.  Patsos left with a smile on his face at the end of the half, seemingly pleased with his team's first half performance. 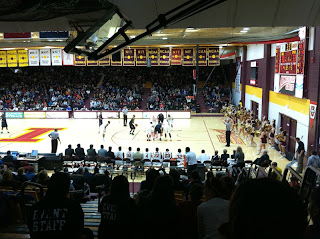 Scott Machado has received a lot of national press for his amazing assists totals and rightfully so.  But the player that makes Iona successful is Michael Glover.  He averaged a double double last season and though he is not averaging a double double this season (averaging 19 points and 8.6 rebounds per game), his field goal percentage is up to sixty seven percent this season. His free throw percentage is also up to seventy percent this season.    When the offense runs through Glover, the Gaels are almost unstoppable. 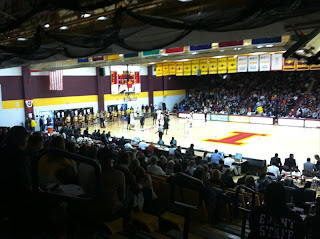 Quickly, Glover hit two dunks on assists by Machado and Kyle Smyth.  Loyola though maintained a five point lead, 46-41 as Olson continued to impress with his scoring ability, hitting a layup and a jumper.  But then Iona went on a 9-0 mini spurt as Jones, Machado and Glover combined for all the points to put the Gaels up 50-46 with a little over twelve minutes left.  Loyola came back with four straight points and the game was tied at fifty with about ten minutes left.

Then Glover took over.  He proceeded to score eight of Iona's next fifteen points over a span of four minutes.  The Gaels jumped out to 65-55 lead with six minutes left.  Iona finally seemed to have energy as Machado was piling up the assists and Jones was playing attack point guard for a good part of the game.

The ten point Gaels' lead would have been larger had not Olson scored all five points for Loyola in that span.  Olson was not done yet as he buried two three pointers over the next thirty plus seconds to cut the deficit to six, 69-63 with three and a half minutes left. 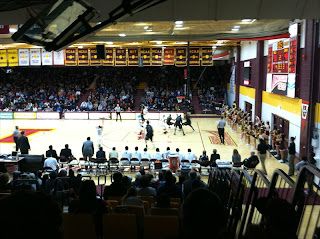 But Olson would foul out with a little less than three minutes left and Loyola had no one to pick up the scoring after he went to the bench.  Iona's big three; Glover, Jones and Machado would score the final five points of the game and the Gaels won 74-63.  With the win, Iona had sole possession of first place in the MAAC.

As we left the Hynes Center, I had to wake up Jonathan and carry him out to our car in the parking garage.  On our way home, Matthew fell asleep in the car.  It was a long day for a six year old and a four year old.  But they got to see the home team win twice.
Posted by Unknown at 9:18 AM