A Season Is Not Determined By Luck (Recap of Hofstra vs.Northeastern) 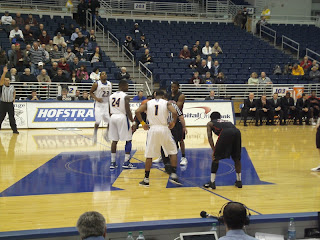 Over the years, there is luck involved in college basketball. I have seen several miracle half court shots go in.      Many times have I seen a buzzer beater to win a game.  There are strange bounces and questionable last second calls that have decided games.  And often I have seen as much bad luck as there is good luck.

But from my years experience of watching college basketball live, luck is not the overall determining factor in a team's overall success, whether a team is good or a team is a bad.  There are statistical reasons why teams are successful and why teams are not successful.  And if you watch the game closely, you can often see that play out on the court.  Good teams make their own luck and bad teams make their own luck too.

Case in point - Several basketball experts said Hofstra had a lot of luck going 14-4 in conference last season and 21-12 overall.   Ken Pomeroy's luck metric had  Hofstra as the sixth luckiest team in basketball in the 2011-12 season.  Furthermore, as John Templon of Big Apple Buckets stated on his site, Pomeroy's statistic noted that Hofstra won four more games than they should have last season.

This was noted in an article on this site called "Hofstra's 2010-11 Success Was All About Skill".  In my article, I disputed Pomeroy's statistic based on other statistics, specifically assists to turnover ratio, turnover margin and free throw shooting; three categories that Hofstra excelled in last season.  The Pride excelled in close games as well with a 9-4 record in games decided by seven points or less.  I noted it was because they had more possessions and hit their free throws down the stretch.  Basically, they did the little things right to win a game. 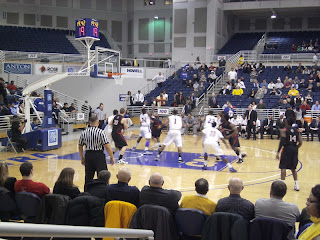 A week ago, the New York Times Quad Blog did a statistical historical analysis of the last ten seasons of teams in the CAA, which Hofstra is of course a member.  The analysis showed "that field-goal percentage defense and assist-to-turnover ratio are the statistics most correlated with teams winning the Colonial Athletic Association tournament."

In that same article, Hofstra Coach Mo Cassara stated "The most important statistic to me — that I really value — is assist-to-turnovers.. That’s the thing that I emphasize the most and I think correlates directly with winning.”

Shaka Smart was then quoted later in that same article stating " We look at turnover margin."  He went on further to say,"Sometimes it’s as simple as if we can force around 20 turnovers and have somewhere under 12 turnovers ourselves, then that’s 8, 10 extra possessions, and that’s huge for us."

Needless to say, I was thrilled to read all of those things. You had statistical correlation of why teams are successful.  And two successful coaches who valued ball possession, to me the most important part of a team's success.

But now here we are, one season later.  Hofstra entered their game with Northeastern with as many losses in conference this season than all last season and a losing record overall.  And of course, people have commented that luck has reversed its fate on the Pride this season.

And this season certainly has not been about a lack of heart or lack of talent.  The Pride have beaten Iona, Cleveland State and LIU, three very good teams that all currently lead their conferences.  I personally saw all three of those games and Hofstra played with intensity, grit and showed a lot of skill.

However, I am here to tell you again, it's not luck that Hofstra was 6-10 overall going into this game.  It's in the stats.  And the game against the Huskies sadly proved it again. 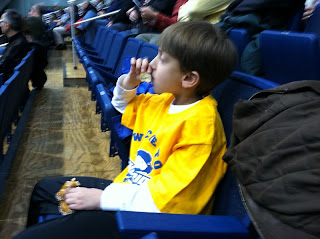 When I got to the Mack Center about twenty minutes before tipoff last night, I could tell the energy was lacking in the building.  First, there was no pep band, no cheerleaders and no dance team there.  The Lions' Den student section was barely noticeable due to there being no undergrad classes in session. Being a school night, there weren't a lot of kids there, sans the CYO team playing at the half and my six year old son, aka my color analyst Matthew.  It felt empty in Hempstead, and I wondered how that would affect the home team.

But it was the road team that came out flat.  The Huskies looked horrible at the beginning, missing their first seven shots.  Meanwhile, the Pride came out with energy and scored the game's first nine points as Stephen Nwaukoni continued his recent improved play with two hard earned layups.

But the reason the old, tired cliche of basketball is a game of runs is used so often is that it is so true so often.  And sure enough, Northeastern responded back with a run of their own, scoring the next twelve points as Hofstra forgot how to score, missing four straight shots and turning the ball over twice.  Joel Smith had eight of those twelve Huskies' point as they went up 12-9 with a little over eleven minutes left in the half. 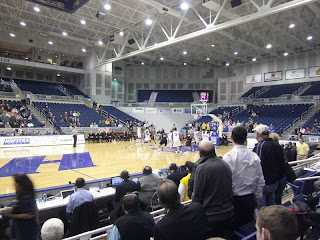 Nathaniel Lester's three point play tied the game at twelve.  And then both teams managed to struggle together as they each scored an additional twelve points over the last ten plus minutes.  The game was tied at twenty four at the half and rightfully so, since their stats were so much similar.  Same number of field goals made, nine.  Same number of three pointers made; two.  Same number of free throws made; four.  Neither team shot well from the field; Hofstra 34 percent, Northeastern 39 percent.

The fans weren't pleased with the first half.  One season ticket holder I know said "This game is hard to watch".  My friend Tieff said "It's bad playing worse."  My color analyst was even harsher with his criticism.  At the start of the second half, I asked him "What do you think of the game so far?"  Matthew covered his eyes and grimaced.

The second half was strange.  At times, Northeastern's 3-2 zone gave Hofstra fits, as the Pride turned the ball over three times in the first four and a half minutes.  Yet when they solved the Huskies' defense, they hit their shots, hitting ten of their first sixteen attempts in the second half, often easy layups in the paint .  With nine minutes left in the game, Hofstra was up 50-43.

But the stats started adding up and were not in Hofstra's favor.  First, the Pride turned the ball over four times in the next five minutes. They would have sixteen turnovers on the game.  Meanwhile, Northeastern, the team that averaged the second most turnovers in the CAA coming into the game at sixteen per game, only had ten turnovers on the night and had only one turnover in the final fifteen minutes of the game.

Also,  the Huskies couldn't miss from the field down the stretch, or perhaps the Pride couldn't stop them.  Coming into the game, Hofstra's two point field goal percentage defense was an unseemly 50 percent.   And Northeastern took advantage over those last nine minutes.  During those final nine minutes, the Huskies would shoot eight of twelve from the field, all two point field goals.

Northeastern would tie the game at fifty six on a jumper by Jonathan Lee.  Lee scored nineteen of his twenty one points in the second half, as he hit big shot after big shot.  And if it wasn't Lee, it was Smith who came through for the Huskies. His old fashioned three point play tied the contest at sixty with a little less than two minutes remaining in the game.

After Quincy Ford put the Huskies up two with two free throws, Lester came back with a strong layup to tie the game at sixty two.  But just like their losses to Florida Atlantic and James Madison,  Hofstra would again feel the sting of a late jumper.  Lee hit one with ten seconds left to put Northeastern up 64-62. 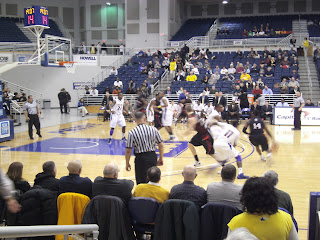 But unlike those two previous games, this time the Pride  had more than enough time left to tie or win the game.  After a timeout, Nathaniel Lester drove up the court against the Huskies' pressure.  But he would dribble the ball off himself out of bounds.  Their last and most crushing turnover of the game. After Hofstra fouled Lee off the inbounds play, Lee missed the front end of an one and one.  The Pride grabbed the rebound, but Lester's half court shot fell way short.  Another close game, another Hofstra loss, 64-62. The Pride were now 0-5 in conference and 6-11 overall.

As DefiantlyDutch, Jerry Beach noted in a tweet, the Huskies would score on seventeen of their last nineteen possessions.  So despite Hofstra shooting sixty percent in the second half, Northeastern shot fifty eight percent.   And when Northeastern didn't hit a field goal down the stretch, they went to the line, hitting five of their seven free throws. 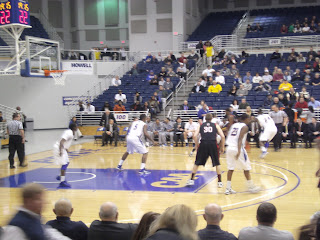 But you couldn't say that about the turnover margin.  As mentioned Northeastern had ten turnovers, Hofstra sixteen. That meant several more possessions for the Huskies than the Pride.  In a two point game, you could definitely say that was the difference.

Hofstra had seventeen assists to sixteen turnovers. Coming into the game, Hofstra was ninth in the CAA in assist to turnover ratio at 0.7.  Last season, the Pride were first in the CAA at 1.3.  And last season Hofstra was third in the CAA in turnover margin at + 2.29 per game.  Entering the game last night, they were fifth at +.69 per game.

This season, the Pride are 1-6 in games decided by seven points or less. And based on the statistics, you can say that most of that has to do with assist to turnover ratio and two point field goal percentage defense.  It doesn't have to do with luck.

The 1,654 fans that were mostly quiet for the entire game left the arena seemingly numb.  They had already seen the last second losses to James Madison and Florida Atlantic.  Perhaps they knew when the game was close, the statistics didn't favor the home team.   It didn't again last night.
Posted by Unknown at 7:45 AM