It's Never Over Till It's Over (Recap of Manhattan vs. Iona) 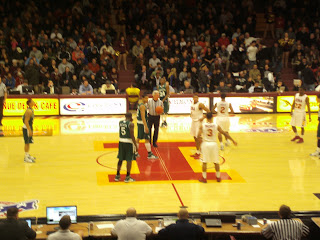 Entering last night's game with Manhattan, Iona had been on a serious roll since their loss at Hofstra at the end of December.  The Gaels won three straight conference games by a combined total of seventy two points.  And I had seen two of the wins in person, the 95-59 dismantling of Siena at Madison Square Garden and a 73-61 win at home over Niagara.   They were looking to make it four straight with a win over the Jaspers and remain unbeaten in the MAAC.

Manhattan was coming off a big win themselves, a hard fought 53-51 win over Fairfield, the team considered by many to be the biggest challenger to Iona.  It was a much needed win for the Jaspers after losing two straight conference games.  But Manhattan has been playing well as their 10-7 record indicates.  I also saw them win impressively at Hofstra.  Now the Jaspers were facing their biggest challenge so far this MAAC season. 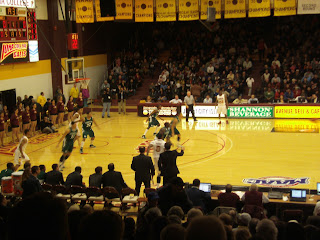 And the fans for both teams came out in droves to the Hynes Center to see the battle between the two New York City metro teams.   The game was sold out and near halftime, the PA announcer stated to the crowd that they must have their ticket stubs when they leave the gym, otherwise they were not allowed back in.  That actually is the case for all Iona games.  They just were making sure to tell the 4,125 fans in attendance that they were truly enforcing it last night due to the sell out.

As Matthew, my friend Tony and I made it into the gym right before the national anthem, I figured Steve Masiello's Manhattan team would be in its typical press defense, considering how Hofstra forced eighteen turnovers on Iona in the first half of their game.  But the always intrepid John Templon of Big Apple Buckets correctly predicted that the Jaspers might be better off playing half court defense.  And sure enough, the Jaspers settled in half court early in the game not risking a transition game with the Paul Westhead influenced Gaels. 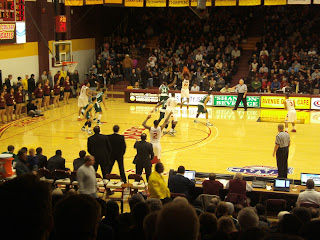 However, Iona seemed prepared for Manhattan and came out firing from three.  Sean Armand decided to channel his record breaking performance at MSG by burying four three pointers in the first six and half plus minutes.  The Gaels were already up 19-7 with twelve and a half minutes left in the first half.

Iona was not done yet from long distance.  When Armand went to the bench, Kyle Smyth took his place and just picked up right where he left off  from beyond the arc.  Smyth canned three three pointers of his own and the Gaels were up 35-20 with three plus minutes left in the half.   The Gaels hit nine of sixteen three point attempts in the first half. 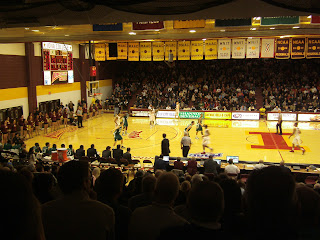 But the best part of the Gaels' offense is the conductor that runs it, one Scott Machado.  Machado is the rarest of birds, someone who is averaging a double double on the season with points and assists.  And last night, he was in top form.  If you watch Iona regularly, not a game goes by without the Machado alley oop pass to Glover for the dunk.  And sure enough not even five minutes in, Machado lob, Glover dunk.

However he was far from done.  There were eight other assists in the first half.  Most of Iona's three pointers were setup by Machado.  He also threw some sweet passes inside for layups.  The last basket of the half by Randy Dezourve was of course assisted by Machado, who had nine assists in the first twenty minutes alone.  The Gaels were up 39-22 at the half and seemed well on their way to another dominating victory. 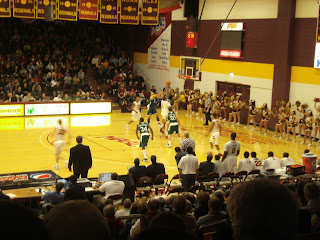 The Jaspers couldn't contain the Gaels from the perimeter in the first half.  Nor could they score in the first twenty minutes.  Iona had effectively shutdown the Jaspers inside. George Beamon (eleven points) and Emmy Andujar (five points) combined for sixteen of Manhattan's twenty two points as the team shot only twenty eight percent from the field in the first half.

Manhattan decided in the second half to break out their press.  And immediately Iona, thanks to Machado, broke the press for an easy layup to put the Gaels up 46-29 with about seventeen and a half minutes left.  There didn't seem to be an answer to shutting down Iona. 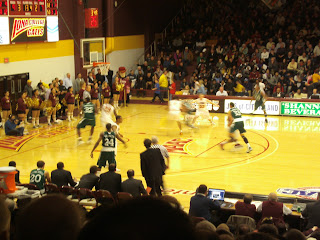 The bright side for the Jaspers was that they were moving the ball around much more effectively in the second half.  They got the ball inside to Rhamel Brown for layups.  Manhattan was hanging in the game and actually had cut the lead back to twelve, 46-34.

Machado kept responding for Iona.  He continued to find open Gaels for baskets and the assists were piling up.  His fifteenth assist was a pass to Smyth for another three pointer that put Iona back up by seventeen, 65-48 with a little less than eight minutes left.  I turned to my friend Tony and said "Dagger", channeling the great Bill Raftery.  I thought the game was over. 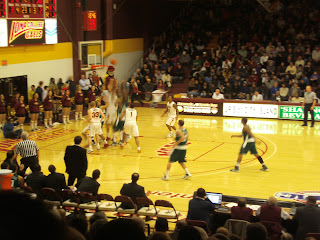 But someone forgot to tell Manhattan that.  Their press was starting to throw the Gaels off.  Right after that Smyth three, the Jaspers went on a 10-0 run with help from Iona becoming passive on offense to cut the deficit to seven.  The score was 65-58 with five minutes left.  The Jaspers' fans in attendance for the first time all night started cheering. A Let's Go Jaspers chant was started, which got the Gaels fans in attendance to start a louder "I-O-N-A Iona Gaels!"  chant.   The Hynes Center was now really rocking.

Manhattan continued to chip away at the lead as they were getting Iona into foul trouble. Glover picked up his fourth foul and now had to be careful inside.  And the Jaspers took advantage as Brown and Andujar hit layups.  Then Brutus buried a three pointer and Machado picked up his fourth foul.  After Andujar hit his two free throws, the Iona lead was down to two, 69-67 with two minutes left and the tension was peaking. 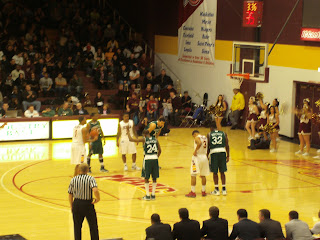 Then the unthinkable happened.  Perhaps the best point guard in the country, Machado turned the ball over on the inbounds pass.  Michael Alvarado stole the ball from him and hit a layup.  The Manhattan fans went crazy.  In the span of six minutes, the Jaspers had gone on a 21-4 run and tied the game at sixty nine.

Iona called timeout to try to regroup.  But after the timeout, the Gaels seemed to have no clue how to get an open look on Manhattan's zone.  With only a couple of seconds left on the shot clock, Smyth forced a three pointer and Manhattan grabbed the rebound.  The Jaspers could have taken the lead but Beamon was called for an offensive foul.

Machado then drove the lane and missed a tear drop jumper.  His fancy tip in try missed but the ever present Glover was there for the offensive rebound and got hammered when trying the putback.  He went to the line but only hit one of two free throws to put Iona up 70-69 with thirty seconds left. 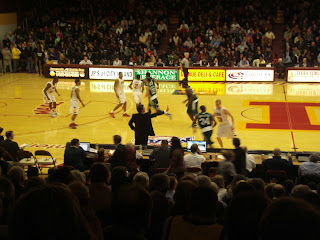 Manhattan now had a second chance to take the lead. Andujar missed a layup.  But Brown, who was so dominant down the stretch for the Jaspers with fifteen second half points, got the offensive rebound, hit the putback and was fouled.  Brown hit the free throw and the Jaspers had their first lead since the first thirty seconds of the game, 72-70 with eight seconds left.

Iona called timeout to setup a play to tie or win the game. With all the Iona fans on the edge of their seat, I am pretty sure the Gaels had not drawn up the prayer that Momo Jones hit with three seconds left.  The game was tied at seventy two and the Hynes Center was incredibly loud.

But instead of running out the clock and force overtime, Masiello wisely called timeout with 1.3 seconds left on the clock with the ball at midcourt.  My friend Tony turned to me and said "Great timeout".   The Jaspers had to either throw an alley oop pass or it was a quick catch and shoot.  Tim Cluess wisely put his tallest forward, Taaj Ridley out on the inbounds pass.  Manhattan barely got the ball into Andujar before five seconds was called.  He turned and with the Iona player directly in his face shot the ball from way beyond the three point line. 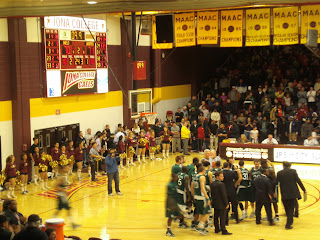 With everyone in the arena standing and watching the shot, the buzzer sounded.  The ball banked in to the net.

The Manhattan players rushed the court and mobbed Andjuar.  Outside of the screaming Jaspers' fans, the Gaels' fans were stunned in disbelief.  However, the game wasn't over yet, despite all the Manhattan players leaving the court.  The officials gathered at the scorers table to review the shot.  The Jaspers came back on the court as you could see Masiello apologizing profusely to one official for having sent his players in the locker room.

Iona fans were hoping that the shot went off after the clock hit zero. It took an usually long time to review the shot. I guess the officials wanted to make sure they were right.  And finally they made their decision.

The shot was good.  Ball game.

Manhattan had completed one of the most amazing comebacks I ever witnessed.  The Jaspers outscored the Gaels twenty seven to seven over the last nearly eight minutes of the game.  Beamon had twenty one points to lead Manhattan. Brown had a double double with seventeen points and eleven rebounds. And the man of the day, heck maybe the man of the season for Manhattan, Andjuar had fifteen points.

For the Gaels, Glover had eighteen points. Smyth and Armand each had twelve points, all on threes.  Finally, Machado had eight points and sixteen assists, but only one assist came in the last almost eight minutes of the game.

It might be the last time I ever say "Dagger" with eight minutes left in a basketball game. I now know better.  Yogi Berra was right. "It's never over till it's over."