The Most Underrated Team on Long Island - Part I - St. Joseph's Defeats Purchase 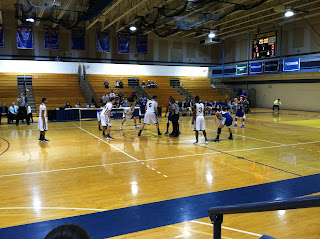 Over the past five seasons, the St. Joseph's Eagles have reached the postseason in Division III.  Four of those times were in the ECAC Metro Tournament.  But in the 2008-09 season, the Eagles went 24-4, won the Skyline Tournament Championship, defeating Farmingdale State and made the Division III NCAA Tournament. The Eagles would lose in the first round to DeSales, a team that made it to the Elite Eight that year. Over those five seasons, the Eagles were 101-38 with three twenty plus winning seasons.

Four years ago, I had the pleasure of interviewing Coach John Mateyko, the head coach of the Eagles.  You couldn't meet a nicer man.  Coach Mateyko is only a part time coach.  His full time job is a financial planner, but his background in basketball is vast.  The above linked interview/story, which I highly encourage you to read, gives you all the details on John Mateyko's basketball background.  However, a key detail for this story, which is the first of two on the St. Joseph's program, is that he was the assistant coach for Tim Cluess at St. Mary's.  As everyone knows, Cluess is the current coach of Iona and is also Mateyko's good friend. 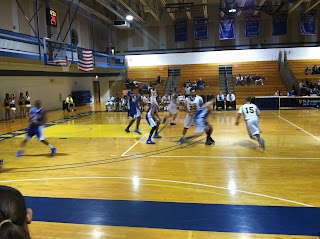 I watched a number of St. Joseph's games in the 2007-08 season, including their regular season home win over Farmingdale State, and the Skyline Championship game, which they lost at Farmingdale State.  The Eagles had a terrific guard in number three, David Acree, who set the all time St. Joseph's scoring record the next season.

As I noted, in 2008-09, the Eagles made the NCAA Tournament. Behind Acree and J.J. Walsh, a former NAIA Player of the Year, who was also Acree's best friend, they finally took down Farmingdale State in the Skyline championship game.  Unfortunately, I couldn't make any games that season due in large part to my younger son's kidney issues and subsequent surgery in the beginning of March.  But I remember distinctly getting a message on my answering machine from Coach Mateyko after he won the championship that he so deserved. 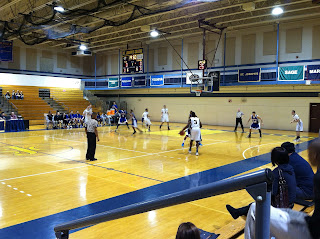 We have kept in touch a little bit over the last two seasons, but I haven't been able to catch any of their games, due in large part to that they often have the same schedule as Hofstra. However, I have kept track of his team's success over the past couple of years and yesterday, an opportunity arose to go out to Patchogue to St. Joseph's College to see one of their games.

On Friday, I contacted Coach Mateyko to let him know I was coming out and asked if he wanted to do another interview.  He immediately got back to me and was happy to do that.  The plan was for me to come out early and conduct the interview with him before their game against Purchase, the team that defeated St Joseph's in the Skyline Championship Game last season.

I made the familiar drive from the Southern State Parkway out east to Sunrise Highway to the Waverly Avenue exit.  The entrance to St Joseph's College is literally off the service road to Sunrise Highway.  I entered the Danzi Athletic Center and nothing had changed since the last time I had been there.  A student group was by the entrance selling candy just like I did the last time I was there for a game.  I walked down the corridor to Coach Mateyko's office, but he was not there. One of his players informed me if he wasn't in his office, he was in the bleachers in the gym watching the women's game.

Now when you go to a game at St Joseph's, there's no admission.  Yes, the games are free.  Where can you go for two hours of good entertainment for free?  Well, now you know of such a place.  The remainder of St Joseph's basketball schedule can be found by clicking here.

When I walked into the gym and made my way over to the St Joseph's fan section of the bleachers, I saw a familiar face.  Howie Hamlin, a colleague of mine at Hofstra, was there in the crowd watching his daughter, Danielle, a starting sophomore forward for the the Eagles.  Danielle averages 8.5 points and 6.7 rebounds per game. Howie and I talked for the last four minutes of the game, which was won by St Joseph's 59-37 over the Purchase women's team. 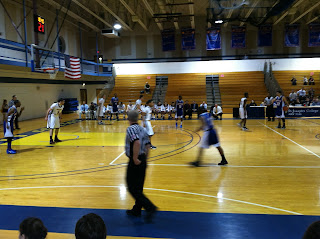 As Howie was leaving, I saw Coach Mateyko and he greeted me. He asked me where my older son was, but I told him unfortunately that my "color analyst',as I call Matthew, wanted to spend time with his mommy, since my wife had to work earlier in the day.  So, we went to a conference room and we talked for a little over ten minutes before he had to leave to get ready for the game.  The interview with Coach Mateyko will be the second part of this story later in the week.

But I can tell you some things about this season's Eagles team.  They use the same philosophy Iona uses - Paul Westhead's "The System"; More Possessions + More Shot Attempts = More Points.  Last season though, Coach Mateyko switched to a four guard lineup, which caused match-up problems for his opponents.

This season, he has used that same four guard lineup to a 10-0 Skyline conference start and a 14-2 record overall entering yesterday's game. One of the wins was a 90-76 road win over #18 ranked Eastern Connecticut in the championship of Eastern Connecticut's Tournament.  The Eagles actually have nine votes in the current D3Hoops.Com Top 25 Poll.

Of their two losses, only one has come against a Division III opponent, Ramapo, who had received a significant number of votes in that D3Hoops.Com poll earlier in the season.  The other loss is to Yale.  Yes,  St. Joseph's traveled to New Haven and played the Division I Bulldogs on their home court in December.  Yale went out to a 29-4 lead before St Joseph's rallied and actually cut the lead to one, 44-43.  They trailed at half only by three points before losing to the Bulldogs 101-86. 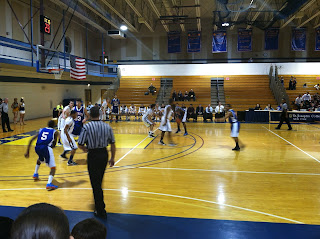 Before the game started, St Joseph's did a three pointer drill.  Meanwhile, Purchase was practicing a side to side defensive drill as the two assistants passed the ball from one side of the court to the other.  Next, one assistant drove toward the basket and the entire Panthers team dropped on their backs as they did a charge drill.  I haven't seen that drill before.

After the teams were introduced, the Cub Scout Pack 40 came out. Instead of the National Anthem, which was likely played before the women's game, the Cub Scouts, after some encouragement by the public address announcer, gave the Pledge of Allegiance.  Afterwards, they went up into the bleachers behind the scorers table and appeared to be playing tag the rest of the first half.

Coach Mateyko told me that he had a good shooting team and I quickly found out that was the case.  The team that leads the Skyline in three point attempts, 469, and three pointers made, 162, hit five of their first six baskets from beyond the arc.  But Purchase hung around due to hitting ten of twelve shots from the charity stripe. In fact, the two time defending Skyline Conference Champion Panthers took a 32-29 lead with 6:57 left in the half. 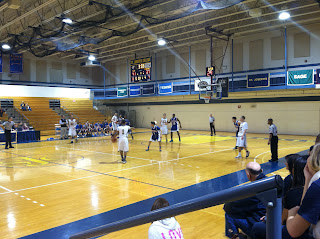 But as Coach Mateyko noted, the Eagles' style of play forces a lot of pressure on teams to keep up with them.   On offense, they spread the court with four guards and one forward in the middle.  They move the ball around quickly with passes and setup ball screens for open corner looks. Black is particularly effective at finding open people. On defense, they setup traps and force turnovers.  The three starting guards on Purchase had a combined ten turnovers on the day.  It's basically like watching Iona, minus Michael Glover.

The second half started out like the end of the first. Velasquez buried a three pointer, then hit a layup to put the Eagles up by eleven, 53-42. The Panthers, like most defending championship teams, refused to quit.  Purchase cut the deficit down to four, 56-52 with 14:45 left, due in large part to their three starting guards, D.J. Smith, John Pressley and Amar Reynolds. Smith, Pressley and Reynolds combined for forty two of Purchase's seventy points on the night. 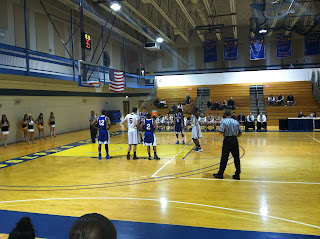 But again, St Joseph's style of play was too much for Purchase to handle.  Over the next eleven minutes, the lead start to slowly grow.  It started with, what else, two three pointers by Velasquez and Laurent.  Then the Eagles, led by Laurent, starting driving the lane for layups.  The lead would become for the most part ten or twelve points.  But after another Laurent layup, St Joseph's was up by eighteen 84-66 with 3:38 left in the game.

All that was left was for both teams to start clearing the benches, which resulted in an interesting development.  Purchase Coach Jeff Charney brought freshman Joel Neri into the game for the first time.  Neri stands seven foot tall and he dwarfed St Joseph's biggest player, the six foot six Syed.  Neri also showed a touch, hitting two of his three shots easily.  Considering the Eagles lack of size, you had to wonder why Neri wasn't in there sooner.  But Charney has done a terrific job with the Panthers, leading them to two straight Division III NCAA Tournament berths, so I am sure he knows Neri needs seasoning.

After the Laurent layup, St Joseph's was content to run out the clock and didn't score the rest of the way.  The Eagles didn't need to as they won 84-70.  Jiimenez led all scorers with twenty points, while Velasquez added seventeen points and Laurent had fifteen points.  Black had only nine points, six under his season average.  But he more than made up for it with eleven assists and just one turnover. 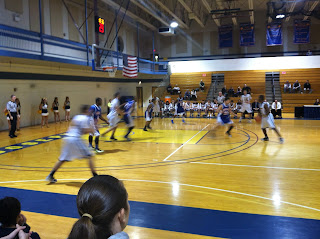 The Eagles had nineteen assists and only eleven turnovers.  They had as many field goal attempts as the Panthers, sixty, but hit seven more of their shots to shoot fifty three percent for the game.  They also hit fourteen of thirty one three pointers, while holding Purchase to only two of thirteen from beyond the arc.

As I left, I made eye contact with Coach Mateyko, waved my hand and yelled "Good game, coach".  The Eagles still have seven games left in conference to play before the Skyline Conference Tournament.  I took a look at their schedule and noticed they have a road game at Old Westbury on Feburary 15.   It wouldn't be the first time I celebrated my birthday with a basketball game.

(Part two of this story, my interview with Coach Mateyko will be in the next couple of days)
Posted by Unknown at 12:35 PM