Barbecue and VCU in Newark (Recap of VCU vs. Delaware) 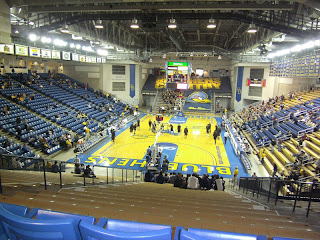 Over the years, I have been fortunate to go to many college basketball venues.  Some, like the Webster Arena in Bridgeport, aren't conducive to college basketball games, especially when there are only two thousand people in the stands.  Others, like the Acierno Arena at the Bob Carpenter Center on the campus of the University of Delaware truly stand out.  And it's not just for the basketball experience that makes the Bob so enjoyable, it's also the culinary experience that makes me come back there year after year.

Yesterday, I picked up my partner in crime Tieff and made the all too familiar drive down the New Jersey Turnpike/I-95 to Newark, Delaware.  When we got to the Bob Carpenter Center at 2:00 P.M.,  I noticed that there were very few cars in the parking lot.  Turns out what I thought was a 2:00 P.M. game was a 4:00 PM game being televised on the CAA Network.  So we headed to a nearby McDonald's and then came back to the Bob at 3:00 PM. 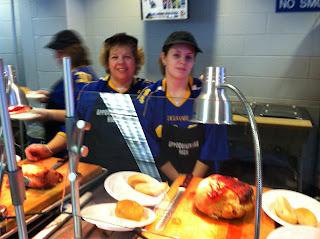 A few years ago, when I went to my first Hofstra-Delaware game at the Bob, I learned the ways of the barbecue station.  When you walk into the Bob and head up the main set of stairs to the Acierno Arena, to your right is the Man vs. Food experience of CAA basketball.  Here lies a concessions area with a barbecue carving station.  For a reasonable price, you can have your choice of one large sandwich roll or two smaller sandwich rolls filled with either barbecue pork, roast turkey or roast beef, along with two delicious sides.

Normally, I have the barbecue pork on the large sandwich roll.   But my server convinced me to do the two smaller sandwich rolls, so this way I can have two different tasty choices.  I chose the barbecue pork with the additional sweet sauce and the barbecue beef, with the gravy.  They cut the beef and the turkey right there for you.  Then comes the two sides.  Nothing better than baked macaroni and cheese and german potato salad.  Ah, heaven. 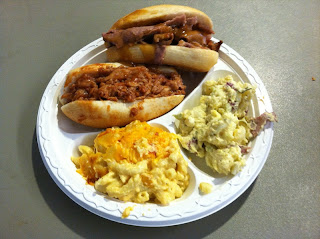 Another nice thing about this concessions area is that there are large roundtables for you to sit and eat your barbecue cuisine.  Often you are sitting with other fans at the same table.  I remember a couple of years ago, Tieff and I sat with a family.  Their daughter was driving on I-95 to meet them there.  We had noticed a lot of highway patrols that day and told the mother about that.  She gave her daughter a call and advised her not to speed.  Hey, anything we can do for fellow basketball fans.

I never refer to the place the Fighting Blue Hens call as home the Acierno Arena.  It's always been the Bob to me and to many others.  It was the home of many America East Tournaments when Delaware was part of that conference.  Now it's just another one of the twelve regular season venues in the CAA.  The Fighting Blue Hens were home to the Rams of VCU in yesterday's contest.  Many VCU fans made the trip up from Richmond.  In fact in my row, it was mostly made up of  Rams' fans.  Have Final Four Appearance, will travel. 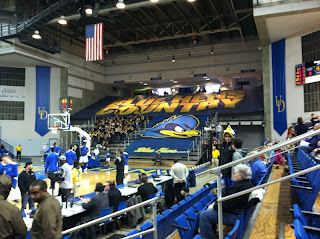 The Blue Hens and the Rams have both got out to 3-2 records in the CAA.  So the game was for a share of fourth place in the Colonial, which is important.  The top four teams in the conference get first round byes in the CAA Tournament.  And since the tournament has expanded to twelve teams in the 2005-06 season, no team that has not had a first round bye has won the CAA Tournament.

The game started out with VCU showing terrific ball movement on offense, but they didn't have much to show for it as they struggled for the field.  In the first half, VCU shot an abysmal one of nine from beyond the arc and shot twenty eight percent from the field.  Big Time Bradford Burgess was having a rough first half shooting one of seven from the field.  But he hit seven of eight free throws and still had ten points in the first twenty minutes. 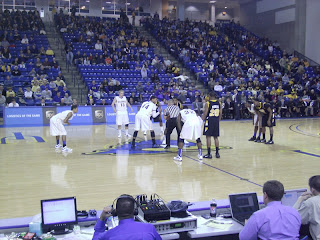 But Delaware struggled even worse.  First, their offense doesn't seem to have many set plays. It really is based on Devon Saddler, the combo guard for the Blue Hens, creating plays off the dribble, whether it's a pass to Kyle Anderson, the Blue Hens long distance shooting guard or inside to Jamelle Hagins, or Saddler taking a shot himself.  They didn't know how to attack VCU's zone defense and not once did a Blue Hen big man go into the middle of the zone and try to hit a jumper.  Saddler had a run first half, shooting one of nine from the field.

The Blue Hens didn't score a point for nearly the first nine minutes.  But thanks to the Rams' shooting woes, they were only down 8-0.  Then just like that Saddler and Anderson hit three pointers and it was a game at 8-6 with ten and a half minutes left. 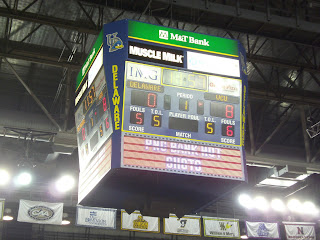 Then came the play of the game.  VCU's Juvante Reddic, a six foot nine sophomore forward, got the ball at the top of the key.  Reddic then in a blur, flew by his man and hit a layup and was fouled.  Our whole row was stunned in amazement.  Tieff and I had never seen someone that size drive the lane so fast.  It was incredible. Reddic hit the free throw to put VCU up 14-10.

The game was relatively close for the next several minutes.   Then around four and half minutes left in the half, VCU went on a 9-2 spurt led by Burgess, Reddic and a technical foul called on Delaware Head Coach Monte Ross.  The Rams were up 30-19.   Delaware scored four straight points to cut the deficit to 30-23 at the half. 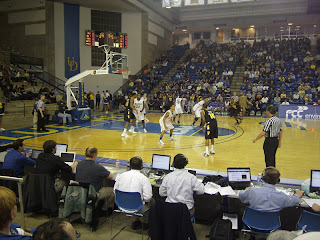 At halftime, we made our way to the ice cream stand located behind our section.  It was hard ice cream and they had some terrific choices. I decided to have the "Twist and Scotch"; butterscotch ice cream with chocolate covered pretzels.  You could actually smell the ice cream and it was absolutely delicious.

The start of the second half saw Josh Brinkley go to work for the Blue Hens.  Twice Brinkley scored baskets on offensive rebounds and both times he was fouled.  He made both free throws and hit one of two free throws on an earler foul as he scored Delaware's first seven points.  Saddler followed with a layup and Delaware had cut VCU's lead to four, 36-32 with 15:50 left in the game. 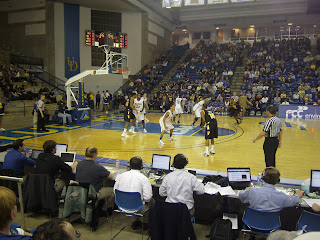 The media timeout came at the perfect time for the Rams, as it allowed them to regroup. VCU then went on a 12-2 spurt over the next four minutes.  Treveon Graham and Briante Weber, two of the Rams' freshmen buried three pointers to give VCU a 48-34 lead.

Saddler scored four of Delaware's next six points and cut the lead to eight, 48-40 with a little less than ten minutes left.  But it was as close as the Blue Hens would get the rest of the way.  Saddler's shooting woes continued as he was two of ten from the field in the second half and only scored ten points on the day. 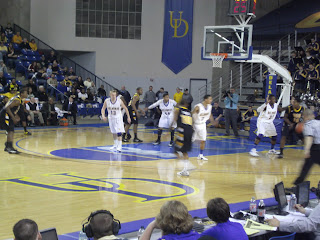 Meanwhile, Burgess came alive late in the second half with two three pointers for the Rams.  When Reddic hit an emphatic dunk with two minutes left to put VCU up 65-50, all that was left was for Shaka Smart was to clear his bench. Late in the game, seldom used but highly recruited Rico McCarter tried to go for a slam with his team up twelve with twelve seconds left.  Hagins let it be known that was against basketball code by trying to block the shot but making sure he fouled McCarter hard.  McCarter got a statistic in the game, making one of two free throws to make the final score VCU 68 Delaware 55. 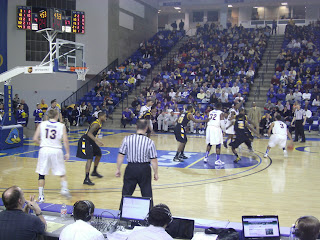 Despite being four of fourteen from the field, Burgess had eighteen points to lead VCU.  Reddic added eleven points, nine rebounds and one everlasting memory for me.  Four other Rams' players scored eight or nine points in the game.  For Delaware, Brinkley (thirteen points, 11 rebounds) nd Hagins (ten points and fourteen rebounds) each had double doubles and Saddler had his aforementioned ten points.

As Tieff and I made our way back to New York, it was another successful road trip.  Terrific barbecue, delicious ice cream and good college basketball.   Hoops and food.   You can't beat it.