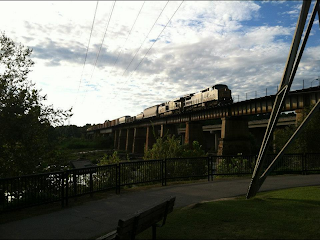 There are several things I have learned since I moved to Columbia, South Carolina in mid-August. First, things are slower paced. Much slower paced. Excluding highways, I have yet to see someone greatly exceed the speed limit on roads in Columbia.  Also, the only trains you see in Columbia are freight trains and you hear freight train whistles all day and all night.  That's something new for this Long Island boy.

The third thing is that there is this transportation freedom in South Carolina. There is no helmet law as pertains to motorcycles, mopeds etc. In fact, the first person I saw wear a helmet was a bicyclist. Also, there is no motor vehicle safety inspection in South Carolina (at least for passenger cars/trucks). That explains the old Fleetwood Cadillac with no working brake lights, no turn signal and burning fuel like anything that I was behind as I went to the state DMV to register my car. They say New Hampshire is the "Live Free or Die" state. In that regard, New Hampshire has nothing on South Carolina.

Finally, unlike metro New York, the Division One basketball universities and colleges are spread out much further. The closest D1 schools to me in Columbia are of course the University of South Carolina, Winthrop, College of Charleston, Charlotte, Coastal Carolina, Furman, Wofford, South Carolina State and the Citadel. Winthrop is probably the closest school to USC, about a hour away in Rock Hill. So my road trips this season will need to be planned with travel considerations in mind. 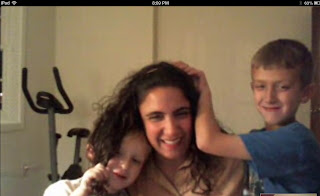 But that's not the only thing going on. I still have my wife and kids up in Long Island until the house closes. Until recently, I hadn't seen them in a month and a half, outside of Skype calls. As much as I love Skype, it's not the same. Long Island is where I am at the moment due to Hurricane Sandy.  With thanks to an understanding boss, I am here to make sure everything is OK, to watch my kids while my wife has to work extended hours at her job and hope there is no damage to the house. So to say that there are things pressing in my life, well I guess that's an understatement.

Recently, two of my mid major friends/writers asked me if I was going to be a part of the new Mid Majority season, which is based on writer teams. I told both of them that I was going to pass on this season because there is just too much going on otherwise in my life to commit to another site, let alone keep up with my own site this season. I will certainly follow their work and I wish them the best (plus I have already bought a season package as my way of supporting the site). 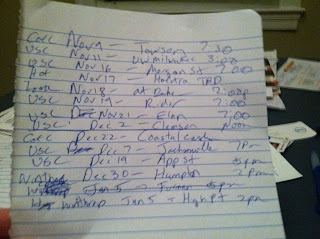 Don't get me wrong, as you can see already from this piece of paper, I am planning out the coverage to my season. It's around this time of year that I plan out what games I am going to for the upcoming season. In the past, it centered around the Hofstra season. The home games were a given, then I could see which Hofstra road games I could attend. Then, having ties to Iona and Stony Brook, I would review their schedules and plan accordingly. Also, having ties to the Iona women's basketball program, part of my schedule revolved around the Lady Gaels. Finally, I made sure my first weekend in March was free so I could attend the CAA Tournament. Then if local teams made the NIT, CBI or CIT, that was gravy.

Last season, due to my work with Mid Majority, I expanded my coverage. As much as I could, a lot of my coverage was based on NEC and MAAC schedules, as well as other CAA teams. I watched an amazing CAA Tournament and got to see Drexel and UMass in the NIT. It was the closest thing to being a true college basketball beat reporter I had done in my seven years of writing for my site. Covering fifty nine Division I men's games, fifteen Division I women's games and a couple of St Joseph's Division III games, while having a full time job, was amazing and at times exhausting.

Now, I have a whole new environment to work with down here. USC will be the main focal point, which I am sure disappoints my mid major followers. However, thanks to relative proximity, I have the ability to give some southern mid majors like College of Charleston, Winthrop and even Wofford more coverage than they might currently have on the blogosphere. And having UNC Wilmington only three and a half hours away is going to come in handy come February 2013.

Rob Russell of GheorgeTheBlog wrote a terrific article today about how much the CAAHoops community will miss Mike Litos, who is now going to be the analyst for VCU radio broadcasts. CAAHoops will still be fine, because Litos wisely enlisted the aid of JMU SID Jeff Warner and his Sports Communications Class' students.  But it won't be the same not seeing Litos' tidbits on a daily basis after so many years.

But you can't blame Michael for passing up an incredible job opportunity.   I sort of did the same thing moving down to South Carolina.  Having covered mostly CAA basketball for the past seven seasons, I have so appreciated the friends I have made covering the Colonial League and New York City Metro basketball. There's a lot of us that use the hashtag #CAAHoops. And to not be at just about all Hofstra games after having been a season ticket holder since the early 2000s, well it's definitely very sad to be away from the many friends I have at the Mack Center.

However, I will still follow and write about the CAA from afar and in some cases, from up close. My first CAA game is actually Towson at College of Charleston, which hopefully will be a CAA member soon. Also, since my younger son's November 17 birthday falls on a Saturday, it just so happens to coincide with a Hofstra 2K Classic Tournament home game. So I will be back in my old Hempstead stomping grounds that day.

However, how many games I cover this season overall is not my pressing concern. As I noted, there is so much else going on right now, especially having been at my new job for only two months. As a result of this opportunity at USC, my life has changed radically. Writing about college basketball, as much as I love it, is a hobby. It doesn't put food on the table, nor does it give my family a roof over their heads. I moved down to Columbia for a terrific job opportunity, quality of life, cheaper housing, and less stress. I figure in a year from now, things will be settled and this move will have been worth it. Time will tell. 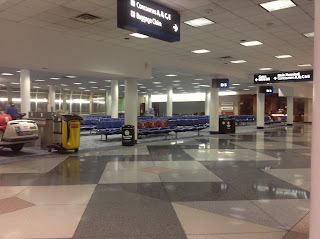 I wrote much of this article at 5:00 AM this past Saturday morning at Charlotte International Airport. It was the second weekend in a row that I was at Charlotte Airport. The previous weekend was a planned visit. This weekend again was due to Hurricane Sandy's impending impact on the Long Island area. I couldn't sit down in Columbia being worried sick about them. I had to be in North Bellmore with them. And again, as I noted, my wife has to work extended hours for her job, just like she did last year for Hurricane Irene. So I had to be here for my two sons.

So right now, as much as I love college basketball, it takes a seat to the real priorities in life. I don't know how many games I will cover this season and frankly, it's not a major concern to me. Once Sandy passes and hopefully is more Al Franken than Frankenstorm, then I will spend more time planning out my college basketball schedule. I know a lot of it will involve the University of South Carolina basketball team, so again, my mid major friends/fans will have to understand. However, until Chelle and the boys are down in Columbia, it's not my major focus.

As much as I love college basketball and as much as I love writing about it, it takes a back seat to the family, the new job and my future. It's the final thing I have learned in my two months in Columbia.

Everything is relative.
Posted by Unknown at 10:19 AM No comments: