The Dumpster Fire That Is Drexel


The last couple of weeks for me have been very busy.  Between work, starting a travel baseball team and a couple of road trips to Charleston and Elon for Hofstra basketball games late last week, sleep and a College Hardwood Post had been a rare commodity, just like a well played game by Fordham.

Thus I took a nap this evening after I got home and had dinner.  After my nearly two hour nap, I checked what was going on Twitter, caught up on a few things, then I noticed the Drexel - James Madison 54-35 score.  Ugh. Then I read this tweet of my good friend Jerry Beach, aka Defiantly Dutch.  I immediately went over to DragonsSpeak, the twitter feed of our friend Dan Crain, loyal Drexel alum and fan, who writes the Dragons Speak blog.

At about 8:30 PM, Dan tweeted "Let's Break Twitter".  Dan had had enough of what would turnout to be a Dragons 54-35 loss to a team that had just dismissed one of its better players earlier in the day, Andre Nation, who albeit was a true handful in his three years with the Dukes.  You would think that the Dragons would give a better effort against a team missing a player who averaged twenty seven minutes per game.  Basically Dan ripped into his alma mater, and rightfully so, for the play that he was forced to watch tonight.

But this was not a Monday morning quarterback rant.  Dan had predicted this in his preview of the Dragons earlier today.  Bruiser Flint, the longtime head coach of Drexel has a propensity to not bend in his ways and Dan knew what Bruiser would do this evening in his Thursday preview of the game.  He even nearly predicted how many points JMU would score this evening (he had the game as 56-48 JMU) and he wrote this gem.

Zone defenses are primarily beaten with quick ball movement, perimeter shooting and offensive rebounding.  Bru then has two options:  Flood the floor with guards who can't shoot, knowing that Allen, London, Wilson and Mojica will all get wide open looks from mid range and beyond.  The downside is that none of those guys have hit those looks before, and with only one forward on the floor against JMU's height, DU won't get any offensive rebounds.  The alternative is to leave two of those four guards on the floor alongside Damion and two big men, leaving just as many shooters on the floor (1) and the possibility to get stick backs and clog the lane on defense.

Just in case we haven't beaten this into the ground enough, look Tuesday for a stats post breaking down the 4 guard vs the 3.  It's ugly.

For my prediction, I'm assuming that Bru will show his stubbornness, because that's the track record.

So what did Drexel do?  The Dragons played a four guard set and proceeded to shoot four of nineteen from beyond the arc and twelve of fifty for the game. Twelve of fifty.  Yes, folks, that's twenty four percent.    And if you are basically shooting and missing the three on a zone, it stands to reason that you only get twelve free throw attempts, which they only hit on seven.  Thus, thirty five points.  Even Josh Verlin of the terrific City of Basketball Love tweeted that it was "an embarrassment". 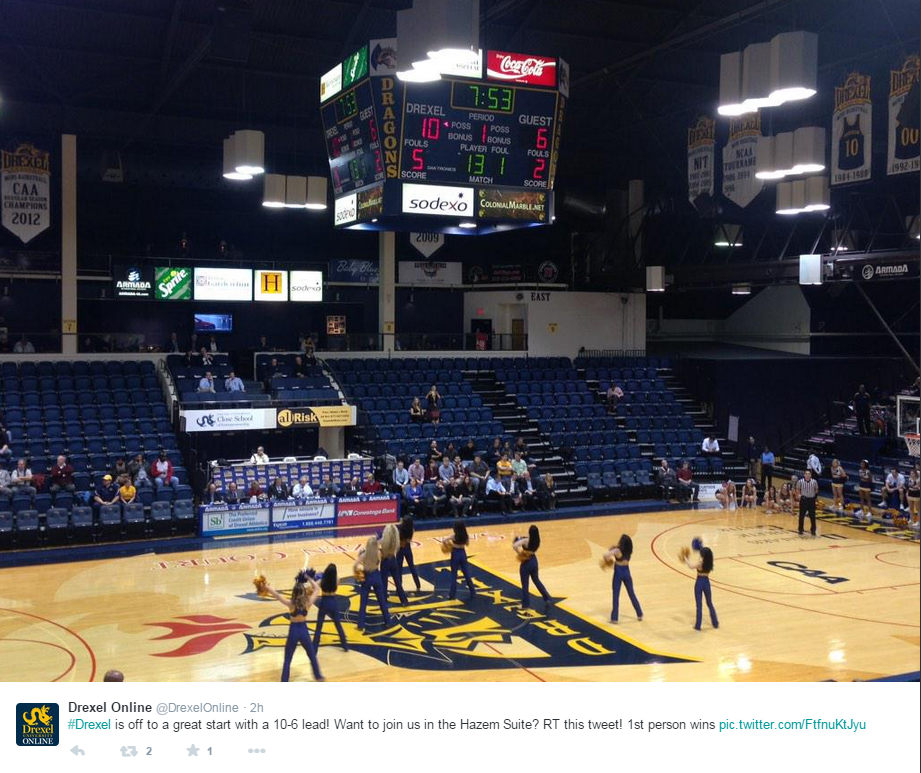 But if that wasn't bad enough, Through one of Dan's followers, I saw them retweet this picture from DrexelOnline.

I have NEVER seen the DAC, aka the Daskalakis Athletic Center, this empty.  Ever.  And for those of you who are the College Hardwood Marines, aka the few, the proud, the readers of my site know, I have been to more than my share of games at the DAC.  It's usually one of the more fun places to watch a game, because it can be loud, hot and a drain on a road opponent.

The Dragons are 3-13 now, 1-4 in the CAA.  Only three seasons ago, the Dragons went 29-7, 16-2 in the CAA and made the NIT Quarterfinals, before losing at home to UMass.  Heck, I was there for the loss to the Minutemen at the DAC.  The attendance for the game; 2,293.  There was definitely 2,293 in attendance that rocking night!   The amazing thing was that the only starter that graduated from that team that season was Samme Givens.   The future should have been so bright for Drexel.

So what happened to a team that in the span of three seasons may likely have twenty less wins than that 2011-12 Dragons team?

Well, first, that 2012-13 team seriously underachieved.   First, they suffered tough overtime losses to Kent State and Illinois State,  Then they lost Chris Fouch in the third game of the season.  Still, they had Frantz Massenat, Derrick Thomas, Dartaye Ruffin and Darryl McCoy, all key members of that 2011-12 team.  Plus Drexel added two talented freshmen in Damion Lee, who ended up being the leading scorer on that team and Tavon Allen.

Yet Drexel never recovered from the two overtime losses and the injury to Fouch and stumbled to a 13-18 record, finishing .500 in the CAA at 9-9 and quickly exited from the CAA Tournament at the hands of George Mason.   Brian Mull noted earlier that season that the loss of the post presence in Givens was a bigger loss than anyone could have realized for Drexel.

The 2013-14 team looked to be a better team with the return of Fouch, along with Lee, Massenat and Allen.   Unfortunately, Lee got injured five games into the season.   Still the Dragons started out strong, going 7-2 with wins over Alabama, Cleveland State, Illinois State and Rutgers.  Their only two losses were by five points and four points respectively to nationally ranked UCLA and Arizona.   The Dragons seemed to be back, especially when I saw them defeat Davidson at Belk Arena in December of 2013.

Then it all fell apart.  Drexel would go 9-12 the rest of the season and only 8-8 in the CAA.  The Dragons would then quickly be eliminated by Northeastern in the CAA Quarterfinals 90-81, in a game where Drexel was down several times by seventeen points.

What had started out so promising ended in flames.  Now this season.   It's a five alarm dumpster fire.

So what are the reasons for this?   First, injuries have been a huge factor.  Their only real point guard, Major Canady and one of their main forwards, Kazembe Abif were out for the season before even the season started.  Promising sophomore forward Rodney Williams suffered a stress fracture in his foot in late December and he's now out for the season.   Even seldom used Sooren Derboghosian is out indefinitely with a knee injury.  The Dragons are playing with basically a seven man rotation.

But as you can clearly tell from Dan's posts that it is also coaching style.  Bruiser Flint has at times done a very good job at Drexel.  His 2006-07 and 2011-12 teams should have made the NCAA Tournament.  But in the last nine seasons at Drexel, there also have been four teams at or below .500, another team that finished one game above .500 and another team that finished two games above .500.  Only three times in the past nine seasons has Bruiser won twenty games.

Based on Dan's blog, Bruiser is very set in his ways during a game and does not make adjustments.  He starts a four guard offense despite only one of them, Lee, being a really good shooter.  Allen has seriously regressed as a shooter since his freshman year.  His three point field goal percentage has gone from 36 percent to 28 percent to 26 percent over the past three seasons.  Yet Allen is attempting double the number of three point attempts, 5.4 as opposed to last season 2.7.

Yet Bruiser keeps using a four guard set and as Dan notes "Drexel is 1-6 in games where they have broken out the 4 guard set, beginning with the UD home game last year".   Drexel is also last in the CAA in three point field goal percentage at 29.4 percent.

The kicker is that Drexel is second in the CAA in free throw percentage at 70 percent, yet they have the fewest free throw attempts in the Colonial with 259 attempts going into tonight's action (that's sixteen per game).

When you also go with a four guard set, you leave yourself susceptible to inside scoring.  In the loss against UNC Wilmington, Dan notes that UNCW shot 60 percent on two point field goal attempts.  It also means that you are likely to get outrebounded.  The Dragons are 270th in the country in rebounds, dead last in the CAA in rebounds and eighth in the CAA in rebounding margin at -2.4.  For those of us longtime CAAHoops fans, this is sad to see, since we know that Drexel prided itself on toughness and rebounding.  The term "rockfight" started with Drexel.

It's sad to see Drexel at 3-13.  It's sad to see the DAC so empty.  And it's sad to see a friend like Dan so frustrated, along with many other Drexel fans, who are often the most creative fans in college basketball.

As Dan noted in a tweet tonight, Bruiser Flint is the third highest paid employee at Drexel.   After the past few seasons and what's happening this season, one highly wonders if that salary statistic will remain the same after this season.
Posted by Unknown at 11:26 PM