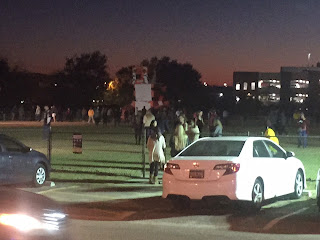 Last night, my color analyst, aka my older son Matthew, and I took in our first University of South Carolina Women's Basketball game of the season.  Weeknight games usually consist of my wife dropping off Matthew where I work, USC School of Law (by the way, in South Carolina, as Ian McCormick would tell you, the University of South Carolina is USC, not Southern Cal).   We then have a quick dinner at the Wendy's across the street, then we walk down Greene Street to Colonial Life Arena (CLA to us USC folks).

Yesterday evening, we took a detour.   It's Clemson Week, as the Gamecocks will play their annual football game against the Tigers on Saturday in Death Valley.  So Monday of Clemson Week means "The Tiger Burn", where students gather together for the annual event at the intramural field near CLA, which consists of music, festivities and where a giant, thirty foot constructed Tiger is set fire and burned to the ground by fireworks (which is then put out by the Columbia Fire Department).

I first saw the Tiger Burn four years ago with my good friend Tieff (if you don't know who Tieff is, then you are not a regular to this blog.  But peruse some back articles and you'll learn quickly).  We watched it from the Thirsty Fellow, an establishment conveniently located across from the intramural field.  There's nothing quite like having a good beer and watching a very large bonfire. 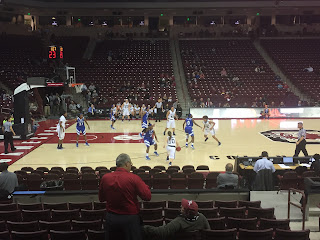 Matt and I stayed around for a few minutes.  Then we realized it would be several more minutes before the Tiger got lit more than Notre Dame's defense did in the second half vs. Virginia Tech on Saturday college football action.  So we made our way to our seats at CLA to watch USC take on Maine.

But when we got there, there was another game in progress; the third quarter of Saint Peters vs. Hampton.  USC was actually hosting three other teams in the Basketball Hall of Fame Women's Challenge and they would all play each other over a three day span starting on Sunday.  On Sunday, USC had already defeated Hampton 92-38, while Maine downed Saint Peters' 59-43.   The last day's slate of games on Tuesday will be Hampton vs. Maine and St. Peter's vs. USC. 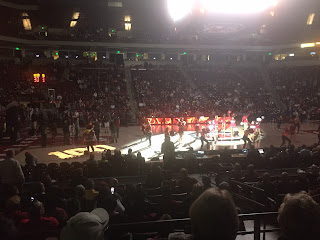 As for this game, well the Peacocks were certainly not the Gamecocks.  And that was just fine with the Lady Pirates. Their first four opponents on the season had been Northwestern, Iowa, NC State and South Carolina, all losses, with the lowest margin of loss being nineteen to the Wildcats.  So a non Power-5 Conference St Peter's team was a welcome change and Hampton took full advantage.  The Lady Pirates ran rings around a slower MAAC team that had won only four games all last season.   Hampton downed St Peter's handily 71-42.

Then we got to the main event.   South Carolina had struggled from the field early against Hampton. They only led 21-15 after the first quarter, before ramping up their game, outscoring Hampton by forty eight points the rest of the way.   There was no such issue against from the outset vs.  Maine.  A'ja Wilson hit the first three baskets for the Gamecocks.  Then after Kaela Davis made one of two free throws, Alaina Coates made two baskets.   South Carolina made seven of their first nine field goal attempts. 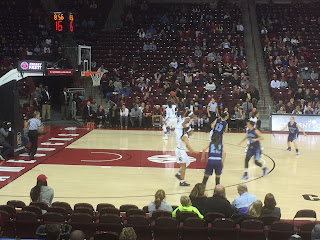 Meanwhile, the Black Bears shooting was as cold as typical winter day in Orono, Maine.    They missed their first eight shots.  And when they weren't missing their shots, they turned the ball over five times in the first five plus minutes of the first quarter.  South Carolina's height was just too much on both ends and thus the score was 15-0 Gamecocks with 4:49 left in the first quarter.

Maine finally got a basket and actually outscored South Carolina 5-4 over the last four minutes of the first half.  The Black Bears went to a 2-3 zone to force USC to shoot from the outside.   Maine actually got within twelve a few times in the second quarter, the latest being 22-10 with a little more than eight minutes remaining in the second quarter.  From there, USC would outscore 21-9 the rest of the quarter. 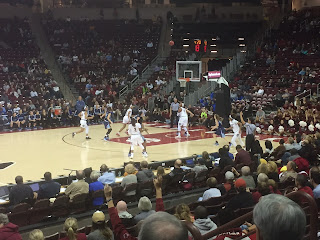 USC went up by thirty eight late in the third quarter, 60-22.  Then coach Dawn Staley brought in her freshmen to play most of the fourth quarter.   The final was 79-42 USC.   With transfers Davis and Allisha Gray, with Wilson, Coates, returning point guard Bianca Cuevas-Moore and talented freshman reserve Mikiah Herbert Harrigan, the Gamecocks have plenty of balanced scoring. as the six players mentioned scored between seven and fourteen points, with five of them in double figures (Cuevas-Moore had seven points).

Today is the last day of the Basketball Hall of Fame Women's Challenge.   Maine and Hampton get to see in the first game which team will finish with two wins in the tournament.  Meanwhile, St Peter's looks to have another tough day in store as they play South Carolina. 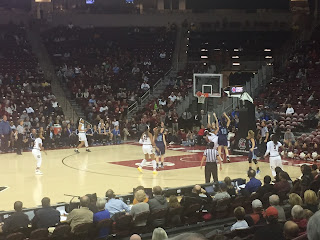 At least for the Peacocks, they won't be burned to the ground like a 30 foot tiger effigy was last night.  There will be a tomorrow for St Peter's.
Posted by Unknown at 12:17 PM No comments: