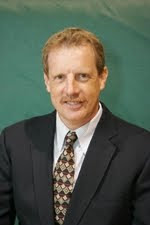 I am writing to you as an alum, Hofstra Pride Club Member, and Men's Basketball season ticket holder. Due to the recent hiring of former Men's Basketball Head Coach Tom Pecora by Fordham University, obviously you currently have a vacancy at the head coach position. This is my recommendation that you should hire Tim Cluess as the new Hofstra Men's Basketball Coach.

Mr. Cluess is a fellow Hofstra Alum, and as you know, is the current head coach of C.W. Post University. He also played at St John's before transferring to Hofstra and finishing his degree work there. After college, he was an assistant at a couple of high schools before taking the head coach position at St Mary's High School in Manhasset.

In his fifteen seasons at St Mary's, Cluess amassed a 264-78 record with three New York State titles, two Federation Championships and won the Nassau-Suffolk Catholic League Championships eight years in a row. During that time at St Mary's, he had over 50 players who went on to collegiate and professional playing careers, including Danny Green, formerly of North Carolina, who is now playing for the Cleveland Cavaliers.

After leaving St Mary's, Cluess became the head coach of Suffolk Community College. In his one season at Suffolk, he took them to the Region XV Championship and a fourth place finish in the NJCAA Division III Championship. It was the team's first appearance ever in that national tournament.

I have talked to several Hofstra season ticket holders in the past several days. To a person, each of them said that the team under Coach Pecora was "boring" and "predictable" on offense. I can tell you and those ticket holders that Coach Cluess' teams are anything but boring and predictable on offense. 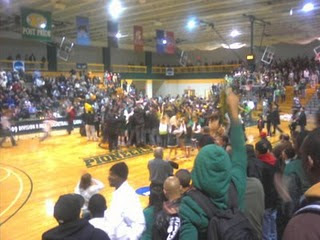 He runs a wonderful uptempo spread offense and he runs a pressure style defense with lots of traps. I attended several of the C.W. Post games throughout the past two seasons, including their exciting Eastern Regional Championship win over Bentley last season. And I can tell you and my fellow Hofstra fans, that without a shadow of a doubt they will love his style of play. And in fact, there are many Hofstra fans on CAAZone who support the hiring of Cluess as well.

As for his ability to recruit, Cluess has a long standing history with Long Island AAU coaches. In fact in an article written last year, Cluess said the following.

“I think one of the main reason’s why we’ve been successful at the places I’ve coached at,” he said, “is because of all the basketball people in Long Island that I’ve met and the connections with the area coaches, and I’m lucky, because we really have some outstanding high school and AAU coaches in the area.”

At C.W. Post, where you have to often rely heavily on transfers, Cluess brought in Division I transfers like Kevin Spann and Nick Carter. And he helped recruit one of C.W. Post's greatest players in Jonathan Schmidt, who graduated last season. In fact, in a Newsday article from over a year ago, Steven Marcus wrote the following

"Tim Cluess is so omnipresent in Long Island basketball that he had a hand in recruiting a player for C.W. Post even before he started coaching the team. Jonathan Schmidt, who turned out to be one of the best players in Post history, becomes yet another case of Cluess' Midas touch in mining basketball gold." 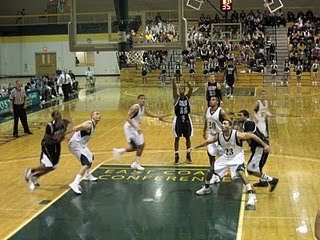 Cluess actually noted Schmidt to then Post assistant Tom Sheehan, a former assistant of Cluess at St Mary's. It's further proof that not only can Cluess coach, but he can recruit as well. And if you think he can only just recruit in Long Island, I know for a fact that he has ties to New York City basketball programs as well.

Now I know you are seriously looking at current Hofstra Associate Head Coach Van Macon. Coach Macon has done a nice job as a recruiter and has definitely helped bring in talent to Hofstra. But unlike his predecessor Tom Pecora, Macon has never been a head coach at any level (Pecora was the head coach at Farmingdale for three seasons prior to being head coach at Hofstra).

Also, I read Steven Marcus' "Analysis" in today's newsday titled "Hey Hofstra, make it Macon". I plan to write a followup article on my site later this week detailing some of the troubling statements made in that supposed "analysis".

However, I will note that you should take some of that "analysis" with a grain of salt and refer to the aforementioned article also written by Marcus that Cluess has a "midas touch" when it comes to recruiting. Despite what Marcus says, Pecora will not be able to "freeze out anyone else looking for recruits in his territory." If that was the case, then how did George Mason get the very talented Ryan Pearson from Far Rockaway?

Now I know you are also looking at former head coaches Dave Leitao and Tom Herrion, who currently is the Associate Head Coach at Pittsburgh as well as current Stony Brook head coach Steve Pikiell. They are all fine coaches, but will they look at Hofstra as the ultimate destination, or just a stepping stone to another position?

In Leitao's case, I hate to say it, but Leitao's career similarly parallels to a current CAA coach, Pat Kennedy. Kennedy was successful in several spots such as Iona and Florida State before his failure at DePaul and has not been successful at all since in his tenure at Towson.

In fact, Leitao replaced Kennedy at DePaul. Leitao was successful in his three seasons at DePaul but not so successful at his next stop, Virginia, where he was fired after four seasons. There is also a question of whether Leitao can recruit in the New York area.

As for Herrion, you need to ask yourself "Will he stay long if he is successful?" Since he did have a somewhat successful tenure at College of Charleston (80-38 with one NIT bid in four seasons), he might have visions of a larger job down the road, especially since he has been a long time head assistant at Pitt. Likewise for Pikiell, a former UConn assistant.

In Cluess, you have someone who has been on Long Island his entire life. In fact, he had offers to interview for different Division I jobs, but he chose to remain on Long Island. In fact one of his requirements for the Post position was to have his two kids sit behind the bench.

Mr. Hayes, you would have a coach that would probably stay at Hofstra as long as he was successful. And he will be successful if given the opportunity. His long standing track record absolutely proves that.

Finally, you have to ask yourself, do you want to be status quo as Marcus' online article headline "Marcus' analysis: For continuity's sake, Hofstra should promote Macon" suggests? In the past four seasons, Hofstra has not gone past the quarterfinals of the CAA Tournament. In the nine seasons that Pecora coached at Hofstra, the Pride only made it to the semifinals of the CAA Tournament three times.

Also, in the two past seasons in CAA conference play, Hofstra has had an over .50o record in conference play. However upon closer look, during that span Hofstra's record against CAA teams that were above .500 in conference was 6-16. Hofstra went 19-15 this season but only won two games against teams with a record above .500 - Fairfield and Northeastern. Is that the continuity you want?

Also, based on Sunday's Newsday article "Hofstra's AD Downplays concerns", there are several Hofstra alums who are concerned about the future of the basketball program. This is due to the loss of Pecora and the elimination of the football program all within the span of several months.

Mr Hayes, you can answers those concerns by taking Hofstra some of the money that is no longer being spent on Hofstra Football and put it into the Men's Basketball program. Increasing the funding for the basketball program could bring a significant amount of publicity to the school should the program be successful. Kyle Whelliston succinctly states this in his article "Xavier, It's a Basketball School, Dammit"

"Step one: drop football -- I know it's painful, and there's a lot of man-pride involved. Step two: spend a third of your athletic budget on men's basketball. As schools like Butler and have known for years, and as Saint Mary's and Northern Iowa are learning this week, there is no better form of advertising than being good at basketball. And for the cost of one 30-second Super Bowl ad in 2010 ($3 million), a Sweet 16 school can have two weeks of national advertising. Hours upon hours on CBS and ESPN, feature stories in the New York Times and Sports Illustrated, endless chatter in restaurants and cafes. In a time of collapsing pyramids and bad money chasing after worse money, this is an investment that's too true to be good."

Hofstra administration has already done the first step, ending the football program. Now take step two. And if you really think about it, Mr. Hayes, Kyle is correct. Besides eliminating football, what were the last two major occasions where Hofstra received major publicity such as the above? One was the Presidential Debate that Hofstra hosted in October, 2008. And two, was due to the men's basketball program in 2006. That was of course when Hofstra basketball was in the news in due to both the Tony Skinn low blow punch to Loren Stokes during the CAA Tournament (which ended up being an item on PTI) and the NCAA's low blow punch to Hofstra by snubbing it out of the NCAA Tournament (despite sweeping George Mason during the season).

You can accomplish this Mr. Hayes by first increasing the recruiting budget so that coaches can recruit nationally for talent that might be elsewhere than New York City. Look at all the talent that Butler and Cornell had this season. You mean to tell me that Ryan Wittman wouldn't have been interested in playing at Hofstra if given the chance (he would have been a freshman during the last season of Stokes/Agudio and Rivera).

But more importantly you can make a statement to the Hofstra "Contributors", the Pride Club Members and the loyal season ticket holders by hiring Tim Cluess. You will be making a dual statement that you are increasing the basketball budget to increase the talent level and hiring a proven winner to take this program to the next level. And with Cluess being a lifelong Long Island resident and Hofstra Alum, you will also be making a third statement that Hofstra is making a long term investment in its basketball program and future.

Increasing the budget is easy. The other choice is much harder. But the choice is yours, Mr. Hayes. Please make the right one. Make it Tim Cluess.

PS - I have also created a Facebook Group in support of Tim Cluess for Hofstra Men's Basketball Coach. You can find it here.
Posted by Unknown at 8:57 PM