Iona is Missing Its Pep 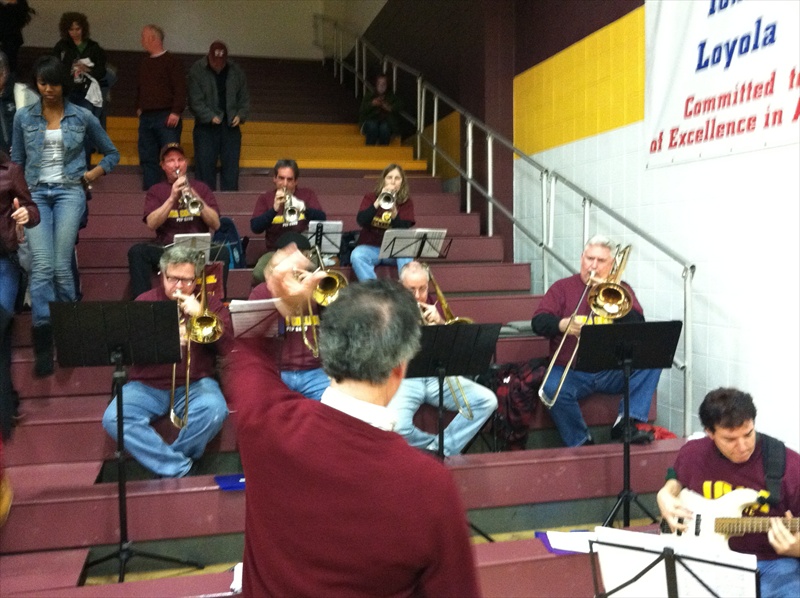 If you are one of my marines, aka, the few, the proud, the readers of my site, you know of my love of college pep bands.  There is nothing better than a good college pep band at a basketball game.  It sure beats canned music.  I remember going to LaSalle to see Hofstra face the Explorers in the 2005-06 season.   The LaSalle Pep Band played the entire night.  There was no canned music played over the PA system, just the pep band.  It was awesome.

Over the years, I have talked about my fondness for the VCU Peppas and the George Mason Pep Band, two of the best college bands there are in college basketball.  But one of my favorite bands in particular is the Iona Pep Band, which were a staple at Iona men's home games for years.

In many of my College Hardwood recaps of Iona games over the years, I have devoted many a paragraph to the Iona Pep Band (just do a search of "Iona Pep Band" on my site).  My favorite recap that involved the Iona Pep Band was the game from 2012 where Iona used a 31-0 run to defeat St Peter's 98-61.  The pep band was so killing it that day, I stated the following;


As Matthew and I made our way out of the Hynes Center for perhaps the last time this season, I wondered two things.  One, I thought about whether Iona could not only win the MAAC Championship but also make a run to the Sweet Sixteen this season.  Second, I wondered if the Iona Pep Band hires themselves out to play at parties.


That's how good the Iona Pep Band is (the picture is from that St Peter's game).  I would hire them to play at a party (alas they have to travel to Columbia, South Carolina now for the party).  I even recorded my own video of them above playing "Immigrant Song".   I just wish I had better audio on my iPhone.

What I love about the Iona Pep Band is that for such a small ten piece band, they have a rich sound.  The Iona Pep Band also has an old school, eclectic catalog.  They play anywhere from Led Zeppelin's  "Immigrant Song", to Earth Wind and Fire's "September" to Rick James' "Brickhouse" to the Black Eyed Peas "I Got a Feeling".

They are also fond of playing TV show  and movie themes, including "The Wild Wild West", "Peter Gunn", the James Bond theme song and my personal favorite, a very bouncy version of "I Dream of Jeannie".   Finally, they play the BEST DAMN VERSION of STEELY DAN'S PEG!  Period.

I even got to be Twitter friends with Walter Barrett, the trombone playing leader of the Iona Pep band,   From my friendship with him, I learned the band was hired by Iona, funded by alumni, since the school didn't have a pep band.  Walter had been part of the band for fifteen years.   The band was put together by the previous band leader of people he knew.  They offered students to help out, but over time it just became the regulars.  They are quite likely the oldest college pep band around, but they are also one of the best.

But something is missing this season for Iona.  The Pep Band.   I found out that the pep band was told that they were being replaced by a student band.   Now I can understand that, except for one thing.

It's one thing to tell the pep band to be replaced by a student band.   It's another thing not to have that student band ready.    So the Iona home crowd fans have to listen to canned music.  Canned music can be OK, depending on the person picking the songs. Often the canned music though is made up of  only the current popular hits on the radio and in some cases, like Wagner, the PA system is too loud.  To me, nothing beats a live band playing a unique, fun set, especially with a great brass section, like the Iona Pep Band.


So I have a request to the Iona administration, from a long time friend of the Iona women's and men's basketball programs.  Until your student band is ready to go, please, please, PLEASE bring back the Iona Pep Band.

Living 750 miles away now, I won't be able to hear them play live, but I would love for Jaden Daly to let me know via Twitter that Walt and the gang are playing my favorite songs.

So again, Iona Administration, bring back the Pep Band.  Do it for the Iona fans. Let them hear "Peg" again!