When a Season Ends...

Kyle Whelliston, founder of the now defunct Mid-Majority basketball website, always noted that except for one team, a team's season ends in a loss.   I always disagreed with that, with my philosophy being that a season just ends.  Where Kyle's philosophy seemingly was based in sorrow, my philosophy was based in closure. While for most teams a season does end in a loss, the end of a season also brings finality, reflection and often, warm memories.   Such was the case in our church league postseason tournament yesterday.

Our last regular season game was a makeup game at Trinity Episcopal Church on Monday.  We took a 20-15 halftime lead against a Shandon Methodist team and eventually won 39-26, our second regular season win of the season.   We entered yesterday's contest with a 2-6 record, but as noted previously, four of those six losses were where we had leads in the second half.    We were the #8 seed and we would have a rematch against Shandon Methodist, the #9 seed.  Both teams knew that the winner would play again an hour later vs. the #1 seed Epworth.

In that win over Shandon Methodist, coach Brad made an adjustment at half time.  We went to a box and one on defense, the one being whoever guarded  Shandon Methodist's #24 on offense.  He had scored twelve first half points.  In the second half, he scored two. It was the difference in the game.

Yesterday, Shandon Methodist's head coach made an adjustment.  He moved #24 from the wing to the post.  #24 scored two quick baskets, which was part of an 8-0 run to start the game.   We got our composure and rallied to cut the deficit to two, 12-10 at halftime.   In the second half, we continued our rally and took a 24-20 lead.  My older son Matthew contributed to that with a nice corner jumper for two points.   Shandon Methodist came back, scoring five straight points, taking the lead on a three pointer 25-24 with about a minute and a half left in the game.

We had two straight possessions with turnovers.  With time winding down, we forced a jump ball and the change of possession gave us the ball.  With a few seconds left, we worked the ball into the paint, where our center, Alex, took a jumper just inside the free throw line.  As he took the shot, he was fouled.   Alex had a chance to give us the lead with two free throws.  He calmly sank the first free throw.  When he got the ball back from the referee, he turned and looked at the scoreboard to make sure he at least tied the game and possibly to see how much time was left.  Perhaps it also took his mind briefly off the second free throw.  He went back to look at the goal and put up the second attempt.

We were up one, but we remembered all too well what happened the last time we were at North Trenholm Baptist, losing on that buzzer beater.  Shandon Methodist got the ball to their guard, #4, who had put up seven second half points and ten for the game. We surrounded him outside the three point line at their basket and they never got a shot off.  We won 26-25.

It was a very happy group of players.  We had an hour break.  Some players went to get something to eat nearby, while several of us stayed to watch the next game, which featured our friends' son Seavy and his #2 seeded Trinity team.  They would go out to a 19-5 lead early on, only to see First Presbyterian cut the deficit to six, 26-20 before Trinity ran away with the game.  Seavy made a nice play in the second half, stealing the ball in the corner, then driving all the way down the court for the layup.

After Trinity's convincing win, it was time for the rematch against undefeated Epworth.   They had dominated us in our second game of the season.  They outscored us in the first half 28-2. That was not a misprint.  Twenty eight to two.  We played better in the second half, losing the game 46-12.   Epworth was a very balanced team, with five or six solid players including our friends' son Shane, who is also an outstanding baseball player.   But #35 was their difference maker.  A tall, athletic, unselfish player with a terrific all around game.  His passing ability might be his best skill.

Epworth jumped out on us early and forced Brad to call time out.  We were playing well on defense but just were intimidated when on offense.  We weren't running our motion offense, perhaps due to #35 being in the paint.

After being on the bench the first game, I switched positions with our other assistant coach, Phil Betette, for the second game and did the scoring for both teams at the scorers' table, while Phil sat on the bench.  Mark, who I've known from playing in the baseball tournaments at NTBC, runs the basketball league.  He always mans the clock for the games.  As we held Epworth without a basket on one possession, Mark turned to me and said "That was really good defense".  And it was.

We finally settled in on offense.  The team scored on several possessions in a row and cut the deficit to four, 12-8.  After getting fouled on a drive to the basket, Matt sank two free throws to help get us there (Matt would hit one of his two free throw attempts in the second half to finish with three points).  Our team was motivated, our players' families were excited and we had made this a game.

Epworth clamped down on defense in the final few minutes and scored the final eight points of the half.   But the score was 20-8 at halftime, a far cry from the 28-2 drubbing we received the first time we played.   We were playing hard and the team knew it.

In the second half, we got within ten pretty quickly at 22-12.  But Epworth used their balance on offense.  All I know was that I was marking two's in seemingly every player's column on Epworth.  Still we fought and cut the deficit down to fourteen, 33-19 in the middle of the second half.   But we ran out of gas, having played our second game in the span of really an hour.   Epworth would score the final twelve points to win 45-19.

Still it was a good showing on our team's part.  We had won three of our last six games and it could have easily been five of our last six.   Outside of our first game of the season and the two games with Epworth, we were in the lead in the second half in every other game we played.  We did that with likely the youngest team in the league.  In a league with sixth and seventh graders, we had no seventh graders and several fifth graders who played up.   It was a good building block for next year. 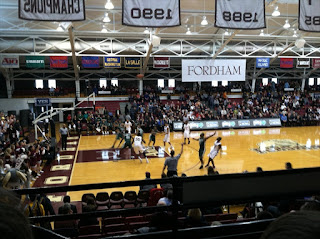 Five years ago, Matt and I spent Saturday, February 4, 2012 going to three basketball games in a row; Charlotte-Fordham, Georgia State-Hofstra, and Iona-Manhattan, as part of the Mid Majority's 800 games project.  As much fun as that day was, I'd like to think the two games we had yesterday as assistant coach and player were just as fun, if not more.

After he had hit his two free throws in the first half against Epworth, Matt came off the court in a substitution.  As I sat at the scorers' table, Matt came by me as headed to our bench.  I reached out my hand and he slapped it five.  It didn't matter at that time whether his season about to end in a win or a loss.   All that mattered to him was that he was playing well and that he was having fun.

What I will remember now that this season is over is that Matt grew as a player.  He now knows what a motion offense is, how to properly come off screens, how to set a pick and much more.  Matt's got a pretty nice shot and it shows in his free throw shooting.  He still has a lot to learn, especially about being aggressive with the ball.  But that will come given more experience.

As for me, as much as I thought I knew about round ball having covered college basketball for eleven plus years, I learned a lot in my first year as an assistant coach in youth league basketball.   There's still a lot more to learn.

After the games yesterday, we went home and Matt continued to play basketball outside.  I decided to go down to Trenholm Park and helped out in the Trenholm Little League coach pitch baseball evaluations.

When one season ends, another season begins...
Posted by Unknown at 5:18 PM No comments: