Cheesesteaks, Bungee Jumpers and Basketball (Recap of Hofstra vs. Drexel) 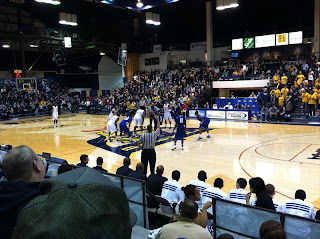 Life is like a group of weather forecasters.  You never know what you're going to get and apparently neither do they.  Based on the forecasts that I heard on Friday, travel to Philadelphia for yesterday's Hofstra- Drexel game was going to be hazardous with snow and rain. I even warned my son Matthew that he was likely to stay home with his mom and little brother due to the weather reports.

But I should have known better.  When I woke up yesterday morning and looked outside, there was barely any snow on the ground and the snow/rain was basically going to end in a couple of hours.  My friend Joe Suhoski, otherwise known as @VaBeachRep on Twitter, was going to be at the game, since he was covering it for CAAZone.  He noted that the precipitation had basically ended by him as he was making the trip up from Baltimore. 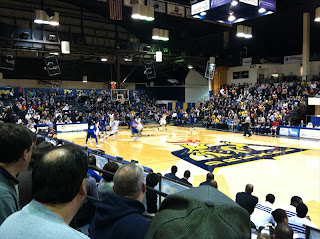 So, Matthew and I picked up our third member of the trip trifecta, Tieff, and headed down to Philly.  The roads were a little wet, but nowhere near the conditions the "weather forecasters" had predicted.  Our plan was to get to Philly by 1:00 PM, meet up with Joe for lunch to talk basketball, then head to the game at Drexel. 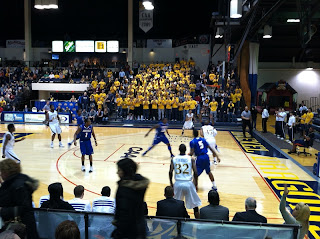 We got to Philly by 1:00 PM and parked right outside, Slainte, a restaurant that Tieff, our friend Mal and I went to last year when we were at the last Hofstra vs. Drexel basketball game in Philly.  Joe was waiting for us at the bar and we ended up getting a table/booth by the window.  Once side had a nice cushy couch/booth, the other side had tables.  Matthew and Tieff wanted the comfy chair, while Joe and I were fine sitting at regular chairs.


I already knew the Sliante menu, which is online, so I already knew my choice; philly cheesesteak with cheese whiz and a side caesar salad.  Tieff had his cheesesteak with provolone instead.  Joe had a chicken salad and my son had his standard plate of french fries.  We basically talked CAA hoops the rest of the time.  Joe, Tieff and I went over a lot of recent Colonial Athletic Association basketball history in that ninety minutes.  Matthew soaked it all in. 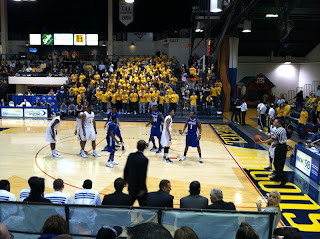 After a delicious lunch, Joe walked over to the DAC since his car was already parked there.  We drove and found a spot on the street across from the DAC and paid for three hours of time at the kiosk.  Then we took a short walk on a brisk day to the gym entrance.   We sat behind the Hofstra bench, which turned out to be close  to the Drexel Pep Band.  The pep band started out with "We Want the Funk" and it was a very good rendition. They were sharp all day.

Last season, I sat mid court at the DAC as the Pride knocked off the Dragons in the second conference game of the season for both teams.  At that time, you didn't know how good either team was at the time.  Both teams would finish in the top half of the CAA; Hofstra finished third, while Drexel finished fifth. 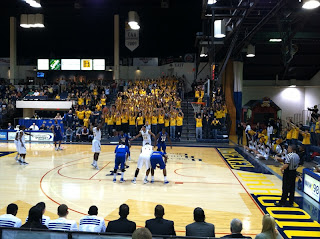 This season is a lot different.   Drexel came into the game tied for first with George Mason and VCU.  The Dragons have the tiebreaker on both teams, having defeated the Patriots and the Rams at the DAC (and they don't play either team again in the regular season).  Meanwhile, Hofstra has struggled with only two conference wins and came into the game tied for tenth in the CAA with William and Mary.

The game started out as a microcosm of the season.  Hofstra struggled to score from the field as Drexel's defense forced the Pride to use most of the shot clock on their possessions then have to settle for contested shots.  The Dragons jumped out to a 16-6 lead.

But despite their record, Hofstra has played hard all season and have not quit in any of their games.  The Pride responded with a 15-7 run and cut the deficit to the two, 23-21.   But Drexel would score nine of the last twelve points in the half and entered halftime with a 32-24 lead. 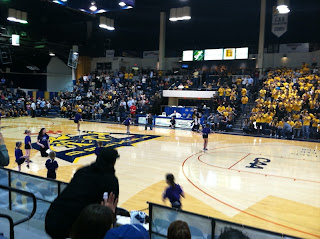 Then came the surprise of the day. It wasn't the surprise appearance by DefiantlyDutch and his better half, who originally weren't coming to Philly but yet, there they were sitting right next to us.   The surprise was a group of young kids, known as the Bucks County Bungee Jumpers, a jump rope team that came out as the halftime show.  Many of us didn't know what to expect.  But what we got was stunning.  These kids were incredibly talented as they showed off their various jump rope skills. 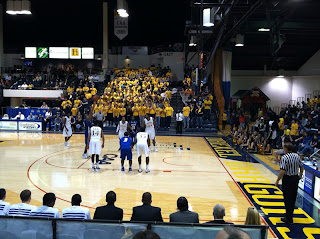 It was simply the best halftime show I had ever seen at a college basketball game.  They have a video on Youtube, which doesn't even do them justice. You can find them at this site.  Note to all the colleges in the Philadelphia metro area - You want these kids performing at halftime of your athletic events. They are awesome.


After they finished their show, the Bungee Jumpers were given a well deserved standing ovation from the crowd at the DAC.  I didn't think anything could top that halftime show.  But two players, Chris Fouch of Drexel and Nathaniel Lester of Hofstra, did their best to put on their own memorable second half performances. 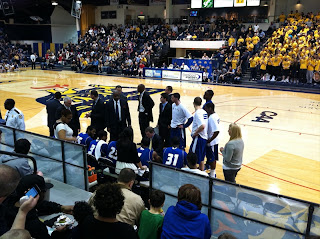 The Pride came out with a quick 8-2 spurt, to cut the lead to two, 34-32.  Lester was responsible for most of those points as he would for the rest of the second half.  He would score ten of Hofstra's first sixteen points in the second half.   But unfortunately for Lester and the Pride, a familiar thorn in their side, Fouch, would be equal to the task.

Earlier at lunch, the topic of Drexel came up and I talked with Joe about how Fouch had not been a real factor for the Dragons this season.  Until yesterday, that had been the case.  Fouch, who was the leading scorer for the Dragons last season, is fourth on the team in scoring this season coming into yesterday's game averaging 8.9 points per game, which is down six points from last season.  With the emergence of freshman Damion Lee, he is averaging seven less minutes per game than last season. 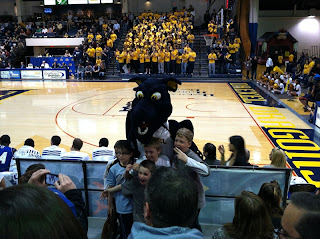 But Fouch has had a history of torching the Pride. Coming into the game yesterday, Fouch had averaged nearly sixteen points per game vs. Hofstra with eleven career three pointers. When he was a freshman, he burned the Pride for twenty nine points on six shots from beyond the arc, in a 75-62 win over Hofstra on January 23, 2010.

Fouch decided to channel that performance from two years ago in the second half and make me eat my lunchtime words.  He would score twenty of his twenty five points in the last twenty minutes of the game.  Fouch was six of seven from beyond the arc on the game.  He was a big part of Drexel's 10-0 run that made a two point game into a 44-32 lead.  Fouch also scored his 1000th career point in the second half and as fellow Hofstra fan Lee Warner put it, seemingly 936 of those points came against the Pride.

Drexel extended the lead even further to nineteen, 61-42.  But again, Hofstra refused to quit. Behind Lester and Mike Moore, who had eighteen points, the Pride went on a 10-0 run.  Lester probably had the best second half of his career.  He scored twenty two second half points. twenty seven overall and he had seven offensive rebounds on the game.  The Pride had cut the lead down to eight, 67-59. 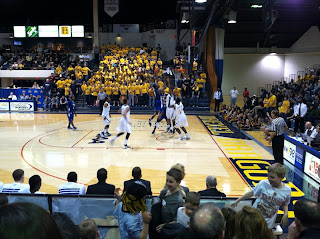 But Hofstra could get not get any closer.   Drexel would win 78-67.   The Dragons were truly fire breathing from the field as they shot nearly sixty percent in the game, including a blistering ten of seventeen from beyond the arc.  Frantz Massenat had twenty points, while Lee had fifteen.  That was the difference in the game; Drexel had three double digit scorers that combined for sixty points.  Hofstra had Moore and Lester who combined for forty five points, but were the only two double digit scorers on their team.

Since we had a two hour ride back to Long Island, we said our goodbyes to DefiantlyDutch and Joe and made our way back to the car. Sure enough, as we walked on Market Street, it was lightly raining. The rain turned to wet snow as we traveled across the Ben Franklin Bridge.  While we drove the entire way up the New Jersey Turnpike, it was coming down at a pretty good clip and made the drive a little more adventurous.  But the weather meteorlogists on WCBS AM and WINS AM seemingly had no clues of this.  They only talked about possible flurries in the area.

Just another surprise in a day full of surprises.