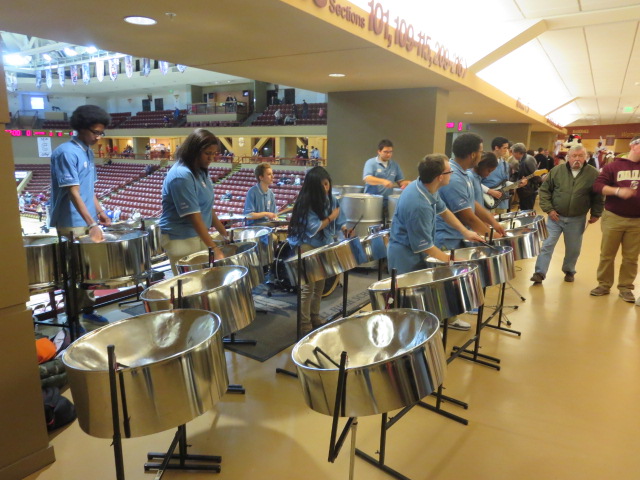 Over the past nearly ten years that I have been writing about college basketball, one term occasionally is thrown about, especially in #CAAHoops circles; the term "rockfight".   The term was started by several CAA bloggers and fans, often to denote Drexel basketball.   Rockfight in CAA circles is often a low scoring, often bad shooting knock em down, drag out, physical affair.  There are lots of fouls, but not a lot of points. Basically the kind of game Drexel and Bruiser Flint seemingly loved to play over the years.  The wrestling announcer Jim Ross would call such a game "a slobberknocker". 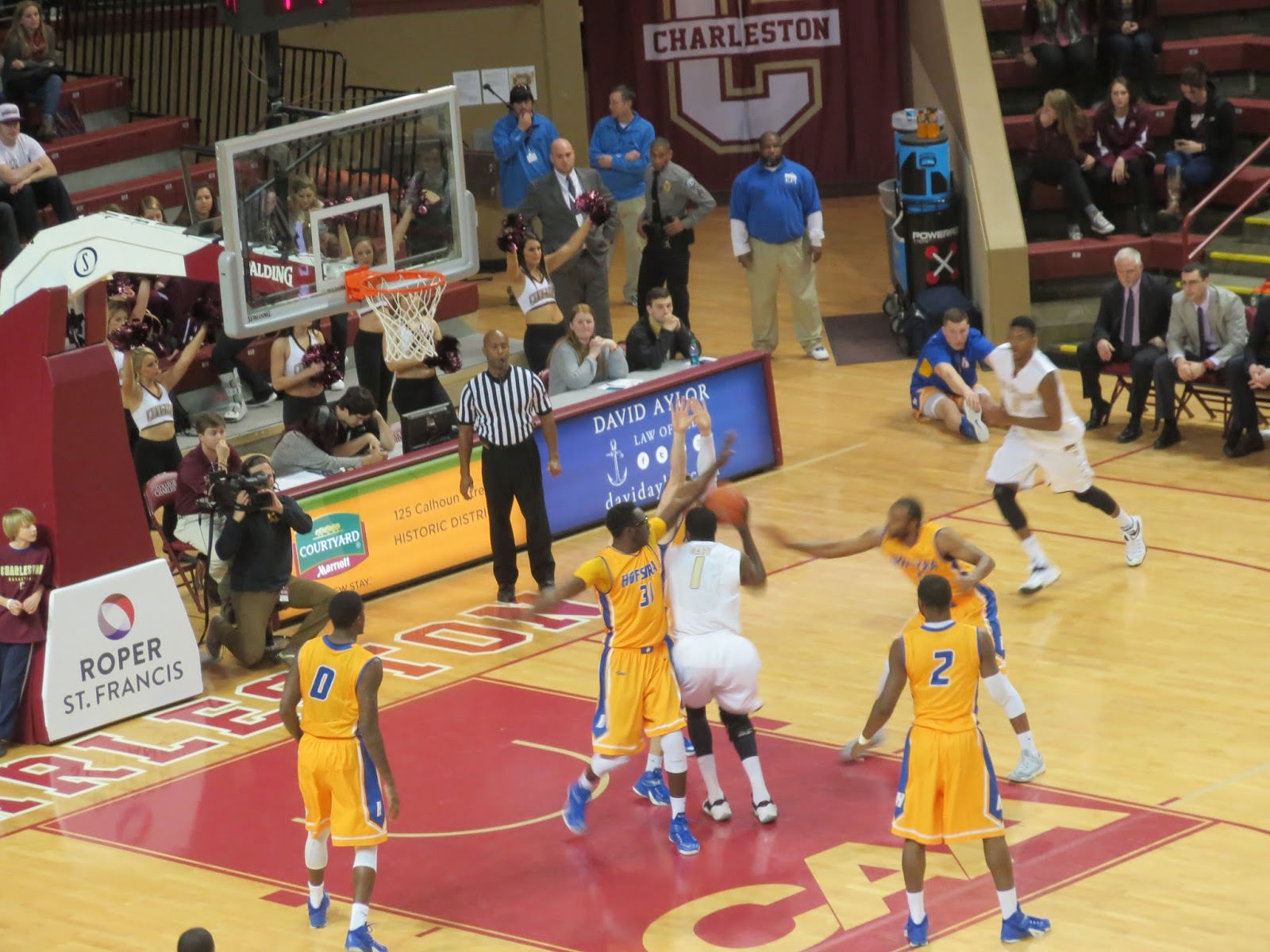 It was nice to be back at TD Arena in one of my favorite cities in the United States and only two hours from where I live in Columbia.  And there's nothing better than a good high school steel drum band, which greeted us in the concourse of the arena.

The game started out slowly from an offensive standpoint.  Neither team was shooting well and the score after eight minutes of play was 8-4 Hofstra.  After nine and a half minutes it was 11-4.  Then in the span of seventy five seconds, CofC scored nearly doubled their point total with a 7-0 run to tie the game at eleven on a Canyon Barry three pointer. 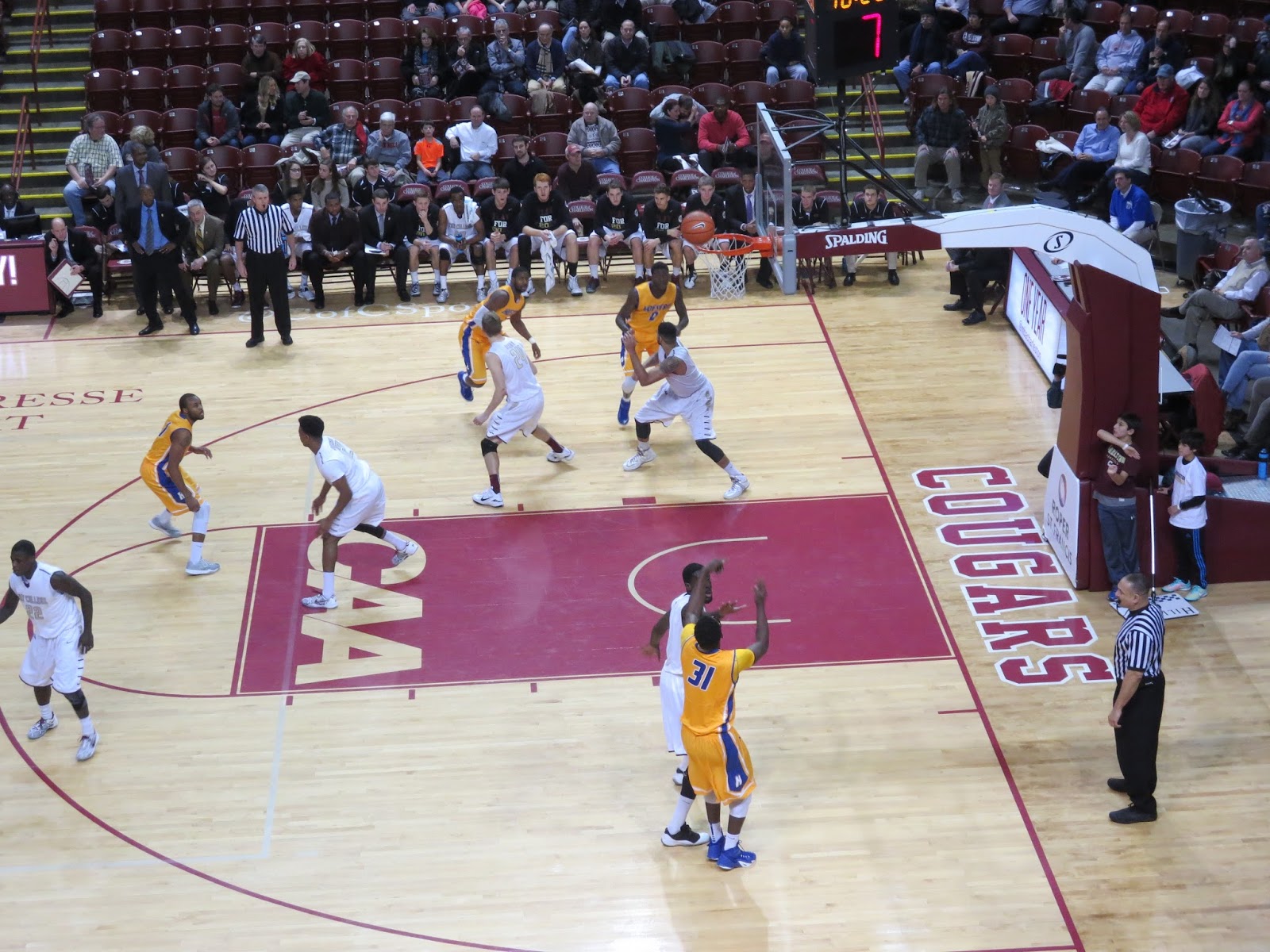 This was due in large part to the physical play on the court.   There were several non calls on Hofstra which made the CofC fans irate.  When a foul was finally called on Hofstra, there was a huge howl from the crowd, basically as a sigh of relief from the previous officiating of the game. 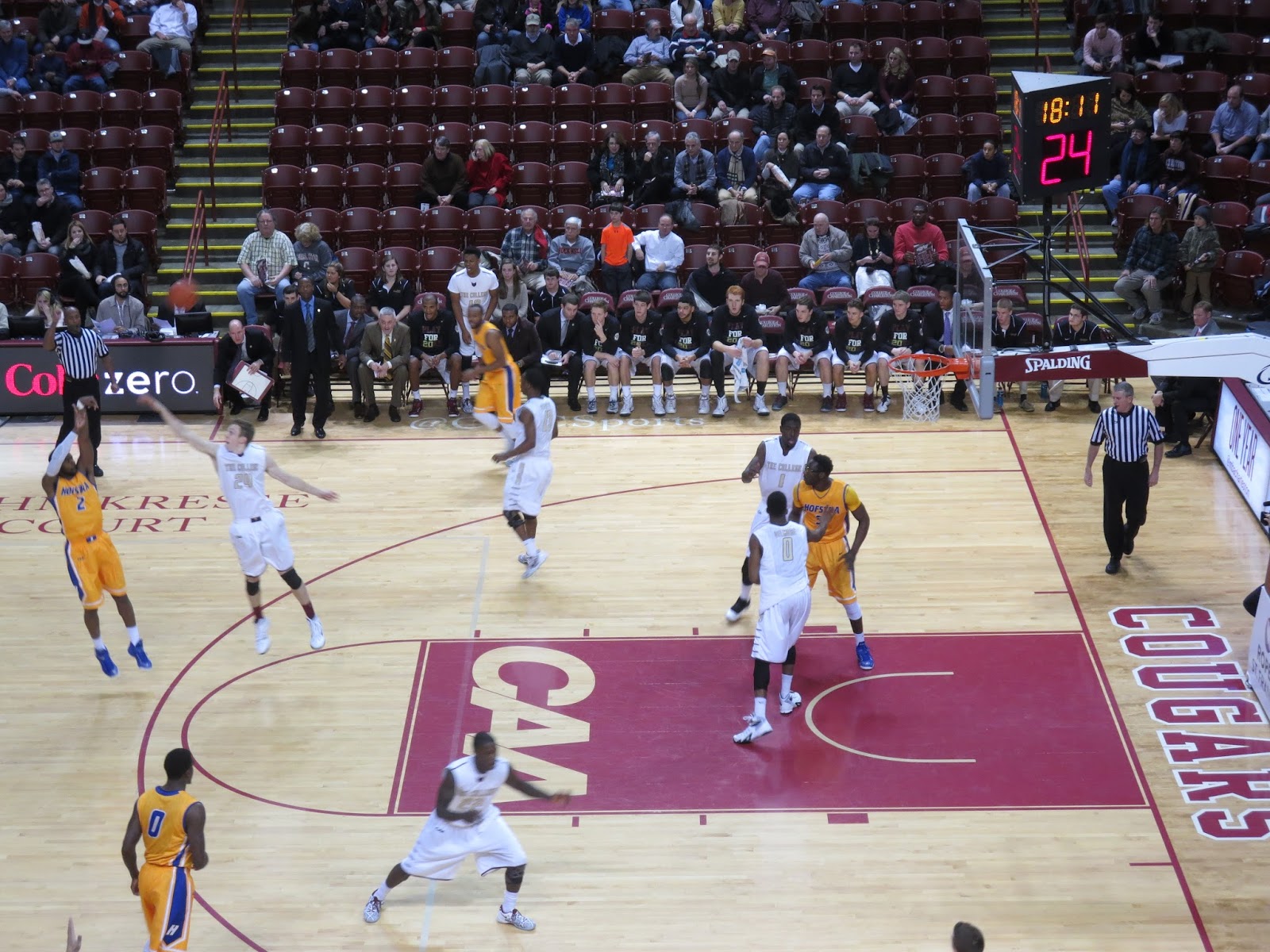 The pace would pick up over those final six minutes and The Pride would enter halftime up 28-24.  At the beginning of the halftime, the public address announcer noted that if Charleston wins a game by scoring 71 or more points, the fans would be treated to a meal deal at a local restaurant.   In this case, that would mean the Cougars would have to basically double their output in the first half, an unlikely event given their shooting percentage. 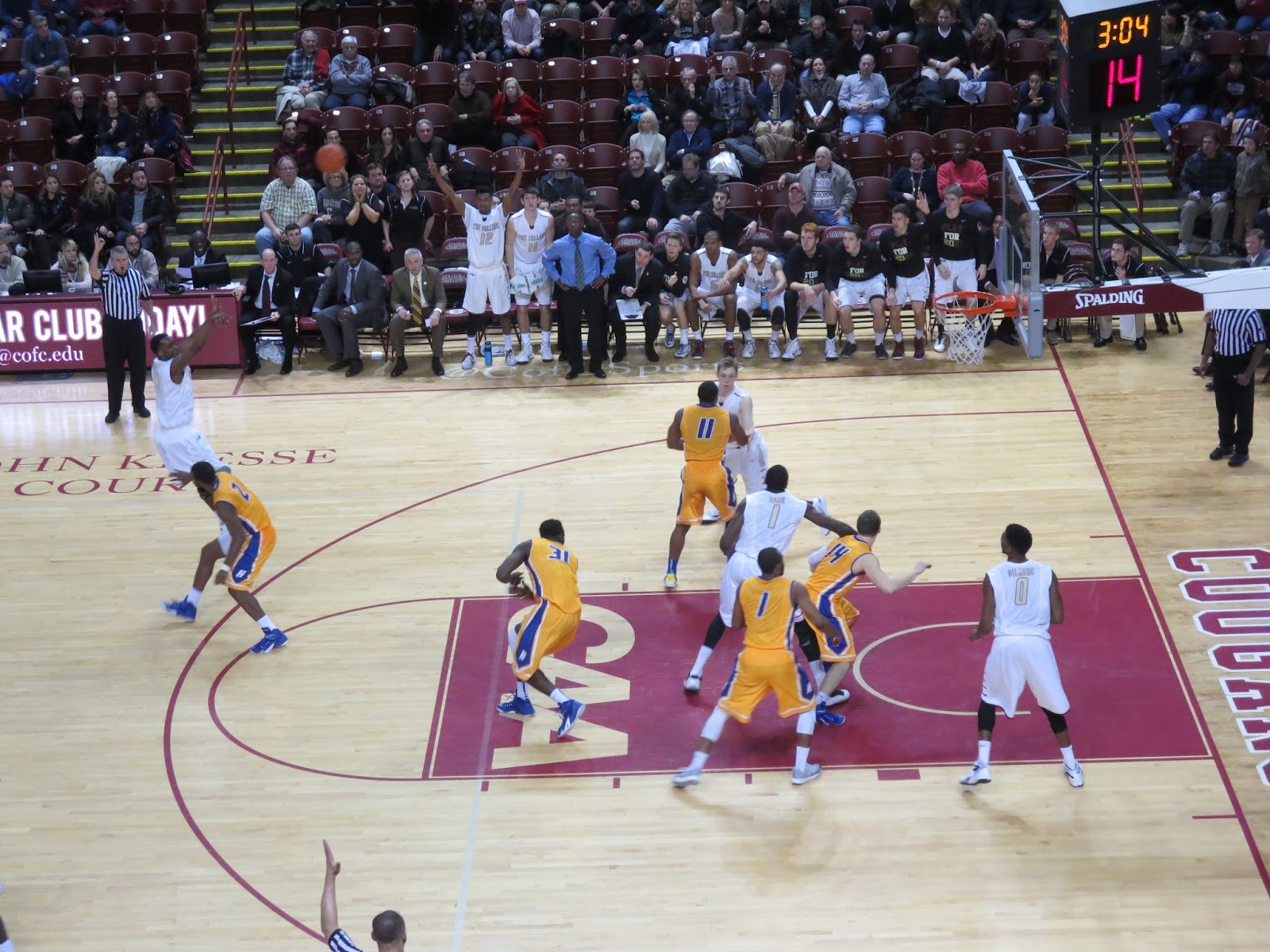 Ameen Tanksley started the second half, doing what he does best, burying a three pointer to put the Pride up seven, 31-24.  But the Cougars came to life and as a result, so did the crowd.  CofC outscored Hofstra 13-5 over the next six and a half minutes.  Anthony Stitt's jumper put the Cougars up 37-36 and the CofC fans in attendance made the most noise they had all night. After a Green free throw tied the game at thirty seven, Baru hit a jumper to put the Cougars up two 39-37.

The Pride responded with a 12-3 spurt of their own, scoring all their points on three pointers. , Green and Dion Nesmith each hit one, then Tanksley hit two in a row.  His second three pointer put Hofstra up 49-42 with a little under nine minutes left.  It looked like the Pride were hitting their stride shooting wise. 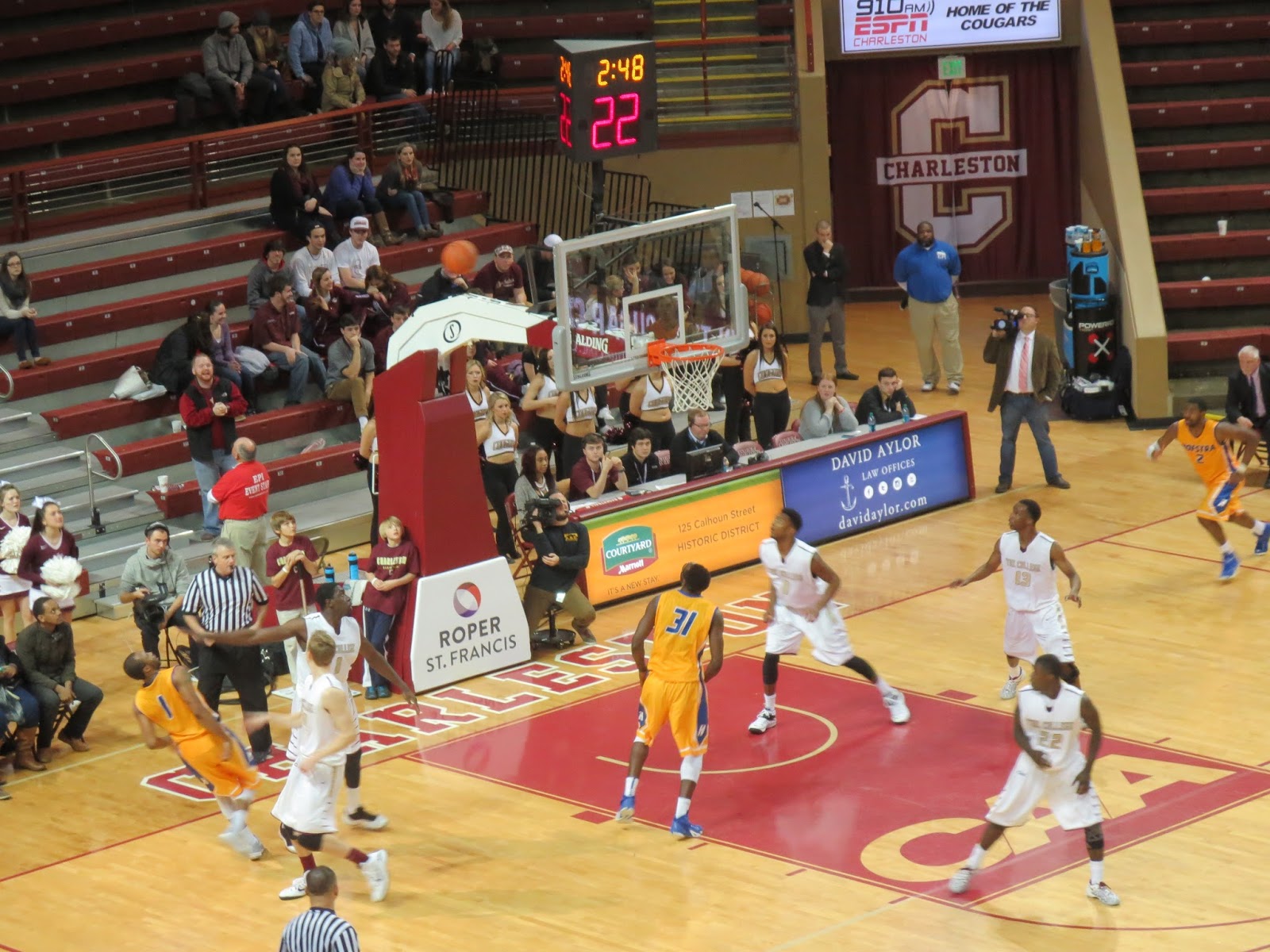 However, the Cougars had another run in them.   They outscored Hofstra 13-3 over the span of four minutes.  Barry again did a good part of the damage.   His three pointer tied the game at fifty two.  Then Cameron Johnson banked in a three to put the CofC up 55-52 with 4:51 left and the John Kresse Court was the loudest it had been all night.

For the first thirty five minutes of the game, the Pride had struggled from the line.  They had shot eleven of nineteen going into those last four minutes and fifty one seconds of the game. 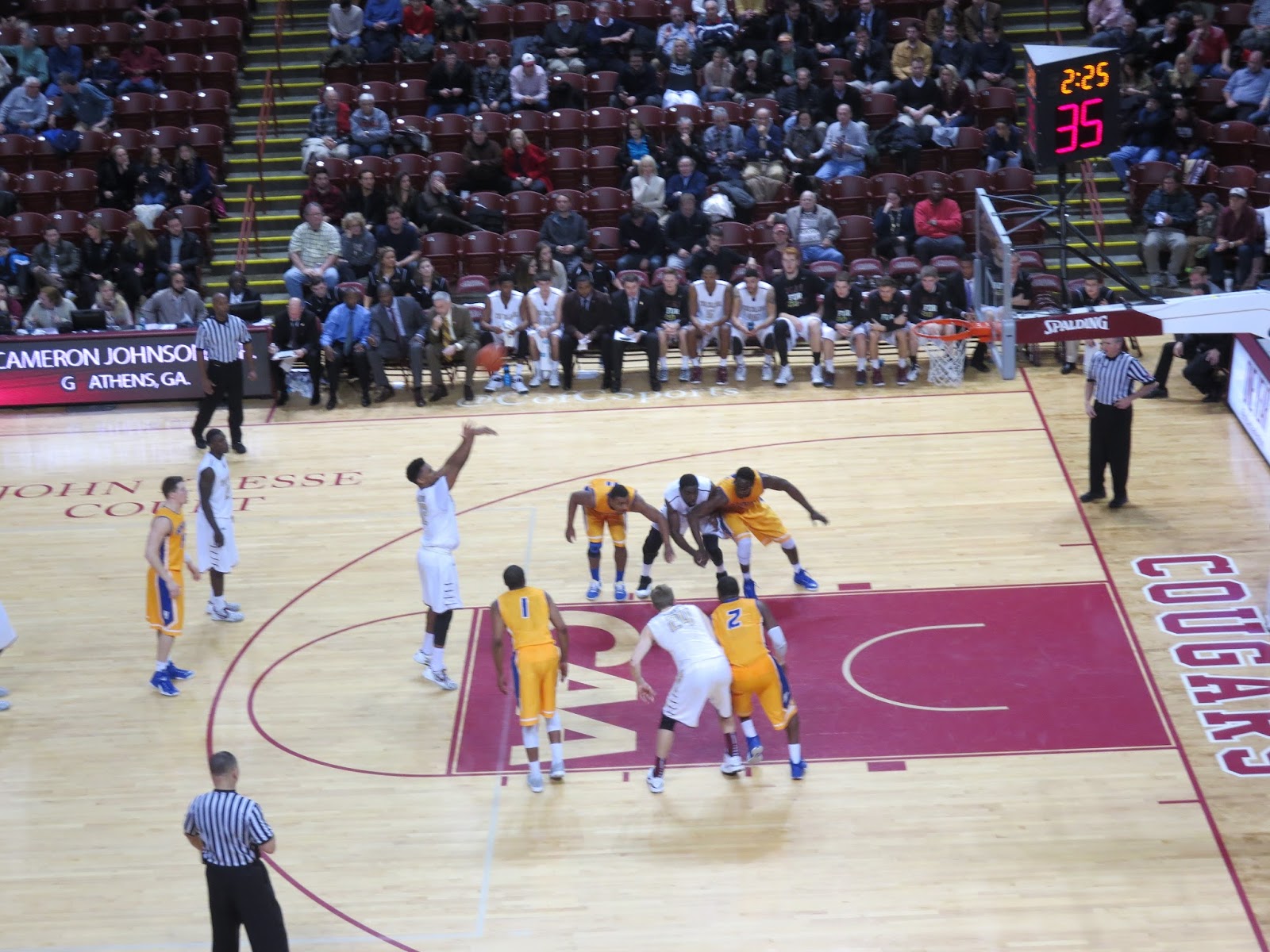 Then a strange thing happened.  Brian Bernardi was fouled on a three point attempt.  He calmly sank all three free throws to tie the game at fifty five.  After Donovan Gilmore put the Cougars back up with two free throws, Green tied the game for Hofstra again, making both of his free throws, which made it five three throws in a row for Hofstra.  Green would come up huge again, hitting a jumper to put Hofstra up 59-57 with 2:48 left.

While Hofstra had troubles from the charity stripe for most the game, CofC had been very good, shooting 11 of 13 from the line.  But down the stretch, the Cougars charity stripe shooting failed them.  Johnson first had a chance to tie the game, but only made one of two free throws to cut the lead to one, 59-58.  Then after a terrific drive and layup by Dion Nesmith put the Pride up three, 61-58 with a little over a minute left, Adjehi Baru had a chance to cut the lead to one.  He missed one of two free throws as well. 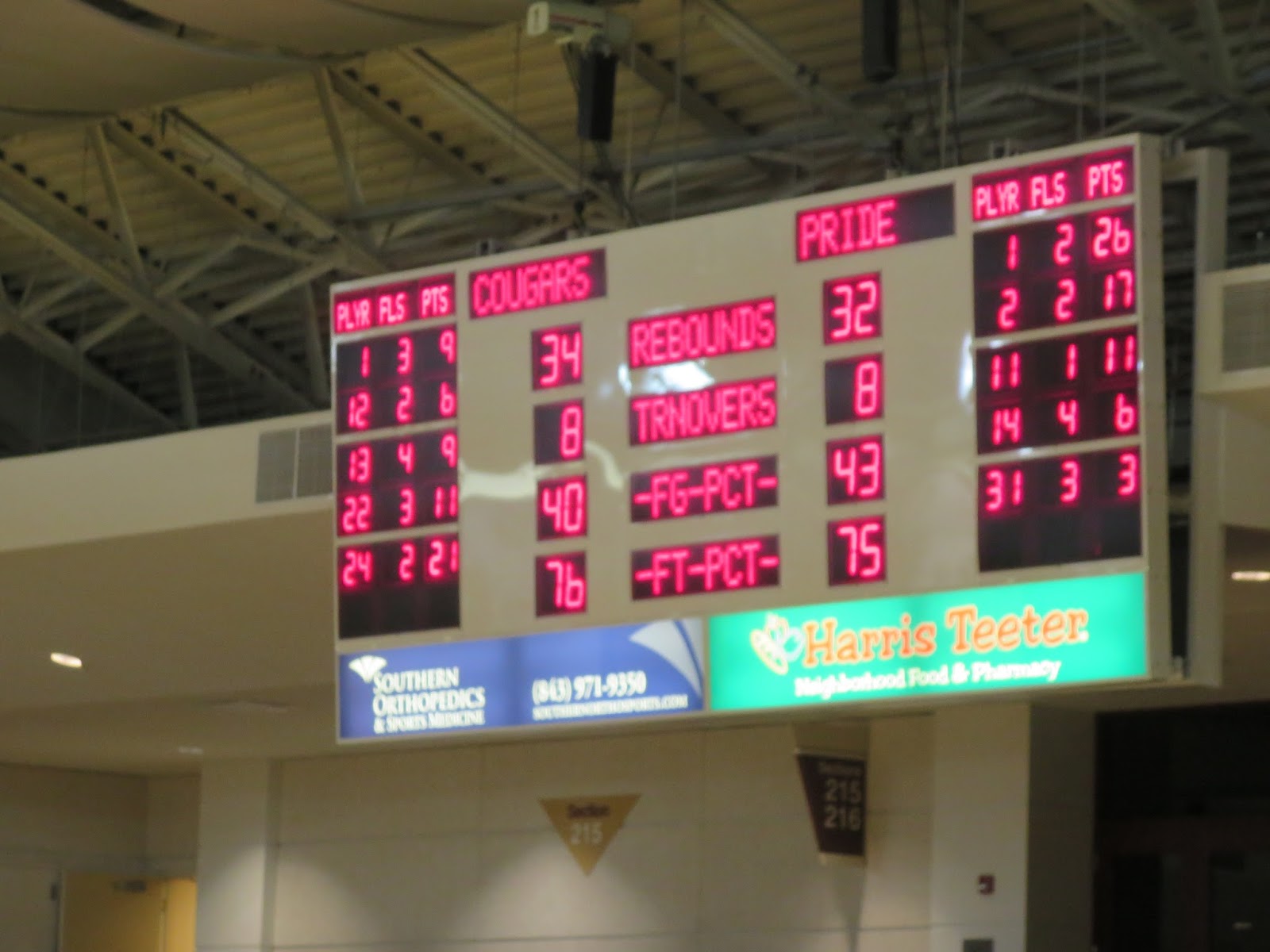 The Cougars were down two, 61-59 with thirty eight seconds left and had to foul the rest of the game.  But Green and Nesmith were huge down the stretch, hitting all eight of their free throws.  Mix in a great pass from Nesmith to Moussa Kone for a thunderous dunk and Hofstra escaped with the 71-66 win.

After both teams combined for fifty two points in the first half, each team scored over forty points in the second half.  Go figure.  Still, the Pride had more fouls, twenty, than baskets, nineteen.  For CofC, it was close. Twenty two baskets to twenty one fouls. 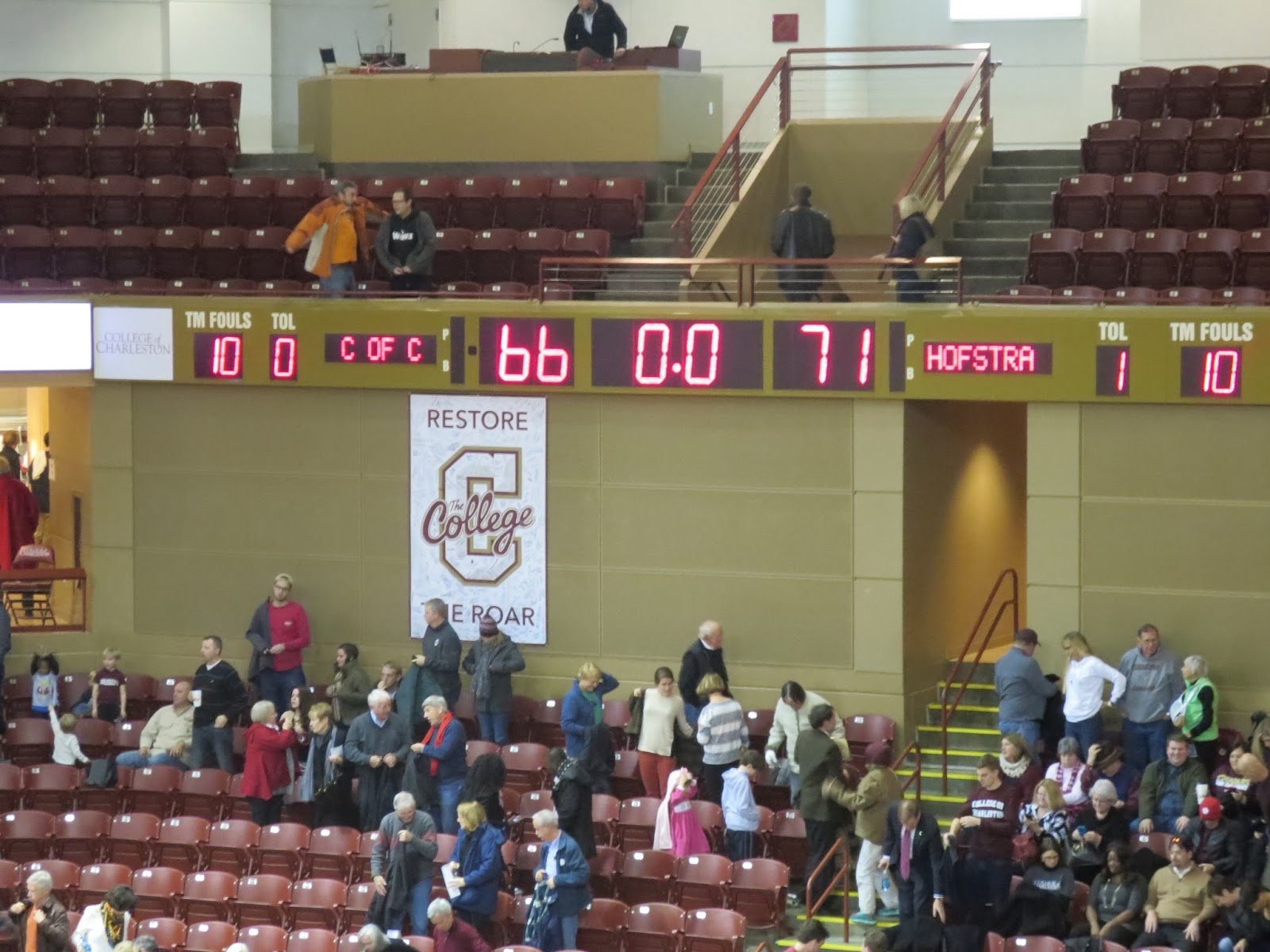 Green had another stat stuffer game with 26 points, 5 rebounds and 4 assists.  Green shot 13 of 14 from the charity stripe.  Tanksley added 17 points and Nesmith had 11 points off the bench for the Pride.  Hofstra went 13 for 13 from the line over the last 4:22 of the game.

Barry led the Cougars with 21 points , 7 rebounds and 3 steals.  He showed a nice all around game as he drove the basket often on Bernardi, who had a hard time covering him. Stitt added 11 points.

On a night where William and Mary and James Madison suffered their first conference defeats, Hofstra managed to squeak out a road win.  The road is often unkind to #CAAHoops teams.  When you get a win after a "rockfight" on your opponents' floor in the Colonial, the bus ride afterwards is a lot sweeter.

There must have been a lot of smiling faces on the Pride players as they headed to Elon for their next game on Saturday.