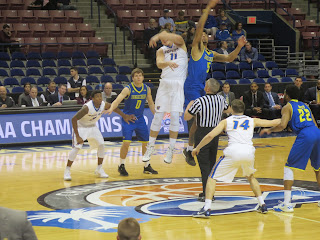 I can tell you that parking was a breeze, perhaps partly due to three northern CAA teams playing in Charleston on a Friday night.   But I can also tell you, the North Charleston Coliseum is a much better venue than the Richmond Coliseum, home to the CAA Tournament for years.  It was nice not to have to wear two sweatshirts at my seat for a CAA Tournament game. 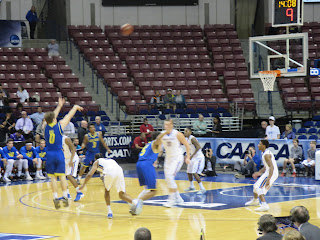 Going into last night's two CAA Tournament Play In Games, you had two teams, Hofstra and James Madison, who had swept their respective opponents, Delaware and Drexel.  Even though the seeds were relatively close, it stood to reason that the tournament games would play to regular season form.

But that's what makes college basketball conference tournament play so special; the unexpected.   There's a reason why it's called "March Madness".  And we got that last night in front of what was a sparse crowd of 1889 on what's known to CAAHoops fans as "Pillow Fight Friday". 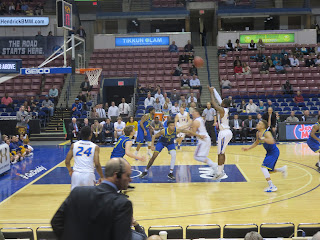 In the first game, #8 Hofstra took on #9 Delaware.  The Pride had won both games against the Blue Hens, but both were close games; two points at the BOB (the Bob Carpenter Center) and eight points at David Mack Arena.  Neither game was particularly high scoring.  Hofstra won the first game 58-56 and won the second game 73-65.  We should have known we were in for a different style game.

The Pride wasted no time taking an early 6-0 lead thanks to good ball movement, a couple of nice outlet passes by Rokas Gustys and two drained threes by Deron Powers and Eli Pemberton.  The Blue Hens would answer with eight straight points, a three pointer by Ryan Daly, an old fashioned three point play by Darian Bryant off an assist from Daly and a layup by Daly.    Daly shredded Hofstra with seventeen first half points. 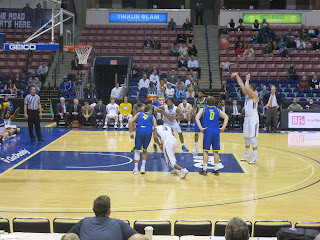 Both teams would have no problem scoring as Hofstra took a 26-25 lead at the under eight media timeout,   The kicker was Hofstra's leading scorer, Justin Wright-Foreman had been held scoreless for the first thirteen and half minutes of the game.  After the Blue Hens took a 27-26 lead, Wright-Foreman would awaken with a vengeance, as two of his threes started a 12-2 run and the Pride would take a 39-29 lead.    The score would eventually be 47-39 Hofstra at the half.

Hofstra would answer regain the lead twice, the latest on a Deron Powers jumper that put the Pride up 72-71 with 4:24 left.  But that man Daly, who had twenty seven points and eleven rebounds on the night, would give the Blue Hens back the lead on a jumper.  A Daly free throw on a later possession would give Delaware a 74-72 lead.   Gustys would be fouled while hitting a layup to tie the game at 74 with 2:38 left.  But Gustys would miss the potential go ahead foul shot and the game would remained tied.  From there, Delaware outscored Hofstra 7-2 the rest of the way.  Hofstra had a chance to tie on a three point attempt by Powers with nine seconds left, but it was short.  Delaware had pulled off the comeback, winning 81-76.  Delaware now plays #1 seed UNCW at noon today. 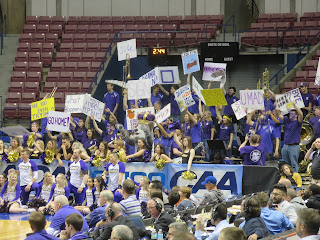 In the second game,  #7 James Madison took on #10 Drexel.  It was as if both teams decided that they had seen enough offense in the first game and they wanted to kick it #CAAHoops old school, with the Dragons playing Bruiser Flint Drexel and James Madison playing a Ron Hunter led Georgia State squad in a seemingly low scoring affair. 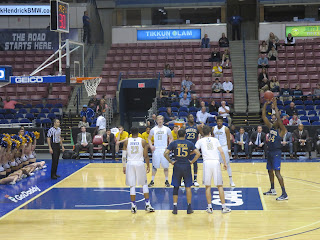 James Madison finally scored some points and at the under eight media, it was 19-10 Drexel.   The Dukes made a run and cut the deficit to two points, 25-23 on a jumper by Joey McLean.  Then after an offensive foul on Ramone Snowden, JMU coach Louis Rowe lost it and received a double technical foul.  Rowe was ejected from the game and suspended for the team's next game (which, spoiler alert, will be later today).   Drexel's Kari Jonsson would hit all four technical free throws to give Drexel a 29-23 lead.  Eventually, the Dragons would go up eight, 33-25 at the half.

So here we had our second eight point halftime lead of the night.   And just like the first game, the lead would disappear quickly.   Perhaps Coach Rowe should get ejected more often, because JMU came out like a house on fire after halftime.   The Dukes would go on an incredible 32-7 run over the first nine minutes of the second half, moving the ball around quickly and burying shot after shot, as the Dukes got balanced scoring.   James Madison nearly shot as well as Delaware did over the last twenty minutes of their game, shooting sixty two percent from the field. 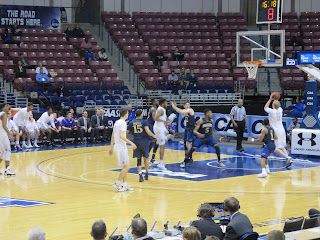 After scoring only two points in the first eight and half minutes of the game, the Dukes scored SEVENTY EIGHT points over the final thirty one and a half minutes to win the game 80-70.  Five JMU players scored in double figures, led by Jackson Kent's twenty points. With the win, JMU plays College of Charleston at 6;00 PM today.

Two eight point halftime leads went up in smoke thanks to strong second half shooting.   Proof that once again, no lead is safe in March.

Certainly not in the CAA.
Posted by Unknown at 1:43 AM