Back to the Future - Philly 70's Style

When Hofstra - Villanova was scheduled earlier this year, Hofstra fans, myself included, thought this was a neutral site game.  I even wrote on Wednesday about "Wright Comes Home", about how Jay Wright was coming back to the Long Island area,  with a team of his playing at the NYCB Live at Nassau Veterans Memorial Coliseum again after seventeen years.

Well Wright did come home...or came to a home game.   Turns out last night's FS1 nationally televised game was a Villanova "home game" due to a $60 million renovation on Villanova's home court, Finneran Pavilion.   Problem was that the "home game" was played in Uniondale, literally right across the street from the road team's school, Hofstra. 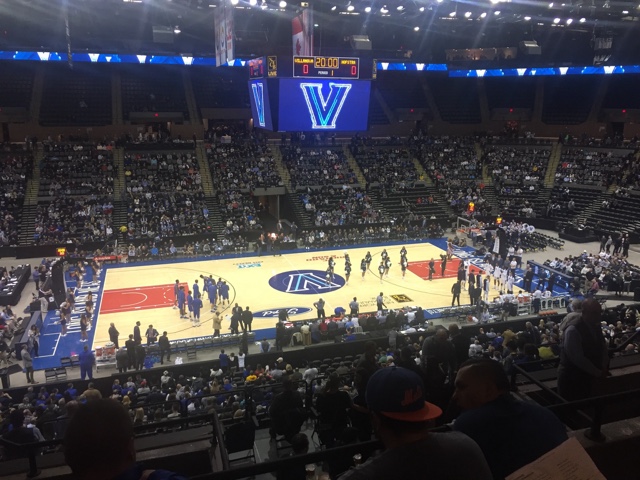 After having dinner with my good friends Tieff and Mal, along with my older son, aka my color analyst Matthew at Houlihan's on Merrick Avenue in Westbury, we took the five minute drive over to the Coliseum.  When we got out of the car and made the walk to the front entrance of the Coliseum, we were struck by something fifteen minutes prior to the game starting time - Really long lines to enter the building.   Turns out that they had just opened the gates a few minutes prior to us getting there.

As Hofstra fate would have it, we literally ran into Jerry Beach's MUCH better half, Michelle, and their very cute daughter Molly.  Molly also happens to be really awesome, because she busts her dad's chops all the time (Keep it up Molly!). As we chatted, we noticed the line we were on was really slow.   Mal first made the move over to end of the next line and within a minute caught up to us.   So we made the move over and got in to the building before many people that we were behind in our original line.

That right there should have told me that we were in for a surreal night. 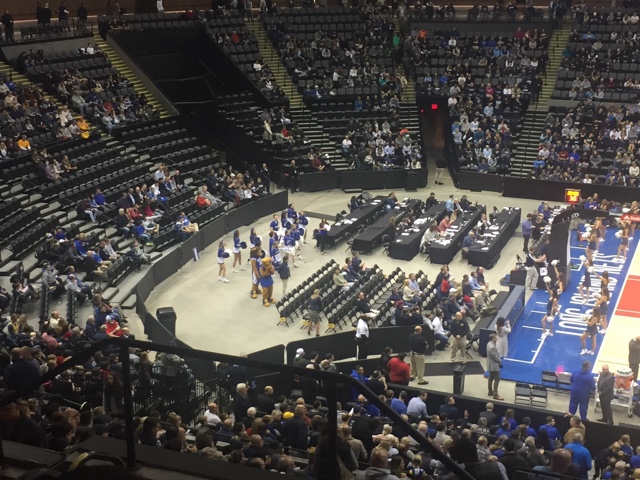 We just got into our section in time for the national anthem.  Then we took our seats in Section 224, Row 6, along with many other Hofstra fans.  It made sense since I got the tickets through Hofstra.  I would see long time Hofstra faithful friends Geoff Sorensen and Joe Geyer as Hofstra was first announced as the visiting team.   Tieff made a quick reference to the location of the Hofstra cheerleaders, who were basically banished with the mascots Kate and Willy way behind the press box behind the Hofstra basket.   Then Villanova was introduced to the majority of Nova fans.   The announced attendance of 7,892 was probably 80-20 Nova fans. 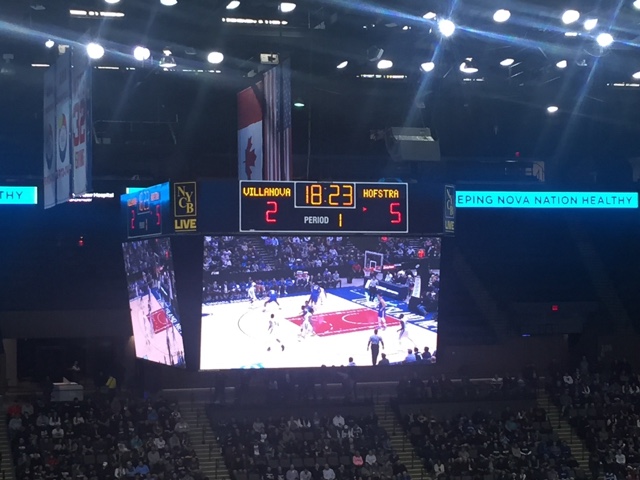 Hofstra started out strong early as who else, Justin Wright-Foreman, scored several baskets and the Pride actually had a 9-7 lead four and a half minutes into the game.  The Pride were only down one , 17-16, with a little less than twelve and a half minutes remaining in the first half when the Wildcats went on a 12-0 run to go up 29-16. and never looked back the rest of the game.  The Hofstra guards,  Eli Pemberton in particular,  struggled with Nova's zone trap at mid court.  Hofstra committed fifteen turnovers as opposed to Nova's seven on the game. 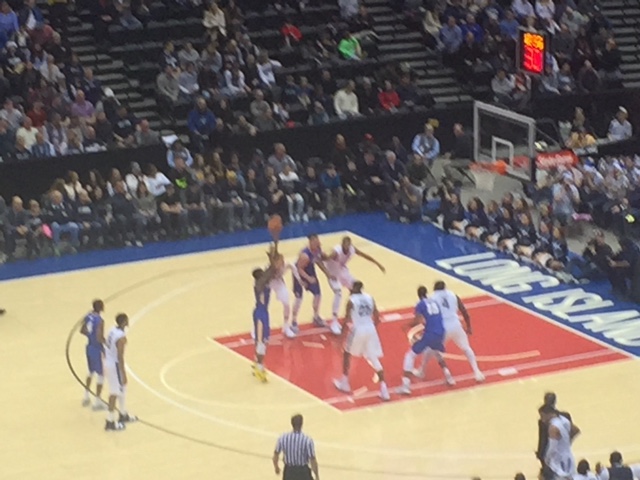 As for the "home team's arena", in August 2015, Forest City Enterprises, run by Bruce Ratner,  renovated the Nassau Coliseum for $89 million.  The renovation included a new metal facade,  renovation of the interior and reduction of capacity to 13,000 seats. 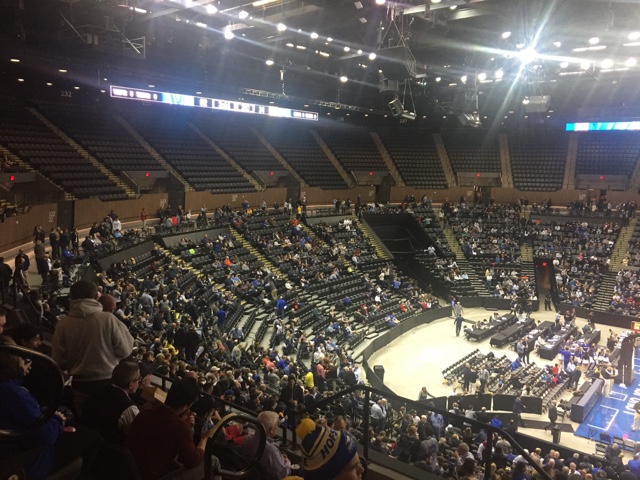 Let me tell you something...it was not $89 million well spent.   The front facade looks like an alien ship landed in a parking lot in Uniondale.  Inside, I don't know what was more 70's retro, the faux wood paneling in front of the seating sections or the primitive scoreboard.  And they did nothing on the biggest issue with Nassau Coliseum over the years, the lack of space in the concourse aisle way.   All that was missing was Garry Howatt, J.P. Parise, Eddie Westfall and Gerry Hart to come out suited up in the Islanders' uniforms (Google their names).
No wonder New York State has approved a new arena for the New York Islanders, who are unhappy with their "home" at Barclays Center in Brooklyn, another Bruce Ratner run building, at the Belmont Park site.

Here's a suggestion for New York State officials for the new Belmont Park arena - Do not give the bid to Forest City Enterprises. 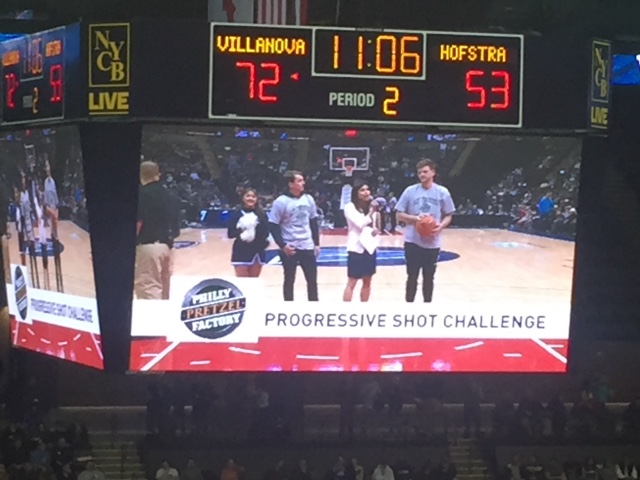 Back to the game.  During the media timeouts, the media replays were run by NBC 3 Sports Philly.  One media timeout promotion was run by the "Philly Pretzel Factory".  Given all that and the Coliseum's 70's retro look, all that was missing was Sly Stallone with a gray sweatshirt and we would be in Philadelphia circa 1976. 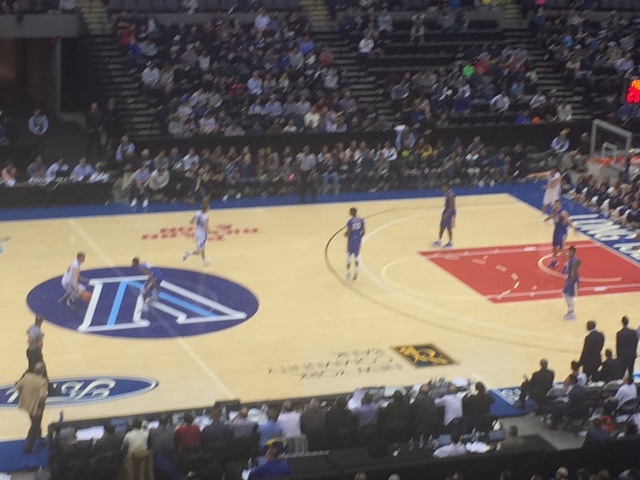 One play epitomized the game for Hofstra.   With about eight seconds left in the first half, Hofstra messed up the inbounds pass and eventually turned the ball over with about 1.8 seconds left in the half.  Jay Wright called timeout to call a play.   It turned out to be a long three pointer by Phil Booth as the buzzer sounded.   Nova was up 52-31 at the half. 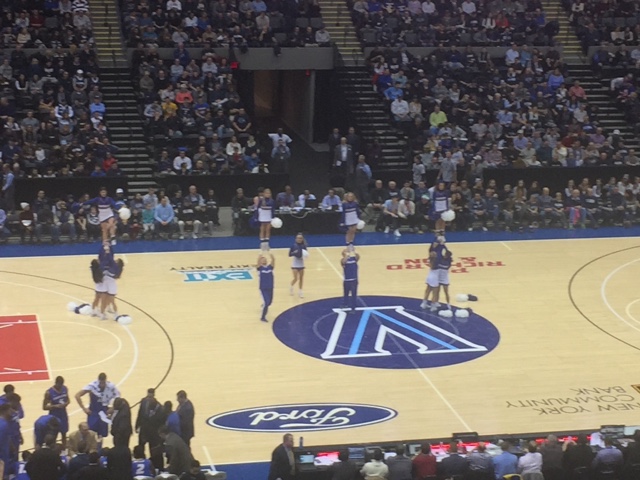 In the second half, Hofstra made a concerted effort to beat the trap and get the ball on the block to their bigs Rokas Gustys and later Hunter Sabety.   It was successful in that Hofstra outscored Villanova 36-28 in the paint.   But the deficit was too big to overcome and the Wildcats were just too efficient on offense. Despite both teams shooting forty eight percent for the game, Nova had thirteen more shot attempts, making six more field goals.   The Wildcats were amazing from beyond three, shooting 16 of 34 from beyond the arc to Hofstra only shooting 5 of 16 from three. All that was left was Nova clearing it's bench and bringing in "The GPA Team" as Tieff called it.  Nova would win 95-71 in convincing fashion.  Nova had five players in double figures, led by Mikal Bridges with twenty points and freshman Omari Spellman's double double of nineteen points and ten rebounds.   Here's the scary thing about #1 Nova - None of their top six players in minutes played last night are a senior.  If no one leaves the team early for the NBA draft, they will all be back next season.
For Hofstra, they actually played really well, despite the twenty four point loss.   They shot the ball well on offense and held their own on the rebounding end.   Nova was just too efficient on offense. Had they played this well Wednesday they would not have lost to Manhattan.  Wright-Foreman had a terrific game with twenty five points on 9 of 18 shooting.  He more than held his own against an elite team.   Gustys narrowly missed a double double with eleven points and eight rebounds. Despite having seven points under his sixteen points per game season average and seven points, Pemberton had five assists and Kenny Wormley had five assists as well.
All in all it was a fun night, but a suggestion for Hofstra for next time if they play Villanova.   Make it a neutral site game and play it at MSG, not in East Philadelphia, aka Uniondale.   The Nassau Veterans Memorial Coliseum needs to be like the 1970's.  A distant memory.
Posted by Unknown at 9:33 AM