Villanova Head Coach Jay Wright is returning to home, well his former home on Long Island, when he brings in his #1 Wildcats to face his former team the Hofstra Flying Dutchmen.  OK, Hofstra is now the Pride, but they were still the Flying Dutchmen when Wright was the head coach.

Jay Wright started his basketball career playing alongside Carson Puriefoy Sr. at Bucknell (Carson Puriefoy Jr, Carson's son, was the star guard for the 2015-16 Stony Brook team that went 26-7 and went to the NCAA Tournament). After his playing career was over, Wright became an assistant coach at D3 University of Rochester, which he followed up as an assistant coach at another #CAAHoops school, Drexel University.  Then in 1987, he became an assistant for Rollie  at Villanova until 1992. Massimino then took the UNLV head coaching job in 1992 when Jerry Tarkanian was forced to resign.  Wright followed him there for two years.

In 1994, Wright became the head coach of Hofstra, a school that had just joined the America East Conference, having moved from some conference that only Jerry Beach, aka Defiantly Dutch seems to know about.  The Flying Dutchmen had not been to a NCAA Tournament since they made two straight NCAA Tournaments in that supposed East Coast Conference in 1976 and 1977 under Coach Roger Gaeckler and star players Richie Laurel and John Irving, each of whom were later drafted by the NBA.

The first two seasons under Wright, 1994-95 and 1995-96, were a struggle for the then Flying Dutchmen, as they won only five conference games each season.  Then in the 1996-97 season, Hofstra improved to a 9-9 conference record and in Wright's fourth season, the Flying Dutchmen would have their first winning record in years, going 19-12 and 11-7 in the America East in the 1997-98 season.   Those first four seasons were merely "Vincent's Shellfish Tower" at Little Vincent's Clam Bar in Carle Place compared to the main dishes in store the next three seasons.

The 2000 America East Championship Game was played at Hofstra's brand new David S. Mack Sports and Exhibition Complex, aka "The Mack", aka "Hofstra Arena".  It had just opened in January 2000, replacing the Physical Fitness Center as the home for Hofstra Men's and Women's Basketball,  among other sports.

I remember the game well because I was in a hotel bar in Washington D.C watching the game on ESPN, sneaking out of a conference I was attending.  Led by America East Tournament MVP  Speedy Claxton, Hofstra downed Delaware 74-69 to win the America East Championship and an automatic berth in the NCAA Tournament.  Along with the win, there were three other memorable moments.   The first one was seeing the start of the broadcast show the "Delaware Fightin Blue Hens vs. Hofstra Flying Dutchmen" on the screen.  Talk about two distinct team mascots.   Another memorable moment was when the bartender asked me "Where is Hofstra?" Then I had to explain where Hofstra was on Long Island, much to a somewhat confused bartender.  Finally, seeing the Hofstra fans storm the court after winning the game, it made me determined.  The next year, I am going to be at the America East Championship Game.

Hofstra would eventually lose to Oklahoma State in the first round of the 2000 NCAA Tournament.   Claxton was drafted in the first round of the 2000 NBA draft by the Philadelphia 76ers.  But Wright and the rest of the now Hofstra Pride, as they changed their name to April of 2000 would return to defend their championship with "Grandma's Sunday Sauce", their best season yet.   The Pride would just miss out on winning their third straight ECAC Holiday Festival, losing a heartbreaker to Penn State in the championship game.  After that, led by eventual NBA player Norman Richardson and now NBA assistant coach Jason Hernandez,  the Pride dominated the America East again, going 16-2 again and once again playing Delaware at The Mack for the championship game.

This time I was present with my friends Tieff and Mal to see  Hofstra down Delaware 68-54 in front of a sold out crowd, completing a trifecta of double digit wins in the America East Tournament.   What was most impressive was the Pride's defense under Wright, forcing Delaware to use the entire shot clock on many of the Blue Hens' possessions.  In fact, Hofstra held Delaware scoreless the final three minutes and forty six seconds of the game.  Impressive. 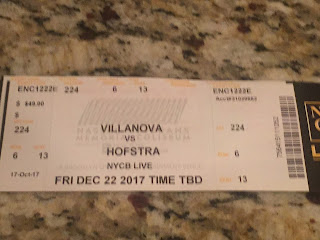 Hofstra's reward was a #13 seed in the 2001 Tournament as the Pride took on Steve Lavin's UCLA Bruins.  The Pride were up 33-29 at the half before the Bruins came back to win 61-48.  It culminated a three season stretch that saw Hofstra post a 72-22 overall record, which included a 46-8 regular season record in the America East.

Little did anyone know that it would be the last appearance Hofstra has made in a NCAA Tournament.

Then the job at Villanova became available.  Wright took the job and Wright's longtime friend and assistant coach, Tom Pecora took over at Hofstra, as the Pride would leave the friendly northeast confines of the America East for the very Virginia based Colonial Athletic Association (and thus Beach's hashtag #SouthernBias came about).

Wright's first three seasons at Nova resulted in three straight NIT bids for the Wildcats.  In his fourth season, the 2004-05 season, Wright's team broke through, making the NCAA Tournament and reaching the Sweet Sixteen.   At that same time, Hofstra under Pecora would make it's first of three straight NIT berths.  The Cats would make the Elite Eight in 2005-06, the same season Hofstra was snubbed from the NCAA Tournament.   Eventually, Wright would bring Nova to the Final Four in the 2008-09 season.  Seven years later, Wright would break through the glass ceiling, as the Wildcats won the NCAA National Championship in a thrilling 77-74 game at the buzzer on a Kris Jenkins three pointer.

Since leaving Hofstra, Jay Wright has won three hundred and ninety six games and have made the NCAA Tournament twelve out of the past thirteen seasons.  His Wildcats have been the cat's meow in the Big East the past four seasons, accumulating a ridiculous 63-9 record in Big East play.

Meanwhile, Hofstra is going on its fourth head coach.  They have only made CAA two conference tournament finals with one regular season championship.  #SouthernBias has not been hospitable to the Pride, neither was the NCAA Tournament Committee back in 2006.   It's been sixteen years since Hofstra went to the big dance.

Friday, Jay Wright comes back home to the Island, when the Wildcats play Hofstra at the newly renovated Nassau Veterans Memorial Coliseum.  The last time Hofstra played a Big East team in the Nassau Coliseum was ironically under Jay Wright in the 2000-01 season.  The Pride "stunned" St John's 86-80.   For me the stunning moment is that Jerry Beach's all time favorite German center, Lars Grubler, played twenty eight minutes in the game. 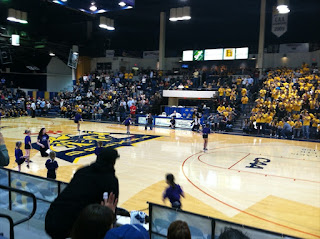 It was the first win ever by Hofstra against St John's.  Before that win, the Pride had lost nineteen straight to the Red Storm.  His Villanova team is now first in the national rankings.  As Beach also noted on Twitter, it's also the first time that an active NCAA Tournament winning head coach has faced his previous employer with the head coach's team being ranked #1.

Yes, Jay Wright is from Bucks County, Pennsylvania.  Bucks County is also home to the terrific Bungee Jumpers, one of the best halftime performance groups I have ever seen.   And Villanova is right in his backyard.   But Hofstra is where Wright first cut his teeth as a head coach.  To longtime Flying Dutchmen fans, Hofstra will always be home for Jay Wright.

Wright's not the only one going home Friday night. It turns out I will be back in New York visiting family and friends for the holidays.   You know where I will be, Wright?