For Hofstra, The Time Is Now 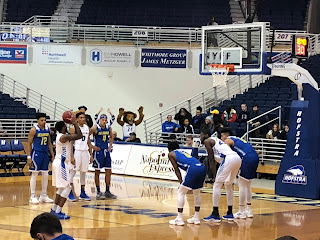 It's been going on eighteen years since Hofstra Men's Basketball last made the NCAA Tournament.  The Pride moved from the America East to the CAA right after winning their second America East Championship in a row.    They would find the Colonial Athletic Association a much more difficult conference to make their mark in.


Hofstra has had very few significant chances to make the NCAA Tournament since moving to the Colonial.  Twice they lost in the CAAHoops Tournament Finals, both times to UNCW.  In 2006, after knocking off  George Mason in the semifinals, the Pride's late second half championship game rally fell short, losing 78-67 to the Seahawks.  The Pride thought they would get an at large NCAA bid.  But they would be snubbed out of the tournament, settle for a NIT bid and would have to watch George Mason make it to the Final Four that year.

Ten years later, after having a double digit lead for a good part of the game, Hofstra saw UNCW rally to take a lead late in the second half of the championship game.  Hofstra would respond and force overtime.  But the Seahawks would then eventually break a tie with 1:26 left in overtime and win the game 80-73.  Again the Pride would have to settle for a NIT Bid, their fifth in their history. 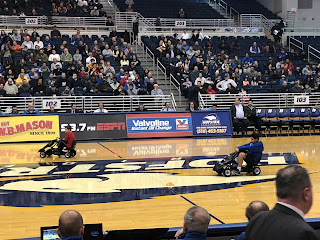 When I moved down south nearly six and a half years ago, I kept two of my four Hofstra Basketball season ticket seats.  This allowed my friends Tony, aka Tieff, and Mal to continue seeing the Pride play at The Mack.   I still follow the Pride pretty religiously, watching the Hofstra home games via their online stream site.   Occasionally when the Pride is in the region to play and time has allowed it, I've been able to see the Pride at Appalachian State, Elon, and Charleston, where I got to see a Hofstra win and a good steel drum band.   Finally, when the CAA Tournament wisely moved down to North Charleston in 2017 (sorry folks, but there have been more fans at CAA Tournament games in Charleston than Baltimore), I got to see the Pride lose a first round Pillow Fight game to Delaware.

During the Christmas holidays, my family travels back up to Long Island to see family and friends.   This allows me to go to a Hofstra game (and even other college basketball games when the schedule allows), see old friends there and relive all the fun I had over eleven years of regular home games at The Mack.  This holiday break was no exception as it allowed my color analyst, aka my older son Matthew and me to see the Pride play an old America East rival, the Fighting Blue Hens of Delaware the last Friday night in December in Hempstead. 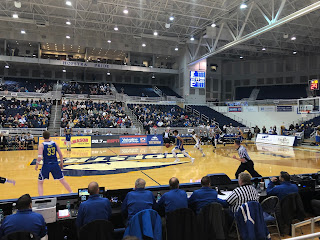 After starting the season 3-3, the Pride were in the midst of a seven game win streak and offered up premium game tickets for $7.77.  I went online, got two tickets and we went to The Mack.

May I digress for a minute? 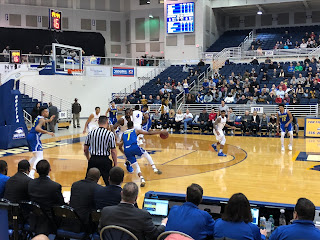 As much as I like watching basketball games in the Colonial Life Arena and I have very good season ticket seats for the women's team, there is nothing like having great season tickets in a 5000 seat mid major arena of your alma mater.    And for eleven years, it wasn't just having terrific seats often watching a lot of good games (and I saw my share when the Pride were in their 2004-2007 heyday).  It was also seeing all your friends, sharing laughs and funny comments.

It wasn't just a game at The Mack, it was a night on the town, an experience.  That's what made the Hofstra games even more special.  I greatly miss that.

After saying hi to some long time Hofstra folks, we went to our seats, which was in the same section and not far from my season tickets, section 111, Row D.  I immediately found out that two longtime friends that I knew when they were Hofstra Law students, Michael and Kari Langer, had season tickets right in front of my longtime season tickets.  Michael and Kari came down to say hi while I was saying hi to my good friends Jaden Daly and Bob Sugar.    Michael had a few extra seats in his section and he kindly offered them to me so I could sit near Tieff.  We happily accepted. 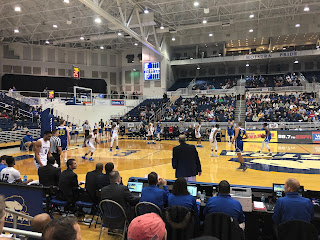 Even though Hofstra came in on a seven game winning streak and Delaware had just lost to a very bad Delaware State team, you never know what happens in #CAAHoops, especially the first conference game of the season.  Delaware entered the game 8-5.  The Blue Hens had also played two teams Hofstra played; Maryland and Stony Brook.  They lost two close games to the Terrapins and the Seawolves, while Hofstra split with those two teams, losing to Maryland after having an early second half lead and they won at Stony Brook 71-64. 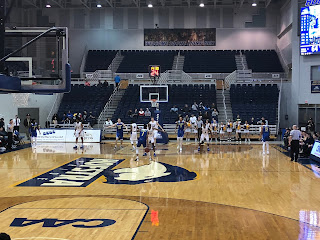 As noted, Hofstra came into the game versus Delaware on a seven game win streak with a twenty point average margin of victory.   But outside of the solid road win over a now 10-3 Stony Brook that has won road games over South Carolina, Rhode Island and Northern Iowa, Hofstra has not faced any real challenges in their win streak.    Their three losses on the season were all on the road to a Marshall team that made the third round of the NCAA Tournament last season, Maryland and VCU in overtime.  Three teams that are now a combined 26-12.  In each game, Hofstra had a lead in the second half.  So the Pride had played well but now came their first conference test.

Delaware won the tipoff and Eric Carter, likely Delaware's best player, made a layup to give the Blue Hens an early 2-0 lead.

It was their only lead of the game. 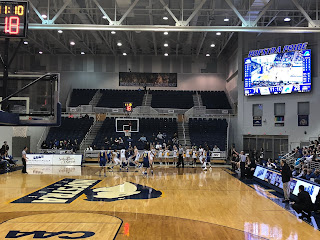 Eli Pemberton quickly tied the game with a jumper.  It was the start of a 10-0 Pride run, capped by, what else, a Justin Wright-Foreman three pointer.  Delaware would get another layup to cut the lead to six, 10-4.  It was the closest the Fighting Blue Hens would get the rest of the way.  The score was 18-10 Hofstra with a little over eleven and a half minutes remaining in the first half.

Over the next eleven plus minutes the Pride would go on a 28-5 run.

During those eleven plus minutes, the 1500 in attendance were treated to a dominating performance on both sides of the court.  The Pride moved the ball around on offense and seemingly buried every open shot.   At one point during the run, they made eight of ten shots from the field.   The Pride would finish the first half up 48-18.  They shot 17 of 27 from the field in the first half and 6 of 10 from beyond the arc.  They topped it by going 8 of 9 from the charity stripe.

Meanwhile, Hofstra limited Delaware to 7 of 30 from the field in the first half, including 2 of 13 from beyond the arc.   Makes sense that Hofstra is first in #CAAHoops in Three Point Field Goal Percentage Defense. 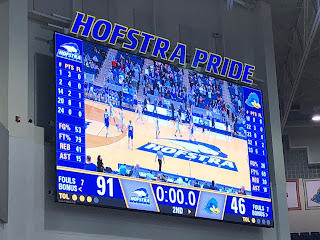 After Joe Geyer was kind enough to give Matt, Tieff and I halftime passes to the Hofstra lounge to eat brownies, the second half was really no different as Hofstra extended their lead further, winning the game by FORTY FIVE points, 91-46.  The Fighting Blue Hens only shot 26% from the field and 21% from beyond the arc.  The win became even more impressive after Delaware won their next two games, a road win at Northeastern and a home win over William and Mary, two teams that were picked to finish in the top four of the CAA.

What the stats don't show is how well Hofstra moves the ball on offense.  They also have four deadly shooters in the starting lineup; Wright-Foreman, the reigning 2018 CAA Player of the Year, Pemberton, point guard Desure Buie and transfer newcomer Tareq Coburn.    Throw in Jalen Ray off the bench and you had 75 of their 91 points on the game, including shooting 12 of 18 from beyond the arc. 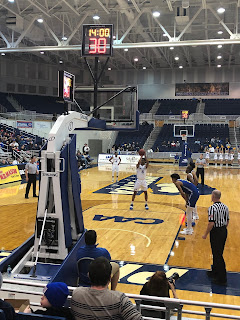 What the stats don't show and my eye test last Friday night showed was Hofstra playing a much more aggressive zone defense, getting out and contesting shooters much more than they have in the past.  They also really hustle on loose balls and have done a lot better on winning 50-50 balls. Coburn in particular really works hard on the defensive end.  Six foot 10 graduate transfer Jaquil Taylor has also given the Pride a shot blocking presence. He's second in the CAA in blocks at 1.4 blocks per game.  He contests a lot of shots, forcing a lot of misses in the paint, he really moves his feet well on defense and gets his share of rebounds (he had 12 against Delaware).  Carter, who leads Delaware in scoring at 18.2 points per game, got into early foul trouble playing against Taylor and was limited to seven points in the contest. 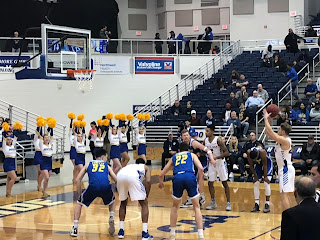 It was amazing during the game as often I would turn to Tieff or Defiantly Dutch, Jerry Beach, when I was sitting with him and say "Who is this Hofstra team?!"  I was finally seeing a complete Hofstra team.  The team that limited Stony Brook to 64 points on the road. The team that won at Manhattan 80-50.   It was real.

The Pride would win their other game against Drexel in similar fashion on Sunday. They roared out to a 47-27 halftime lead, holding the Dragons to 1 of 9 from beyond the arc in the first half.  Drexel would have much stronger second half, shooting 51% from the field in the half and cut the lead to six, 70-64.  But Hofstra would outscore Drexel 19-11 the rest of the way and win 89-75. 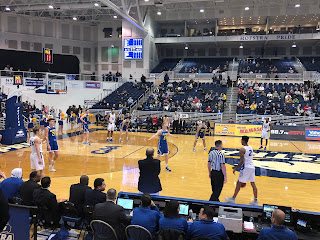 Hofstra is now on a nine game win streak and a chance for ten in a row today.  But it won't be easy as they play pre-season favorite Northeastern at The Mack.  The Huskies have struggled due to injuries starting out 7-7 on the year.  But they are deep and talented with Vasa Pusica, Jordan Rowland, Shawn Occeus and Donnell Grisham Jr.   It's a critical game for Hofstra to win, plus they need to hold onto the Barone Bowl (sorry Mike Brodsky! ).

Even with Hofstra's terrific start, the College of Charleston, the defending CAA Champions loom large again.  They have actually top the Pride's winning streak as the Cougars have won 10 games in a row.  They even have a big road win over VCU, a team that Hofstra barely lost to in OT.  Charleston has wins over UAB, Memphis and Rhode Island.   With Grant Riller and Jarrell Brantley, the Cougars have an elite 1-2 punch.   They are still the team to beat but this Hofstra team may be the Cougars' best challenger in the CAA.

With half of their rotation - Wright-Foreman, Buie, Taylor and reserve forward Dan Dwyer all seniors and after last season's third place regular season team lost a disappointing quarterfinal game to UNCW (the Teal again!), the Pride know their window to succeed is closing.   With an elite offense and a much better defense, Hofstra knows this is their best chance to finally break the eighteen year glass ceiling and make the NCAA Tournament. 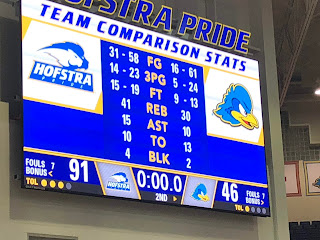 I can tell you this team has me excited.  For the first time in a few years, I have got tickets to see a regular season Hofstra road game at Elon next Saturday evening.  And depending on my schedule, I hope to see them at UNCW and at the final CAAHoops tournament at North Charleston for at least the next few years.  Next year, the CAA Tournament will be in Washington, DC.

For a long time fan of my alma mater, there's excitement again about the Pride.  However, I know how fleeting college basketball success can be.

For Hofstra, the time is now.